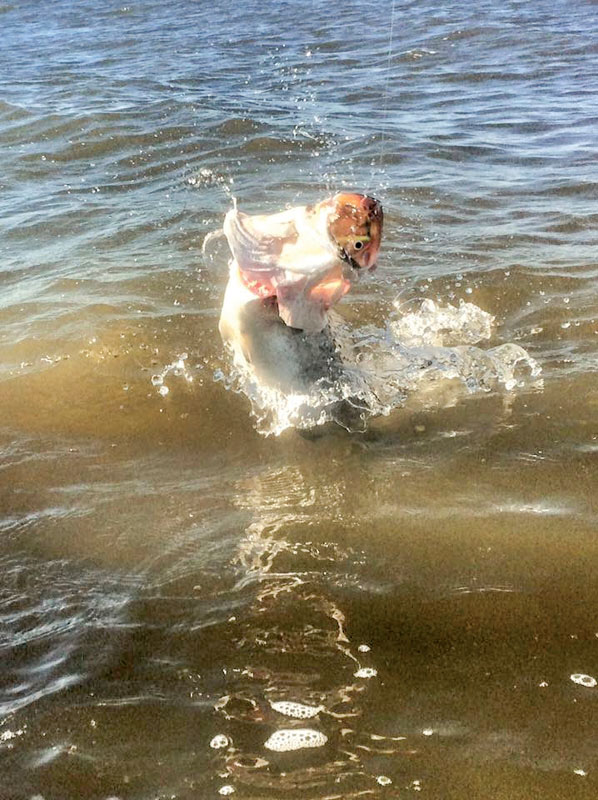 Angry trout with A MirrOlure XL in her mouth.

As we approach December, we need to remember that we live in Texas. Some mornings might be cold but we likely will not see anything down near freezing until January. Until the water temperature gets below 55 and stays there, key word is stays, fish will bounce between fall and winter patterns. Currently the water temperature is still in the upper-70s to low-80s and we are catching trout in eight feet of water. Fall pattern for sure. Everybody is antsy to layer up and don Simms waders but that is still a good way off unless something very unusual occurs.

When the water temperature finally drops to around 55, larger trout here in the Galveston Complex become much easier to pattern. They will begin to show preference for drop-offs and ledges where soft mud meets heavy shell. Shell is always something you need to key on, regardless of the season. Anytime you are wading and come upon a crunchy spot, look toward the bank for landmarks that will help you triangulate the position on your next wade. Small areas of shell surrounded by soft mud are magnets for big trout in winter and you sure don't want to discover the spot again by accident when conditions are prime for catching a trophy fish.

Fishing mud flats adjacent to big drop-offs near channels is where you definitely need to be when it gets really cold. Nature programs the fish to stage along these ledges, sliding down into the warmer channel depths when blue northers blow all the water off the mud flats, and then sliding back up to the edge of the flat as temperatures begin to moderate and tides return after the front passes. It's all about survival and Mother Nature writes and enforces the rules.

The first sign of bait activity creeping back up the slope toward the shallows is the surest sign that something great is about to happen. Don't expect to suddenly see rafts of mullet flickering at the surface, it doesn't work like that during norther recovery. Subtle subsurface flashes and maybe a swirl or two as the bait rises near the surface are likely the only signals you will receive, but that's really all you need.

High atmospheric pressure is normal for at least the first day following a strong front and this usually results in the fish having lockjaw. Fish and other wildlife seem to sense that a front is coming and they prepare themselves to lay up for a while by feeding very aggressively right before it hits. Pre-front is always a good feeding time, just don't press the envelope and get caught in the nasty north wind. A good post-front rule to go by is "two days after." When you look outside and there are no clouds, you might as well stay home because the atmospheric pressure is through the roof. Generally, by the second day, the pressure will have begun to decline and the fish's bellies are growling.

West Bay has been good lately for wade fishermen throwing topwaters and Corkys in the south shoreline coves. Redfish have been abundant in the marshes and around the ICW. As it gets colder, the coves with muddier bottom and the famous Confederate Reef (and other mid-bay oyster reefs) should produce the most consistent stringers.

East Bay has been quite a bit slower than we expect this time of year but decent numbers of smaller trout have been prevalent in the drains on the south shoreline. Activity in the back of the bay should improve with each successive cold front. Trout especially should take up residence on the vast acreages of clam beds and oyster reefs that predominate the bottom structure. Look for mullet on a shoreline and hop out and wade them down, keying on shell and mud. Corky Fat Boys and Soft-Dine XLs are usually very effective back there.

Trinity is brimming with small trout. We are beginning to find a few decent fish, probably just now finding their way back home after the spring floods chased them way down south. Hopefully we will see a size improvement as it gets colder but for right now it has been a fifteen to eighteen-inch game among the keeper-size fish we are finding. The entire back of Trinity Bay, also referred to as Jack's Pocket, can be superb wade fishing in front of the countless bayou drains and guts that run up there. Redfish have been plentiful in ankle deep water throwing weedless-rigged MirrOlure Marsh Minnows. Fishing should improve as fronts become colder and more numerous.