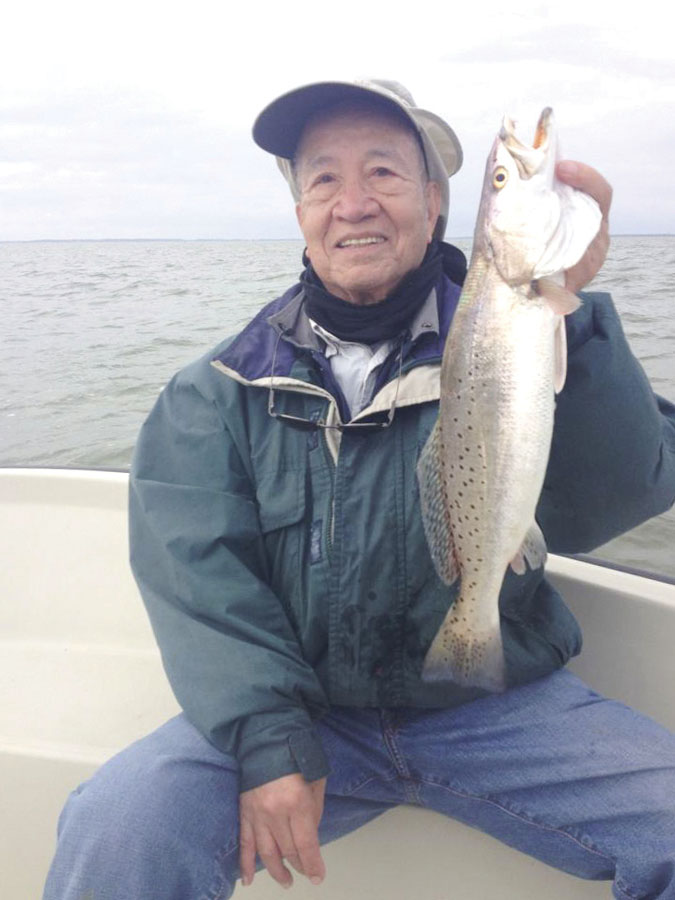 The past couple of months have spoiled those of us who enjoy catching numbers of trout here on the Upper Texas Coast. Water temperatures have been hovering in the mid-fifties on most days and trout have been holding in 3 to 6 feet of water over soft bottom and scattered shell. Overall, it's been a mild winter. Drifting while throwing Salt Water Assassin Sea Shads has worked great. The best colors have been Purple Canary and Slammin' Chicken. Corkys, MirrOdine XL's and Maniac Mullets have been very effective when wading or drifting shallow. The water has been very clear in most parts of the bay on the calmer days. We're definitely catching larger trout on the breezier days when the water clouds up a little. Most of the productive areas of the bay haven't changed much since last month with West, Trinity, Upper and East Bays all having their days to shine at times. What will most likely change are the areas within those areas as trout should tend to bunch up with colder weather.

The recent easy catching may be getting ready to take a little turn with the colder weather. As I sit here and type, a Pacific front is pushing through the area. It was preceded by an Artic front. Needless to say, we may finally see some water temperatures in the forties for longer periods of time. Are we going to close out this winter with real winter-like weather? That's anyone's best guess. "Unpredictability" seems to be the only thing predictable about Texas weather.

The rainfall associated with the cold fronts has been steady enough to help the bays. That being said, we still do not see the freshwater inflows from the Trinity or San Jacinto Rivers that we used to experience. The far west end of the complex which includes Christmas, Drum and Bastrop Bays have been temporarily affected by run-off from Bastrop and Chocolate Bayous and the Brazos River. It's made the fishing a little tough on those guys for the time being, but the long-term ecological benefits make it worth the short-term sacrifice.

February can be a little challenging at times, but the lack of quantity shouldn't discourage you from spending time on the water. As with most things in life worth having, patience is required. A day of chunking plugs for just a few bites may reward you with that trout you've seen in your dreams. I'm by no means saying that one can't catch numbers of trout this month, because we all do at times. But, there will be days when the bay seems barren of life and you're praying for a bite. If you're just looking to get bit a lot then the Texas Parks and Wildlife stocks some area ponds with rainbow trout this time of year and there's a couple of pay-by-the-pound catfish ponds just north of here that may pique your interest. As for me, I'll be out there with a few willing clients trying to catch a few photo-worthy specimens.

During the colder stretches, we will be fishing tighter areas. Spoil reefs and wash-outs near the ICW, towheads, deeper bayou drains and small shell humps along deep stretches of shoreline are what I consider tight areas. The recipe also usually calls for good tidal flow, a few mullet and of course the infamous mud and shell. Mullet are now the main food source for trout, but don't expect to see big concentrations of them.

We will see some of our lowest tides of the year in February. This is a great time to take the opportunity to become more familiar with bottom structure, reefs, guts, etc. in areas you like to fish. We may think we know most of the bay bottom contours, but tides, currents, wind and run-off can change the bottom landscape from year-to-year. Spending some time scouting such areas may lead you to a spot that hasn't received much fishing pressure. It's usually those kinds of sanctuary areas that hold the most promise for tricking that elusive trout of a lifetime.

Some of my largest trout from Galveston Bay came in the month of February. Hard fishing with a few bites is all you'll get some days. That could result in disappointment for folks seeking the instant gratification of "easy limits." For others, it could mean an increased level of excitement and a new learning experience. Having confidence, patience and persistence can pay off this time of year.