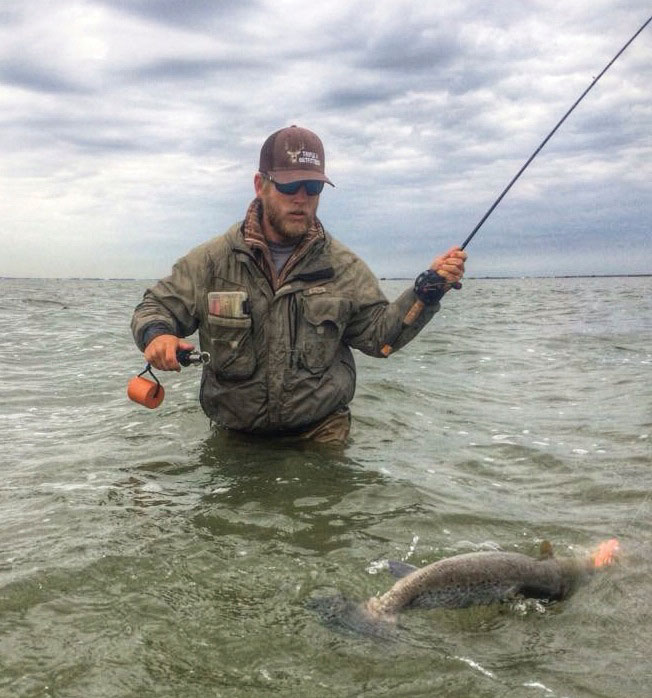 February is notorious for big trout in the Galveston Bay System. This month can be absolutely fantastic on the flats during the first warmup days between cold fronts. A solid winter pattern is yet to emerge, trout got cold enough a few times to snap into winter pattern, but only briefly. When they do this they can be found over thick mud and shell but, you have to get there when it is happening. February can be downright tricky but, at the same time, when it stays cold for a long enough period it can be substantially successful on mud/sand transition bottoms. We'll be seeing a lot of varying conditions; clear frosty mornings, chilly days of solid cloud cover, and we'll probably see a few high-70 days along the way. This weather whirlwind complicates catching heavy trout but if you time it right you can experience some phenomenal days.

Generally speaking, here on the Texas coast, we consider the winter months to be late-December, January and early-February. I am expecting that we will experience a colder than average February this year since it was so warm in December. It's almost certain that since we were sweating all duck season throwing out decoys, that by the time duck season ends it will start to freeze. With the ever-changing Texas weather, we must keep our heads on a swivel but don't venture too far from traditional wintering grounds. Wintering grounds are the sticky mud bottoms, deep drop-offs, and ledges close to deep water get-aways. The fish are still programmed to escape to these deep holes once cold fronts come and won't sneak off far from these places despite the warming of days between cold fronts. It's always key to keep hitting the same spots through February where you slammed them in January, they're not going to pick up and go very far until the water temperature gets a lot warmer for a significant period of time.

Fishing slower than normal is key to triggering more bites. Recently I have been throwing my Corkys out and just slow-rolling it back, almost as though trying to get hung on the oysters. These slow-roll presentations are almost a necessity when the water temp dips below 52. A rule of thumb for whenever you're not getting bit–slow your retrieve gradually until you get a bite and then mimic it. Working your lure any faster is likely not going to work.

Knowing the bottom you're fishing is another key to winter fishing. If you're unfamiliar with an area, hop out of the boat and walk it down. You'd be very surprised how your brain is programmed to record the differences in terrain that your feet encounter. If you slide off into a gut, walk over some crunchy shell or start to bog down in some really nasty gumbo mud TAKE NOTE and come back!

West Bay has been very consistent this winter. The water has been beautiful and the fish have been hungry. Remaining on shell/mud bottoms is still key here, throwing MirrOlure's and soft plastics. Redfish have been mixed with the trout on the mud flats. We should see even more big trout activity in February along the south shoreline coves and mid-bay oyster reefs. Keep West Bay in your February fishing plans.

East Bay is pretty crowded right now on the weekends but there are still plenty of fish to be caught. The back of the bay is full of mud flats inundated with rangia clams and oysters, which make some of the best wintering habitat for big trout. MirrOlures, Corkys, and topwaters are all go-to lures this time of year. Redfish are mixed with the trout up tight on the shorelines over mud. February should promise even better fishing on these flats along with adding more weight to the fish.

The Upper Galveston Bay region has been the most dependable. The deep water getaways and drop-offs scattered all across this region make it one of the best in the whole complex for wintertime trout fishing. Oyster filled mud flats make for some great habitat for trout and redfish in the cold months. Corkys and soft plastics on 1/16 ounce jigs are killers here. February will bring lots of great days, especially toward the end when bait activity increases.