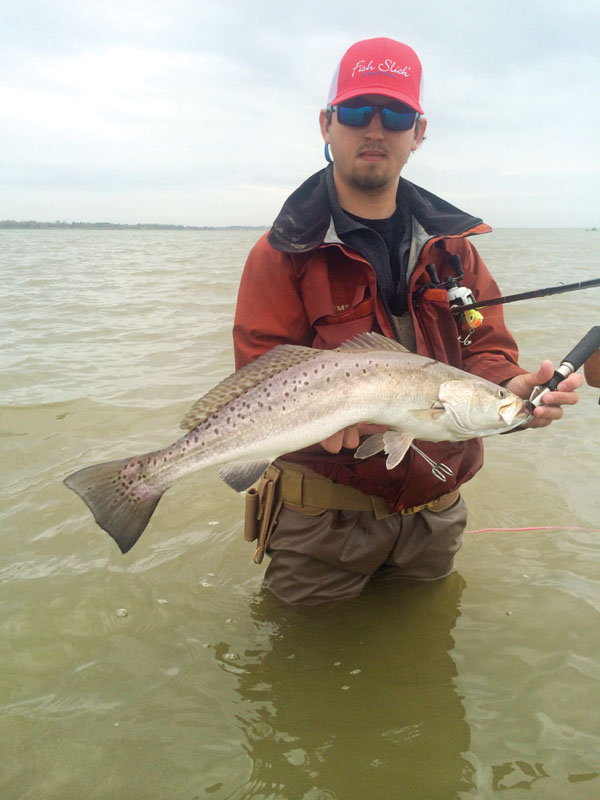 Blake Byford fooled this one with a Corky Fat Boy.

February is one of the best months to catch big trout in Galveston Bay. Quite often the weather sets up perfectly, sandwiched between January's coldest days and the beginning of the spring transition. While these fish will still be favoring the January winter pattern of holding in deeper protected areas much of the time, they begin to venture onto adjacent mud-shell flats more often. March brings the dreaded spring transition with its hard-to-predict patterns of windy days, changes in fish metabolism and structure preferences. February is just so much easier.

Put into the simplest of terms - the fish have been really cold nearly all of January and laid up with low metabolism. February's longer warming periods increase metabolism, and herein lies the key. Picking your days carefully, when they're not hunkered down for cover and the wind isn't howling, can set the stage perfectly.

Do not be misled into thinking winter is over, not by a long shot, but the warming periods become more frequent and tend to last a day or two longer. Good old unpredictable Texas weather can bring 30 one day and 70 a couple days later. These crazy trends always bring setbacks, that's why it is important to concentrate effort during the warmups.

The same as in other seasons, the primary clue to game fish vacating protected holes to feed in depths that we can wade will be signs of mullet activity along edges where the deeper water tapers shallow toward muddy flats. Bait is usually hard to spot earlier in the day; prime time usually occurs between mid-afternoon and sunset. The first hour or two of darkness can also be worth sticking around for but only if you are skilled in nighttime navigation.

It is important to recognize the primary influences that cause fish to change their habits and patterns:

2.) Forage Availability Fish must eat to stay alive but you might be surprised at how far a fish will move to capture a meal. Studies reveal that speckled trout will chase a baitfish only three times it's body length to capture it. So when you are blind casting around a flat, you've got to get within 90 inches of that elusive 30-incher. But they must have food to survive, so whenever the bait evacuates a flat because of extreme cold or extreme warmth, they will adjust. Perhaps this helps explain why locating concentrations of bait is so vitally important.

3.) Water Temperature. Whenever fish become too cold or too warm it tests their survivability and they will seek more favorable habitat. Right before the '89 freeze, Mickey Eastman said there were huge pushes of fish leaving the back of East Bay heading straight to Rollover Pass. Almost like a herd of animals fleeing a forest fire.

West Bay has been good for wade fishermen in the south shoreline coves. As the water temperature begins to warm up, the fish will stage on sandier bottoms with more concentrated shell. Working your lures slow and low this time of year is the name of the game. I like to throw Corky Fat Boys and Soft Dine XLs for the slower bites, working them against the edge of the shell. The slower fall of soft plastics rigged on 1/16 and 1/32 jigheads can also be killer. We should see good numbers of larger trout coming from West Bay in February.

East Bay has been hot in the back of the bay towards Rollover and along the Anahuac Wildlife Refuge shorelines but there has been a lot of traffic. That whole area of East Bay is full of mud flats covered rangia clams and oysters great structure for big trout. MirrOlures, Corkys, and topwaters (warm days) are go-to lures for February. Redfish and large trout are often found in mixed company in the shallows; keep that in mind when fishing warmups between fronts.

The Upper Galveston Bay region has been the most reliable of late. The deepwater getaways and drop-offs that comprise the area are some of the best in the whole system for wintertime fishing. Oyster-filled mud flats also make great habitat for trout and redfish during cold months. Corkys and soft plastics on light jigs are killers up there. February will heat things up even more with more bait presence followed by better fish feed activity. Last spring was absolutely unreal up there and I'd expect the same this year.