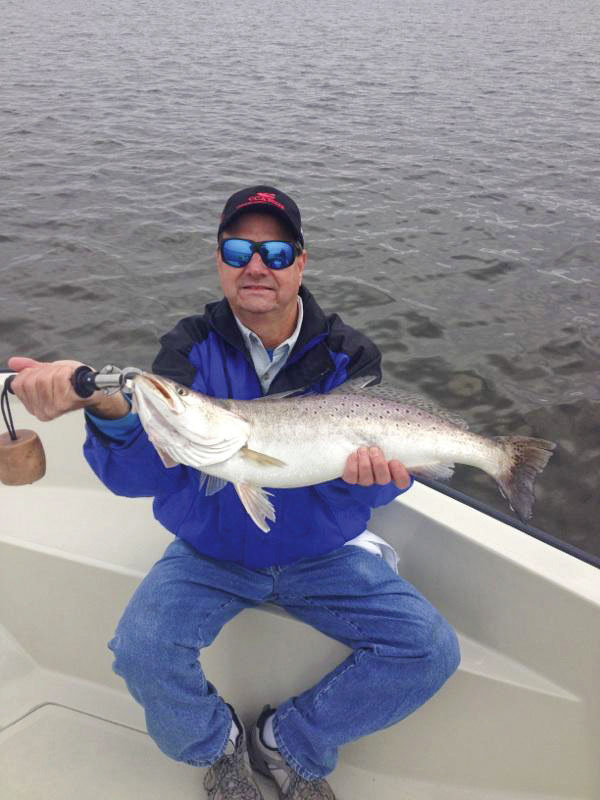 It's hard to top this time of year–fishing is good and hunting is good. Holidays spent with family and friends is the icing on the cake. If none of these things puts a smile on your face then you're probably not reading this magazine right now and I'm sure there's a hotline you can call for help.

Mother Nature kind of broke us in all at once with a late November bone-chilling Artic blast causing surface water temperatures to drop into the mid-forties for a few days. Trout and reds dropped into deeper pockets of water and stayed there for a few days until milder temperatures returned. Since then, we've experienced about one cold front per week and water temperatures seem to be holding in the low to mid-fifties. As a result, the trout pattern has been consistent and catching has been above average. The quality of trout has been impressive as well with quite a few in the 22 to 25 inch range and an occasional 26-plus. All of our larger trout have been released in great shape.

Trout will continue to stage near deep water until brief warm-up periods cause them to spread out across shallower flats. These flats almost always consist of some type of mud and shell mix with subtle depth changes. Such areas are prevalent throughout the entire Galveston Bay Complex from San Jacinto Bay all the way to Christmas Bay. There are good numbers of trout being caught in every corner of the bay right now. Soft plastics, hard baits and slow sinking plugs have all worked great. The best colors have been just about any variation of purple, chartreuse and pink.

Location is obviously important but, as the old cliche goes, timing is everything. Prior to an approaching front, tides are generally higher and water temperatures warmer. This is when you'll probably want to fish flats in 3 to 5 feet of water while keying on mullet and color streaks. Salt Water Assassins rigged on 1/16 or 1/8 jig heads will stay in the strike zone longer than heavier jigs and result in more bites. Post-front conditions can cause fish to move to the edges and sometimes even into the deeper guts due to lower tides and water temperatures. MirrOdines, 51 Series MirrOlures and Corkys come into play in such conditions. Fishing during a tide change can greatly increase your chances as well. Major and minor feeding periods are worth mentioning too. If you're wondering where to find this type of useful information just flip a few pages back toward the center of the magazine.

I like to use a little different retrieve during these colder months compared to fall and summer. Overall, a slower retrieve seems to be more effective, but I really think it's more about a longer pause in between twitches. A statuesque pause at the top of your retrieve will allow the bait to settle slowly and hover in the strike zone longer. This is just what I've personally found to be effective. Sometimes a slow and steady straight retrieve with the tip of your rod low to the water will yield strikes when nothing else will also.

Often the bites are very subtle during the colder months and having the proper set-up is paramount. I use a 6' 6" Waterloo Ultra Mag rod equipped with a Shimano Chronarch 50E spooled with 12 pound Trilene Sensation. For those who prefer braided line, I recommend Fins Windtamer 8 pound test / 30 pound diameter. I also use a 20 pound fluorocarbon leader on everything. A light-weight and sensitive rod will greatly increase your chances of catching more fish. And, last time I checked, catching is kind of fun!

Many of my trips this time of year will be from noon until dark. There are times when our best bite will be in the final hour of daylight and even after dark. Everything seems to stabilize in the afternoon/evening hours this time of year. In addition, some of the larger trout tend to feed late. Wading and drifting will both be effective throughout the month. Which approach we choose is often predicated on wind speed and direction.

It's hard to believe that yet another year has come to a close. I truly hope that all of my fellow fishermen had a wonderful year and that 2015 brings even more joy and prosperity to all.