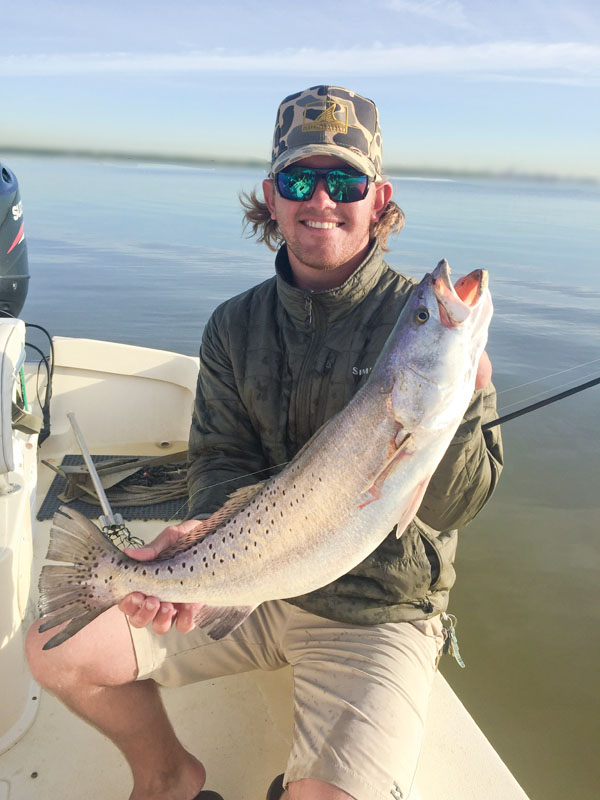 January can definitely be considered winter. As much as we wanted to call December winter, we were wearing flip-flops and shorts way too often for it to truly qualify. Being one of the coldest months of the year, expect a variety of curveballs in January. Atmospheric pressure through the roof, slower metabolism, low tides and ripping wind but, if you can time it right there can be some great catches made!

Don't let the unstable weather patterns discourage you too much; the trick is to plan your fishing days between the fronts. But then again, the conditions don't always have to be perfect to go enjoy a day on the water and have a great time!

Don't get frustrated whenever you don't necessarily "get 'em" but use it instead as a learning opportunity. Each time you walk over a piece of shell or notice any drop-offs or ledges on your depth-finder, take the time to study and memorize them by triangulating landmarks on shorelines. Walking around on low tides can add many new spots to your play book. Even though fishing on extremely low tides isn't normally too successful, you can sometimes find spots that you never knew existed.

I've often bailed out of the boat, without even bringing a rod and reel, after a hard norther, and just started walking around areas that are usually too deep to wade on a normal tide. This helps you know exactly what you're casting over in that certain gut or drop-off whenever the water comes back in. Always be careful navigating in super-low tide conditions.

As the low winter tides pull out the water, they also pull the fish. Most fish go into survival mode when a front hits, and won't feed aggressively again until the barometer begins to fall and the water starts to come back. If you must fish on a super low tide, focus towards areas of deep-water getaway such as canals, channels, a deep bayou or river. Fish will automatically stack up in these places while the flats are being sucked dry. Once the water returns on the flat, the bait will follow with it. When bait activity can be seen the predatory fish that we target are there right behind them and you should be too with rod and reel in hand.

West Galveston has been fairly consistent in delivering good numbers of trout for waders working coves on the south shoreline, Confederate Reef and others. Plum soft plastics with a chartreuse tail, like the MirrOlure Provoker, have been most consistent after the topwater bite dies off. Soft-Dine's have provided better quality trout on colder days. Traditionally, Corky-type lures with their slow-sink capability are hard to beat when the water temperature plummets. Colder water temps slow their feeding habits and the slow-roll retrieve really shines. Areas like Offat's Bayou, Lake Madeline and the Old ICW can be good "deep water getaways" during January's cold spells.

East Bay has been productive for wading and drifting alike. Drifting the back of the bay in three foot depths over heavy mud/shell, looking for visible signs of mullet, is a great way to start. Wading bayou drains and oyster towheads along muddy shorelines has been productive for better quality trout on Corky Fat Boys and MirrOlures. Warmer days have given way to great topwater bites on Top-Dogs when it's calm and She-Dogs when it's a little choppier.

The Upper Galveston Bay region off the San Jacinto River can be some of the best fishing in January because of all the channels, guts and deep water that allow the fish to hide during cold spells. The area includes nasty mud that retains warmth and has a lot of oyster-filled flats. Drifting adjacent to these drop-offs can be great but wade fishing has proved to be more successful, allowing you to slow down and cover everything more thoroughly. Corky baits such as the Fat Boy and Soft-Dine can be great but I've had some of my best catches up there on Originals and Devils. You can bend the tail down on a Corky Original for whenever the current is ripping and it will act almost as a crankbait and will get down a lot faster. The Devil can be worked much slower and gets down faster and sometimes that's all they want!

Be safe and good luck!