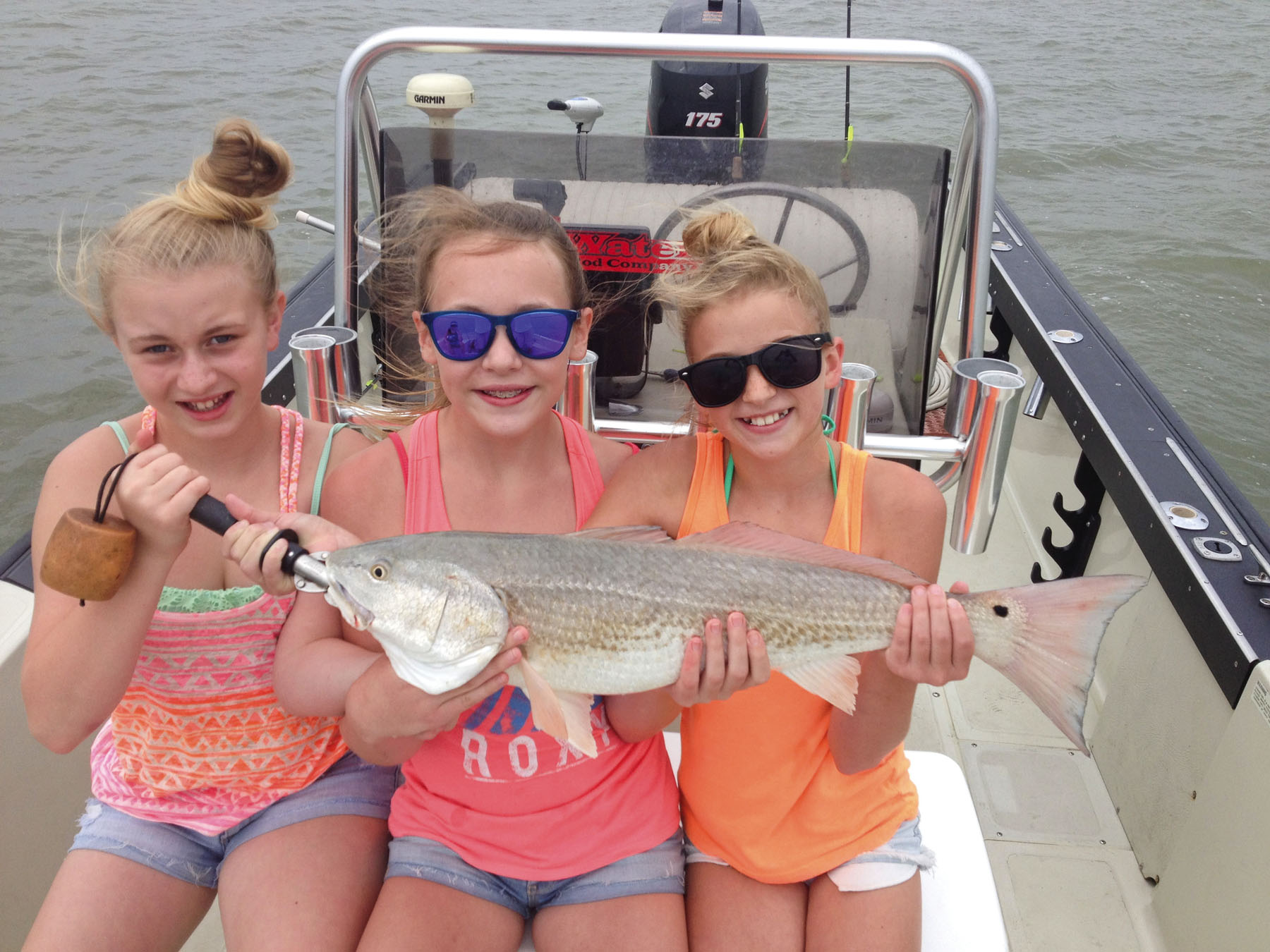 Paige Taylor, Brooke Hillman and Madison Wills took turns fighting this 27.5 inch redfish (released).
Stiff southwest winds have given way to southeast winds on most days and fishing has dramatically improved. It's not lights out every day but it's certainly worth the effort.I would rate fishing around here at about an "eight" right now. Shad are getting bigger and some brown shrimp are finally showing. I don't think we've had a very good brownie crop overall but there are a few birds working. The poor brown shrimp showing is directly related to drought. We've had some recent rains but we need much more. What we really need is for a tropical depression or even a tropical storm to sit on top of us for a few days. I know that sounds horrible, but as most know, freshwater is the life blood of our estuary. That emerald green water is pretty to look at but high salinities are not healthy long-term.

A lot of our bites have been very subtle and I think it's because our trout have just been gorging themselves on shad not really all that hungry. Whatever the reason may be, it's imperative to have the right gear to feel the bites. I won't mention any particular brands of rods, but when I see a guy show up in the morning with a telephone pole for a rod you can pretty much count on him struggling. I usually just politely tell him that the Galveston Bay blue marlin bite seems to be below average this year so please go put your rig back in the truck. The most sensitive rod that I've found is Waterloo's Ultra Mag. Unlike other similar rods it has a backbone that can handle just about anything you're going to catch in the bay. Slap a Shimano Core Mg on it and you've got a lightweight ultra-sensitive rig that enables you to catch more fish. It's that simple.

East and lower Galveston Bays have been the most productive as of late. Most of the reefs are holding good numbers of trout in 5 to 7 feet of water. When we can't find slicks we're working areas of rafting mullet and surfacing shad. Sometimes you can use your troll motor to make a slick or two pop. This helps pin-point the schools. Most of the trout are running in the 16 to 22 inch range with a few 24 to 27 inchers mixed in. The topwater bite has been really good on some days. Super Spook Jr's and MirrOlure Top Dog Jr's have been working the best. As usual, you can't go wrong with the trusty ol' Salt Water Assassin. We've fished a few open-water schools of reds but they're not showing themselves every day. The bayou drains are holding quite a few flounder although about half of them seem to be undersized.

Open-water fishing in Trinity Bay has been off compared to this time last year, but I think it will begin to show signs of improvement really soon. I can't really put my finger on the reason why it's struggling, but it definitely is. Despite sounding like a broken record, my best guess is that it has something to do with delayed patterns we've seen this year following a prolonged winter. A good example is the fact that our birds didn't even start really working until the first week in June. This normally occurs in early May.

The north and south jetties have been holding fair numbers of trout and good numbers of reds for the folks chunking live bait. Good catches of trout have come from the surf on what few calm days we've had.

The month of July will find us over deep shell near the ship channel and around some of the wells. Casting to slicks in 8 to 10 feet of water using soft plastics rigged on 1/4 to 3/8 ounce jig heads will usually get the job done. As the summer heat drives up the water temperatures, a lot of the trout will pull out over deep mud because it is cooler and holds more oxygen. They will usually be near shell, but not necessarily directly on top of it. Getting a very early start and playing the tides will be the best program to stick with throughout the month. On weak tide days, fishing deep spoil reefs closer to the channel also allows you to take advantage of artificial tide movement created by ship and barge traffic.

Summer is here to stay for a while. Get the kiddos out on the water as much as possible. Have fun, stay hydrated and be careful.