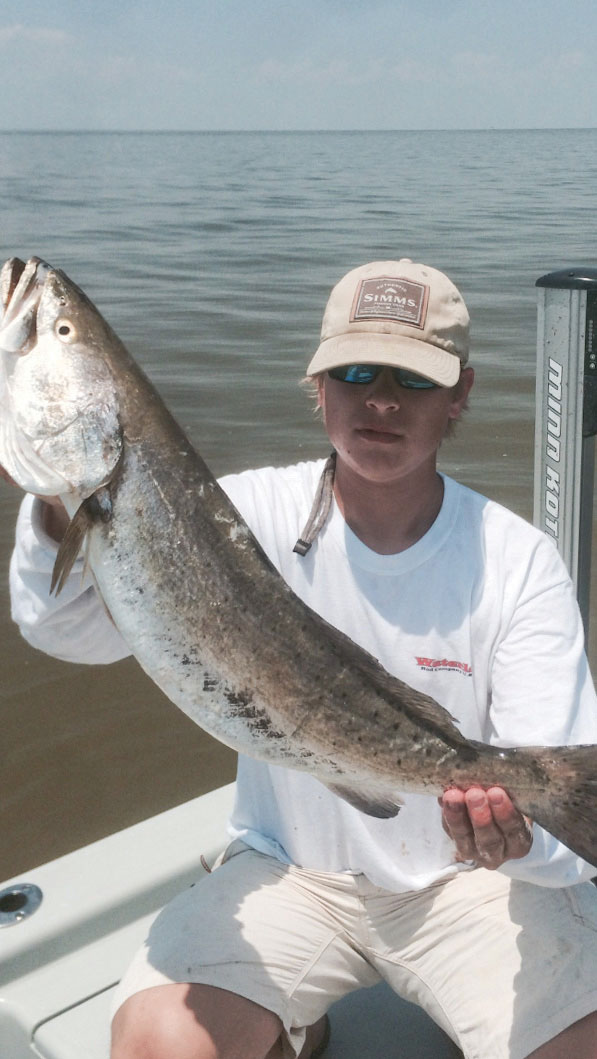 Bryce Tippett with a solid “muddy water” speck.
Fresh water has been a problem almost since the first of the year in Trinity Bay and now it's at an all-time high. Surprisingly though, fishing is still very good in other parts of the Galveston Bay System.

That old CCR tune, Who'll Stop the Rain, plays over and over in my head as the flows currently running from Livingston Dam are averaging 68,200-73,600 cubic feet per second. We haven't seen this volume of water coming down the Trinity in at least 15 years. The San Jacinto River is also running stronger than it has in a very long time.

There are good and bad things that come from a flood. Some of the bad includes having to fish where we can instead of where we'd like. Areas that have not been heavily impacted by fresh water are becoming very crowded. An advantage of the flood is that it has stacked fish in certain areas where they wouldn't normally be found. Generally during a minor flood fish will stay on the bottom in the salt layer and wait out the freshwater inundation on top. During a flood of this magnitude the fish have to evacuate.

I'm afraid Trinity Bay is gutted and over with for a few months. IF the rain stops NOW, we MAY be back in Trinity by late August. At the present time this bay is filled with floating debris. Huge uprooted trees and trash of every description are serious hazards to navigation so be extra careful if you do get a wild hair and want to check out the "mud pit." Too much fresh water can be a bad thing for species that cannot evacuate–rangia clams and oysters in particular. They'll eventually make a power comeback, just like the trout. It just sucks for now.

West Galveston Bay has been good with all the rain pushing new schools of fish into places you wouldn't traditionally be catching them this time of year. There's been a lot of bird activity in the middle of the bay. Waders are experiencing excellent catches down toward San Luis Pass and also the north shoreline with topwaters and soft plastics. Redfish have been abundant on grass flats with Bagley spoons and also on shell piles adjacent to deep water drop-offs. An excellent deeper-water bait is the MirrOlure Marsh Minnow rigged on heavy BAAD Marine "Knotty-Hooker" jigheads, bounced on bottom.

The jetties, surf and beachfront are on fire when the weather is favorable. The fresh water seems to have pushed a great amount of specks down the channel to the jetties. Don't let the live-baiters lead you to the dark side, even having been through record fresh water and presenting holding deep, these fish are still most definitely catchable on lures.

East Bay is producing consistent catches of trout. The exodus from Trinity has relocated a lot of fish toward and into East Bay. The back of East has its own fresh water inflow, so a lot of fish that would normally hold there are getting pushed out into the middle. Drifting oyster reefs has been the most productive strategy but also the most crowded. It's not unusual to see 50 boats per reef right now. The fish are stacked and so are the people. Probably 90% of East Bay is murky but that doesn't mean the trout have vacated. Dark plastics such as the Tidal Surge Split Tail Mullet in "Hulk" and "Plum-Chartreuse" have been doing very well in these dirty water conditions.

The name of the game lately has been fishing ON THE BOTTOM because the freshwater on top has pressed the fish down. We have incredible numbers of juvenile shad this year which translates into outstanding forage availability. Some days they're super hungry and the bite is ferocious, other days they're already full and the bite is soft. I've found that the best bait for a soft bite is the Lil' John by MirrOlure.

The Lil' John is but 3-3/4 inches in length which makes it a great lure for times when trout are short striking or less than eager to take "normal size" offerings. That could all change though with rising water temperatures increasing fish metabolism.

Please be courteous while fishing in East Bay. It gets hectic in the midst of those crowds so please take your turn. Don't burn through the middle of the reef and, if the guy in front of you slips his anchor over the side, use your trolling motor to get around instead of your big motor. We're all in this flood together.