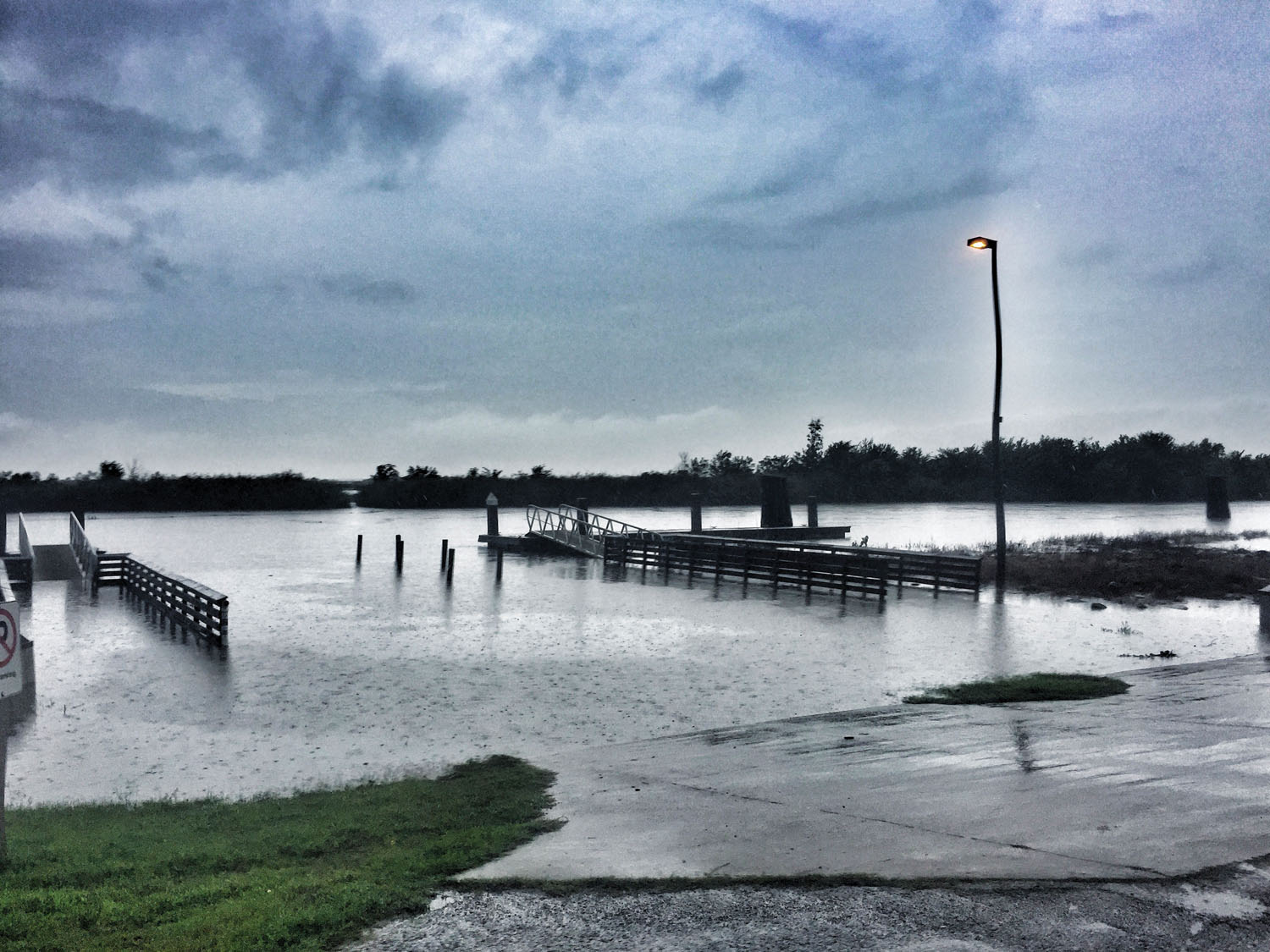 Trinity River flooding has all the boat ramps under water.

Seems that ever since I began writing this column sixteen months ago, all I ever get to talk about is Noah-class rain somewhere in the Trinity watershed and fresh water in the bays. And as much as I really hate to do this–here we go again.

I'd love to be able to say that all is well and we are catching nice fish everywhere but that would not be true. Right now I would say about 65% of Galveston Bay is completely fresh and by the time you read this it could be 85%. This is the largest flood we've seen since Tropical Storm Allison in 2001. It is storming right now, adding to the 14-inches of rain of the last three days.

The San Jacinto and Trinity rivers affect Galveston Bay more than all other sources combined and both rivers are running at flood stage straight into our bay. Last week, the dam at Lake Livingston peaked its discharge into the Trinity River at 93,200 cubic feet per second. Niagara Falls has a discharge of about 67,100 cfs. Visualize if you can what's being pumped into the northeast corner of Trinity Bay. The Trinity and San Jacinto are currently at their second highest discharge since 1994.

The San Jacinto dumps straight into the Houston Ship Channel so all of its runoff traditionally travels straight down-current to the jetties, engulfing the whole west side of the ship channel from Morgan's Point to the Texas City Dike. The saving grace of this area though is the awesome tide movement through the ship channel, allowing the tide to help clean up the water a lot faster than the Trinity's path. I would expect that this side of the bay could improve somewhere around mid-to-late July.

The Trinity pours into the northeast corner of Trinity Bay and generally when we see a huge inflow it slams all of Trinity Bay, pushing all the fish and saltwater toward East Bay. Well, this flood is a little worse than what we've been accustomed the last two years. If the river stopped today we might be back in Trinity Bay by September. Once the push of fresh water comes around Smith Point we will likely see a large impact on the East Bay fishing. There's really no telling how bad it will get and I'm praying that it's not as bad as it looks like it might be.

Until it gets too bad, you all know the drill. Drifting oyster reefs in 6- to 8-feet of water with dark soft plastic lures such as the MirrOlure Lil' John on 1/4 ounce jigheads. A lot of the East Bay fisherman are what I like to call buffalo hunters, someone who will sit on one school of fish until there are none left, and then wonder where they all went. The way the buffalo hunters used to do on the prairies. Don't be a buffalo hunter, go put some time in and scout out some new areas once you've caught a few fish. There are other schools out there other than those under the flotilla of boats we see ganged on the major reefs.

West Galveston Bay isn't affected so much by freshwater. Well, at least not as much as every other body of water in our complex. West Bay will be the place to go this summer given the state of the rest of the complex. The north shoreline of West Bay can be phenomenal throwing soft plastics such as a MirrOlure Provokers on light jigheads in the grass and sand pockets. The north shoreline holds good clarity most always due to the abundance of filtering grass. The mid-bay regions should hold good amounts of schooling trout and redfish too, along ledges and humps of oyster shell. The south shoreline coves can be spotty but if you catch them right, they can be really good for trout and reds on both plastics and topwaters.

The jetties and beachfront should be absolutely banner this year with all the freshwater pushing huge concentrations of fish down that way and also the tide-runners trying to get into the bay. Capt. Mike Williams refers to the stack-up between tide-runners coming in and resident bay trout fleeing from freshwater as "Point Break." When you find Capt. Mike's magical spot, hold on and don't tell anyone, not even your mother. It'll be on fire!

All we can do is keep our heads up and pray that this El Nino cycle is almost through. I hate to sound depressing about the freshwater but I'd rather be honest with you all than say it's all good and they're everywhere. But hey, the fishing is good when you find 'em!