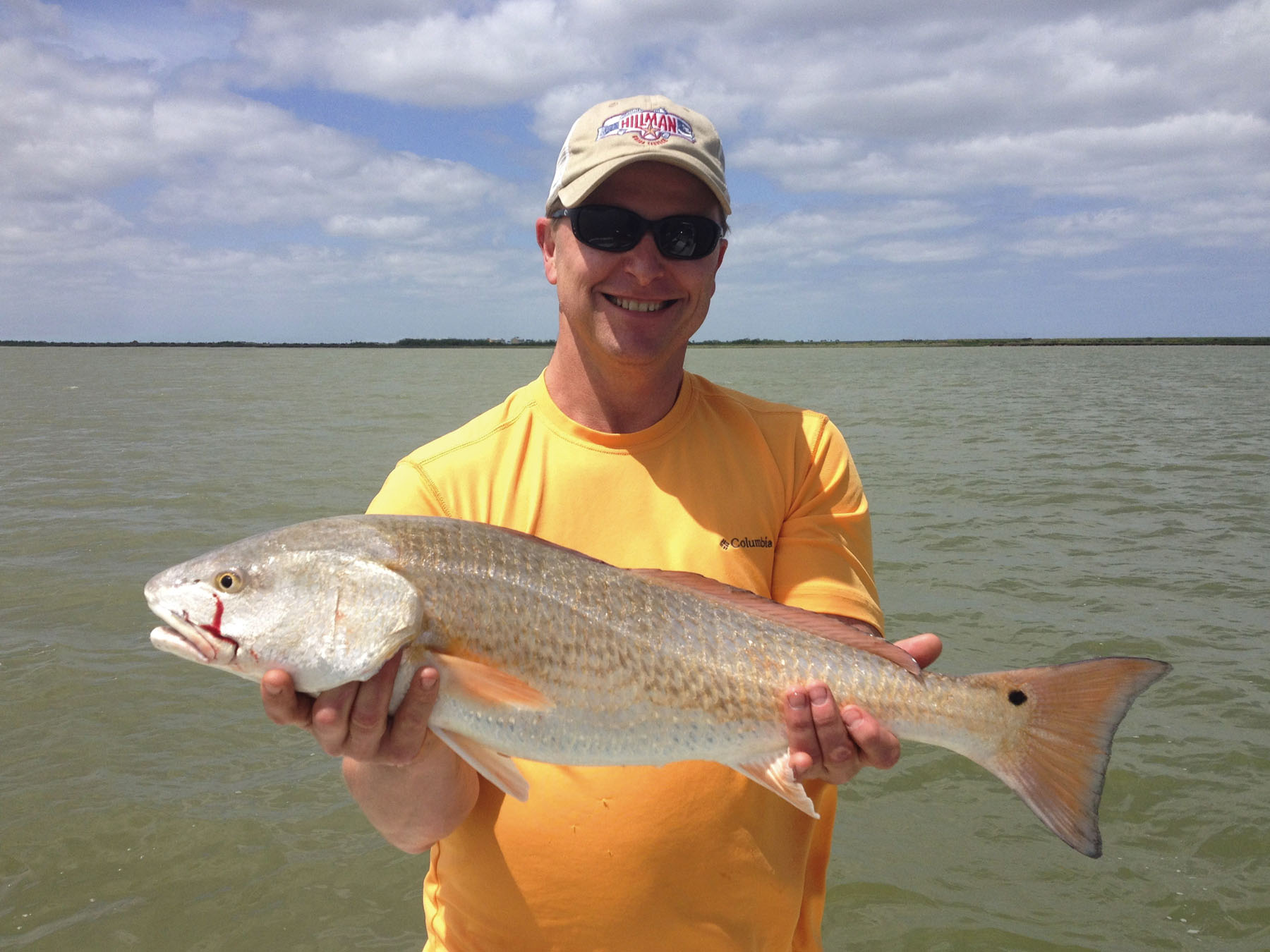 Scott Medsger with a catch and release 27.5 inch red!
"That's why they call it fishing and not catching."
If I had $5.00 for every time I've heard one of my customers recite that clich then I could afford to take my family to Walt Disney World for a week.

Throw in another dollar per mention for "A bad day of fishing is better than a good day at work" and we could actually afford to ride the roller coaster through Space Mountain and buy everyone (including in-laws) a snow cone.

As I mentioned in last month's issue, we knew we would experience a transition. We always do. This year's extended winter, however, has delayed the timing by 2 or 3 weeks. Historically, here in the Galveston Bay Complex, we experience some tough fishing from late March through mid-April. This year was an anomaly, however, as our success rates were above average leading up to the full moon around April 15. On the back side of that full moon is when catching became about as easy as winning the lottery.

I personally don't mind grinding out a few fish on a tough day. I think it makes you a better angler over the long haul. Those of us who understand the patterns and fishing in general get it. But, try explaining that to three guys from Iowa.

"I don't understand why we're not catching anything. It's such a beautiful day." Ugh!

The silver lining was that the trout were exceptionally fat and any cast could result in a trout of a lifetime. I personally know of four legitimate 8-plus pounders and one nine and a half caught recently over a four day period. Luckily, one of my long-time clients was the recipient of such fortune. Kudos to him for releasing her in excellent shape.

As always, we tread water through the bad times to get to the good times. Well, better days are fast approaching and hopefully we'll be doing the back stroke by the time you're reading this. Our trout and reds are starting to bunch up in various locales all across the complex. There are lots of male trout mixed in with the females we're catching. We see this every year around this time as the males begin to stage in areas leading up to the spawn. The drumming (croaking) of large groups of males attracts the females that are ready to spawn. This explains why we'll catch a 14 inch male on one cast then a 6 pound roe-laden female on the next. Though trout will spawn throughout the summer, the first and largest spawn of 2014 will have occurred by the time you've received this issue.

We're currently catching numbers with more regularity, especially when that nasty southwest wind doesn't get us. Water temperatures have been hovering in the low 70s. Wading has been good and drifting over shell in 4.5 to 6 feet has been worthwhile when winds are light. We're fishing from one end of the complex to the other right now based on wind speed and direction. Areas around San Luis Pass are coughing up some decent trout and reds. The Galveston Causeway and the Campbell's areas are typically good during this period, but seem to be slower than normal this year. The north and south shorelines of East Bay have produced some decent catches as well as the east shoreline of Trinity. Mid-bay reefs are holding fair numbers of trout and will only get better throughout the month.

Our focus throughout June will be drifting open-water slicks and pods of bait. Wading leeward shorelines will be the plan on windy days. There are already some nice trout showing up in the surf so look for it to turn on when the wind calms. Salt Water Assassins in the 5" rat tail version as well as the 4" Sea Shads will be our go-to baits most of the time. Natural colors such as Pumpkin Seed and Hot Chicken are working better right now, but solid colors like Limetreuse and Red Shad seem to work better as the month progresses. The topwater bite is good and look for it to only get better.

My article in last month's issue was a little rushed and I failed to do something. I would like to thank Everett and Pam for affording me the opportunity to become part of what I consider the premier saltwater fishing magazine on the coast. I will strive to do it justice by offering well-rounded and honest reports with some occasional silliness. I'm serious about fishing, but I also believe in having a little fun. So, let's jump in the boat and go have some!