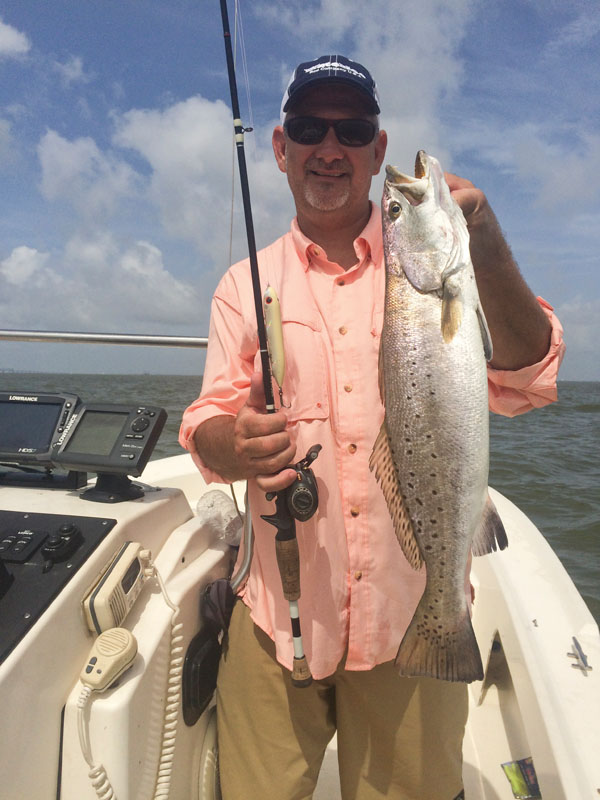 My dad with a solid trout on topwater last June…look for more of the same.
Summer at last. Drifting deep shell or wet-wading sand flats at sunrise, sunburns and fired-up fish giving their location away by slicking all over the place. You've got to love that!

Seems like everything is going to set up very nicely for another jam-up summer season and I am predicting a repeat of 2015's massive stack-up in the southern regions of the system as trout flee excessive fresh water inflow in the north. Add some tide runners and it should be dynamite.

In my May article I wrote that freshwater inundation in lower Trinity Bay was beginning to dwindle – but don't go thinking it's going to be all gravy until we see April's showers. Maybe I should have kept my mouth shut.

We received 8-10 inches of rain weekly through most of April and toward the end of the month many areas were receiving 2-3 inches daily. The region northwest of Houston reported upwards of 20 inches during one event. The San Jacinto River raged straight down the Houston Ship Channel engulfing the whole "West Side" from Morgan's Point to Bolivar Roads. Now the Trinity River is pumped back up to another major flood stage. As of right now the Lake Livingston Dam is discharging 68,000 cubic feet per second, making this the seventh flood (greater than 45,000cfs) in the last sixteen months. Visualize this56,000 cfs is equivalent to 259 dump trucks full to the brim, dumping their load every second24/7 around the clock.

But You know what guys? It's not the end of the world. We experienced it last year and fishing was phenomenal. Almost too phenomenal in a handful of spots, resulting in thousands of trout being pillaged daily. Harvest in that amount from East Bay and Lower Galveston was definitely not good for the long run. Sure, going out in the middle of 50 boats, turning it sideways and stroking out your limit of 40 trout before 10:00 AM sounds fun, but it can only last so long like that. I pray that our salinity will come back as soon as it possibly can to help spread some of the fish out and about.

Besides the doom and gloom of flood talk, fishing has actually been great between thunderstorms and hard blows, and I'm still under the impression that a lot of patterns are running early. We've seen a lot more brown shrimp from the marshes and ribbonfish from the gulf this year so that's always a good sign that the tide-runners might be coming with them.

Drifting has been a lot more successful lately, as I believe the greatest part of the biomass move out deep whenever the water temperature stays above 75 for extended periods. Wading can still be great on sand and grass flats right at sunrise, though!

Obviously, East Bay is going to hold the motherload again this year. If drifting alongside 50-70 boats on one reef is your style, look no further. Drifting oyster reefs in 6-8 feet of water is the name of the game. Dark soft plastics such as the "purple demon" MirrOlure Lil' John rigged on a 1/4 oz jighead worked slowly on the bottom cannot be beaten. Wade fishing isn't as crowded but isn't nearly as productive as it was in the cooler months. Top Dogs and She Dogs on shallow sand flats can produce trophy caliber trout this time of year though, no doubt about it. Redfish action will be picking up the hotter it gets around bayou drains and inside the marsh as well as ponds off of the ICW.

West Bay has the prettiest water as it is barely effected by fresh water inflows. Trout and redfish have been good lately on sand flats with MirrOlure Marsh Minnow paddletails rigged on a 1/16 ounce jigheads. As June develops, the trout will start to pull out towards deeper oyster reefs and also adjust location to grassier flats. Soft plastics are still the best lures to throw at them, but if there's a lot of larger baitfish in the area don't forget about the old school MirrOlure 51 and 52 MR. Redfish action will pick up as well in areas like Greens and Carancahua Lakes on gold Bagley spoons and GULP under popping corks.

All in all, fishing is good and will continue to get even better as the fresh water inundation mixes with June's strong incoming tides. Always remember that rain is a good thing for the bay in the long run. You don't want to miss summer in the Galveston Bay Complex because "Food Grows Where Waters Flow."