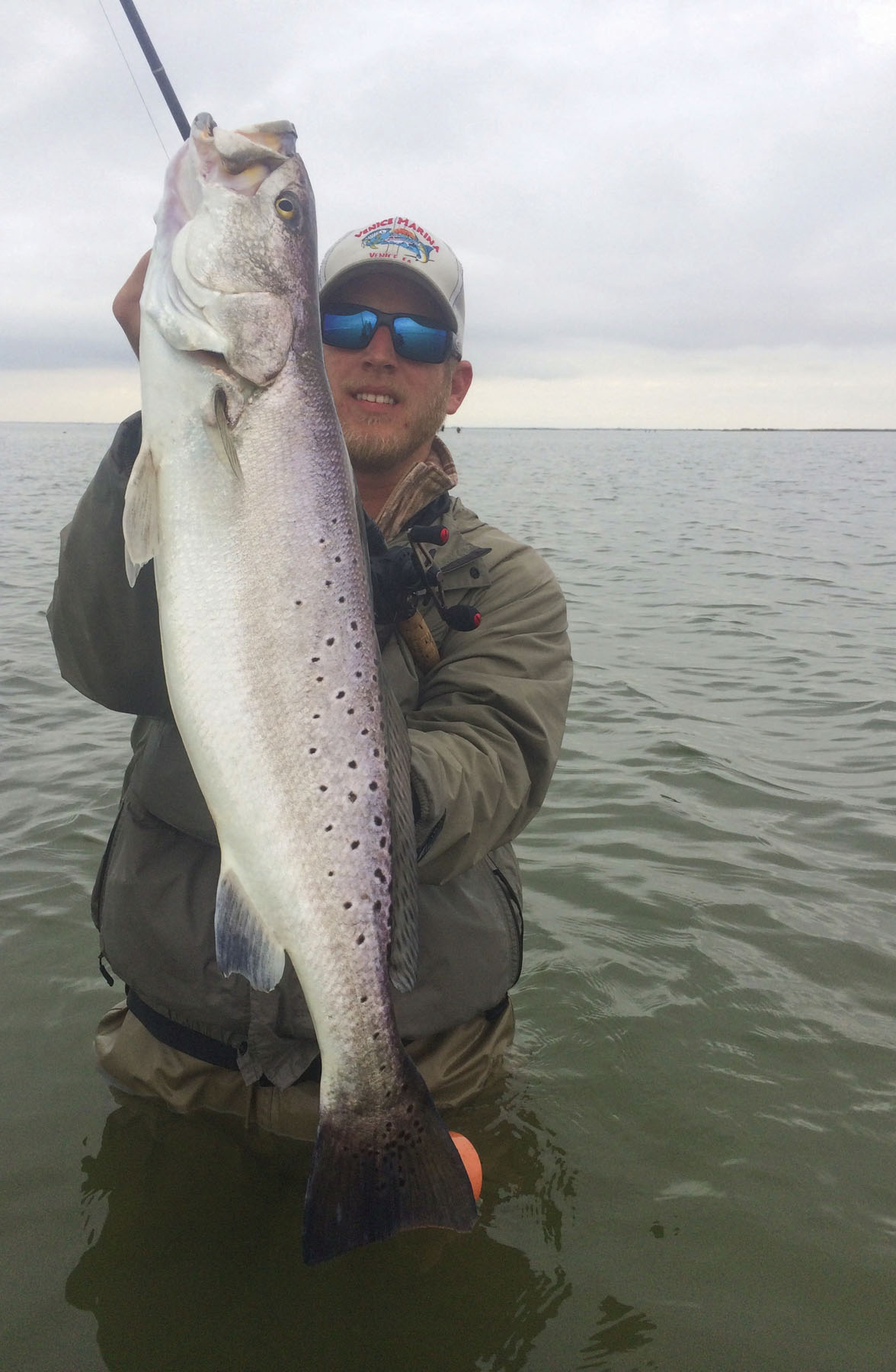 After five years of drought we are experiencing a return to normal and wetter winter weather patterns. With all the local runoff and flow of the Trinity and San Jacinto rivers, the fish have recently been more scattered than normal. And, due to the ground staying saturated, any amount of rain we get just goes straight to the bay. Surely, it doesn't seem like it's going to stop but don't give up hope. March's stronger tides are coming and salinity in the upper regions of the Galveston complex will hopefully recover quickly.

As a whole, trout are numerous over the majority of the bay system. Each day is different though and sometimes harder to keep a consistent pattern. My reasoning on this is that during winter, fish metabolism slows, and they do not have to eat every single day. However, when a feeding school of trout or redfish is located you could be in for an unbelievable session as they may not have fed in a few days.

Big trout have been harder to pattern lately as the back-bay regions they prefer in winter have been hit with so much fresh water. But don't let that fool you, they are still around and still have to eat sooner or later. Wading with MirrOlures and Corkys works great for these situations since they allow you to fish much slower and stay down on the saltier bottom. Redfish have been easier, fresh water doesn't bother them as much. Drifting has been productive while keying on deeper structure.

Drifting for trout in deeper water has been consistent for numbers. While drifting, I like to throw more big bodied suspending twitchbaits such as Tidal Surge Maniac Mullets, MirrOlure 52MRs, and also Corky Devils and the Soft-Dine XL. These lures better represent the mid-sized mullet and large shad the trout are foraging on in the colder months. Having said this, you still cannot beat soft plastics such as the Tidal Surge Split Tail Mullet and MirrOlure Provoker for locating them. Given the range of water and wind conditions of late-winter, finding bait is the primary key to finding trout. A sensitive high-modulus rod is super important to be able to distinguish the softer bites of those colder trout versus nicking a piece of oyster. I love my Waterloo Ultra Mags for these applications.

The Tri-Bay area is holding more fish along deeper drop-offs, ledges and channels rather than the shallow flats and spoils since the freshwater is still lurking on the surface. The deeper you go, the better chance you'll have of breaking through the freshwater blanket and getting to the trout.

West Bay is still producing with a lot of trout on mid-bay reefs and coves throwing plum-chartreuse plastics, Corkys and MirrOlures. The trout are pulling up out of the deeper water and sliding onto the shallower ledges to feed for short periods of time, then sliding back down.

The back of East Bay has been inconsistent but still producing a lot of smaller trout with the occasional bigger bites. Wading the north shoreline in the afternoons with a moderate incoming tide and the south shoreline with an outgoing tide by bayou drains is your best bet. It's always good to key on mud and mixed shell. While wading, if you start walking over some crunchy shell, take note and work that area thoroughly. It doesn't take much structure to keep those big fish around in East Bay.

Upper Galveston bays have been the most consistent across the entire bay complex. You still have to play the tide with the freshwater coming out of the San Jacinto River, but it's definitely more manageable than having to deal with the Trinity River. Upper Galveston bays make such great winter/spring bays because of their significant drop-offs to deeper water. This allows the fish to slip off into the nearby channels at any given moment then slide right back up onto the muddy oyster-filled flats to feed. Wading with Corky Fat Boys and Soft-Dine XLs is always good in these parts.

Trinity Bay is pretty much wiped out, for now, due to the Trinity River inundation. It'll come back, and when it does, it will be amazing. But until then, we just have to fish elsewhere. If catching those high-fin blue cats sounds appealing to you, the Trinity marsh is the place to go. Eventually the water temps will rise, the tides will flush the freshwater, and we will be back to normal. Stay tight.