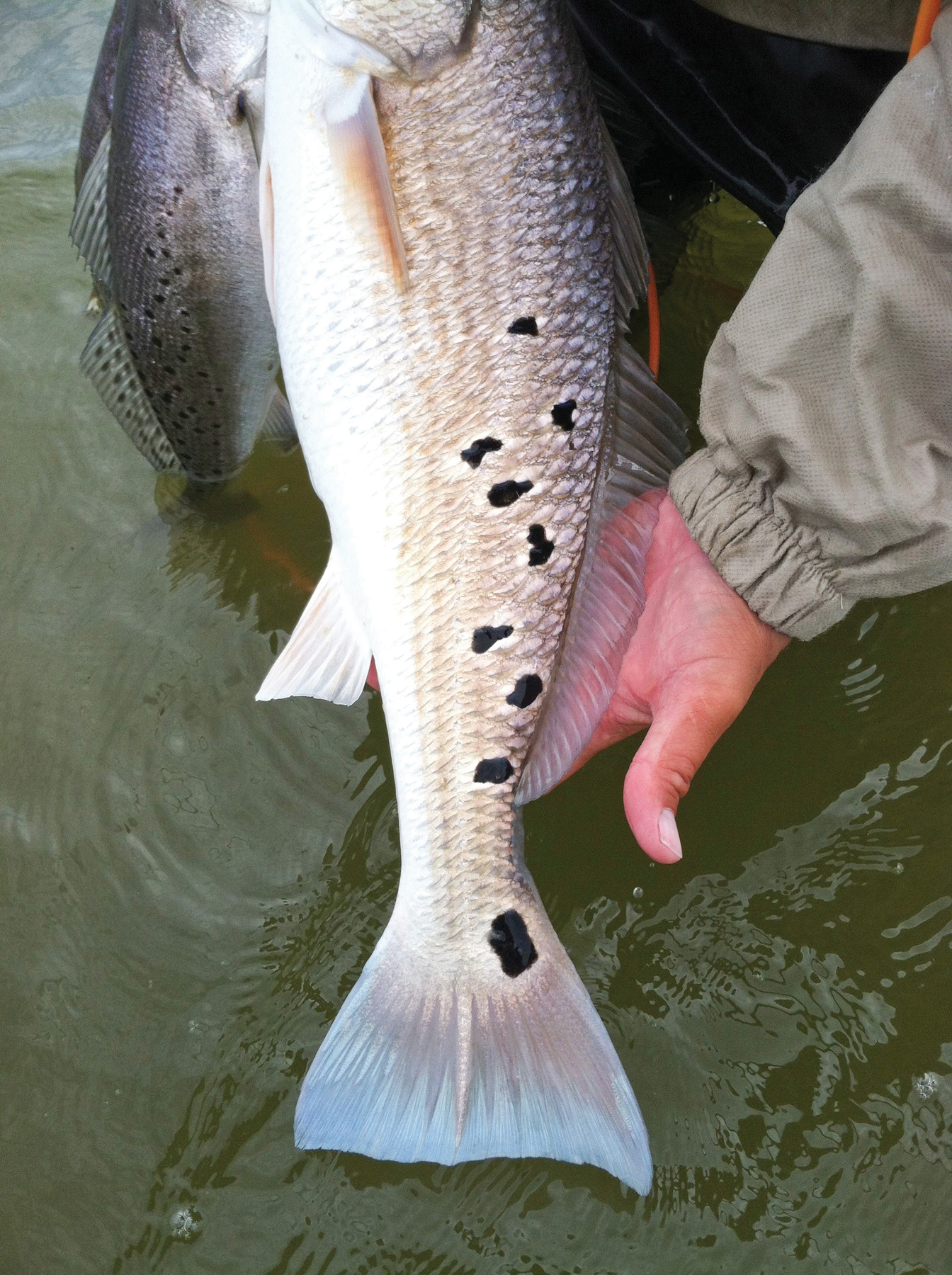 Galveston redfish have been plentiful and fat as footballs.
In my last article I talked about how freshwater was not such a big deal anymore and how abundant our spring catching would be. It seemed like as soon as I submitted that write-up, the heavens opened up and flushed us out again. We had a lot of rain in the northern part of the state so consequently it all came our way. Livingston Dam pumped 58,000 cubic feet per second for about a week and held a consistent 43,800 cubic feet per second outflow for over two and a half weeks. It seemed like it would never stop but it finally has. Floods call for adjustments.

As a kid, I always remembered hearing Mickey Eastman and James Plaag talk about how a flood will separate the boys from the men. Although this flood was very minute to what many of us have seen in years past, it was the biggest influx of freshwater we've seen in the last five years. Although a lot of freshwater inflow can take us for a whirlwind, it has its advantages as well. Once you locate the fish on the edge of the freshwater, you'll be in store for an amazing bite.

Trinity Bay, or shall I say Trinity Lake, is still wiped out. If you come around Smith Point or Houston Point, you'll run into a mud pit of logs, oak leaves, and all kinds of other debris. I don't expect it to get right again for another month, maybe. Although with the right tides and weather, we might get lucky and see some later May action on the well pads and east shoreline.

Upper Galveston has been spotty but still holding a lot of fish. As normal for April, you can still go up there to catch a trophy trout throwing suspending twitch-baits like MirrOlures or topwaters but the fast and furious bites that we've been used to throughout the winter are starting to slow down up there. With that being said, the redfish will pick up. The upper Galveston Bays supply great redfish action in late April and May. The fresh shrimp and shad hatches that are finding their way around in some of the inlets and oyster/mud spoils make for great ambush points for redfish and trout. The upper Galveston Bays can also make for great places to get out of the wind.

East Galveston Bay is shaping up nicely for a great May. There's still a lot of freshwater in the back of the bay, but nothing that we're not already used to. Wading on the south shoreline around bayou drains has been producing solid numbers of redfish throwing Bagley Hammer-Finish Spoons and scented soft plastics such as the new MirrOlure Marsh Minnow. The trout bite has been consistent on the south shoreline flats over sand and scattered shell throwing top-waters and 51MR MirrOlures. The fish are starting to congregate better and feed more aggressively with the warmer days. The transition of fish moving onto the oysters out deep is going on and you can catch a few already but it's not quite right yet. But by May, it will be in full swing! The reef drifting game can be fun and produce plentiful catches but also very populated so always remember to be courteous to your fellow anglers out there.

The West Bay late spring bite in April started off nicely with warm weather and abundant fish. The fish are congregating on the warmer shorelines over grass, oyster and shell. Baitfish have really started to show up in plentiful numbers and the fish are feeding on them good. We are having great action on topwaters in the early mornings and late evenings. Once the action slows on tops, we are catching them on soft plastics like Tidal Surge Split-Tail Mullets in red shad for dirty water and Guano or Plum/Chartreuse in cleaner water. Flounder are moving in, in good numbers, and the guys throwing GULP on jigs are finding great catches of bigger than average fish. There has been a small influx of shrimp, so expect the redfish to be working the shorelines pushing around looking for shrimp. With the deluge of rain in the last few weeks we are already seeing tons of shad and that is going to make May an incredible month.

As a whole, April fishing has been productive despite all the rain and May should be even better. I don't know about y'all, but I am ready for the heat and summertime rush. Be safe out there and stay tight! Capt. Caleb Harp