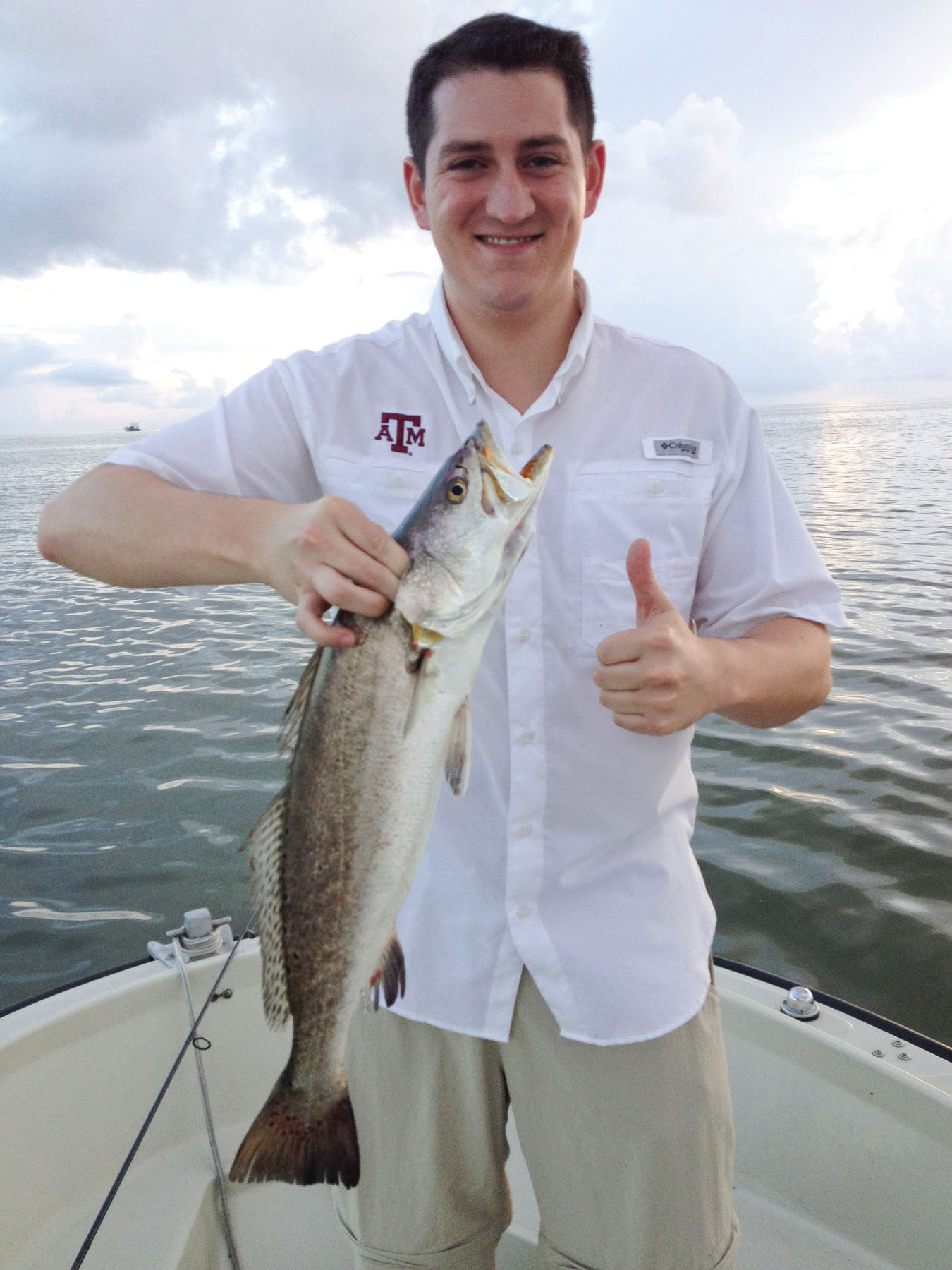 Man, oh man! How can anyone just not fall in love with this time of year? September and October were very good to us with lots of fish caught all across the bay. The topwater bite has been exceptional with the Heddon One Knocker Spook taking center stage on most days. Salt Water Assassins and Tidal Surge Split Tail Mullets rigged on 1/8 ounce and 1/4 ounce jigs have been as reliable as ever while casting to slicks and wells. It's hard to believe it could get any better, but it will!

After holding in a summer-like pattern through the first week of October, we've seen the trout begin to shift into more of a fall pattern. Generous amounts of rainfall have helped lower water temperatures and flush bait out of the marsh. The deeper water-hard shell pattern is giving way to shallower haunts and softer bottoms. It's a fantastic time to wade, but it doesn't necessarily mean that catching trout in 6 to 9 feet depths has come to a halt. However, the productive deeper water locations are changing. The channel bite is waning, but five to eight feet depths toward the backs of the bays and Upper Galveston Bay are beginning to cough up some nice catches. Slicks will make the trout easier to pin down until the colder weather is here to stay. Heavy concentrations of bait and/or bird activity is a great back-up plan when no slicks are present.

With abundant food sources throughout the Galveston Bay Complex trout and redfish will gorge themselves on white shrimp, shad and mullet leading up to winter. Wading around marsh drains will be a safe bet all month. Drifting slicks and active bait in Trinity, East, West and the upper reaches of the bay can pay-off in a big way. Birds have been working and will continue to do so in the above-mentioned bays. It's not hard to find high percentage areas this month. The best advice I can give is to spend time in the northern and eastern stretches of each segment of the bay. From that point forward use your eyes to find fish.

November isn't just a good month for numbers, but it's also one of the better ones for big trout. I like to fish areas between high-traffic areas for larger trout. There are community areas in every bay along the coast. Every bay has them and scores of anglers frequent them. There's always a chance to catch a 28-plus inch trout on a well-known stretch of shoreline or a well-known reef, but with some scouting you can stay away from the crowds and have just as good, if not better, of a chance at catching your personal best. Older female trout tend to seek out areas away from predation and away from pressure. My recommendation to most folks is to spend some time looking at Google Earth. Find secluded guts and unmarked reefs (even if they're small). Spend some time on the water idling down a shoreline lined with shell humps and bayou drains. Too many folks run wide open from point A to point B while missing some pretty good stuff in between. Once you've found an area that gives you that warm and fuzzy feeling, devote some time observing surface activity. Make mental notes of the depth changes and small patches of shell. You may not catch 'em the day you're there, but that wild card will pay off sooner or later.

Employ a stealth mode when entering and leaving an area. One of my biggest pet peeves is to see some Dale Earnhardt wannabe blaze into an area at 90 mph. Trout, particularly the larger ones, probably don't react too well to having a 250 HP outboard running over them especially in shallow water. My suggestion is to shut down the big motor then troll quietly into your fishing area before starting your wade or drift. This sounds like common sense, but I see hotshot speed demons every week running over fish. Common sense isn't so common these days.

November is a great month to spread out and experience different things. Trout and redfishing is great in just about every corner of the bay. Catching flounder also comes into play. Bull reds are ganged up around the jetties. Birds are working. Moving around and fishing different areas of this huge complex keeps things interesting and is fun for the guide too! Besides, I've never been a proponent of wearing out one area. There's a lot to experience this month. Like I said earlier, "How can you not fall in love with it?"