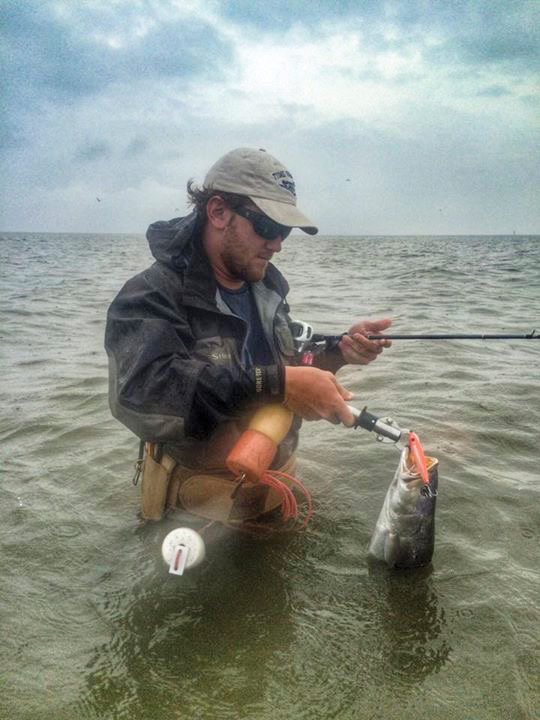 The old tried-and-true 51MR MirrOlure still gets the job done.

It's that time of year again; the long-awaited kickoff to winter wading for trophy trout here on the Galveston bays. November mornings are chilly and fish begin staging shallower by the day. North wind will becoming more prevalent with an occasional blue northern bringing on early-winter conditions. Even whenever it feels like dead of winter, we have to remember that it is still only fall. The winter pattern is a different animal than the late-fall pattern and requires different techniques. It's often hard for anxious anglers to not rush the winter pattern after a few hard fronts. The anticipation of all of the big trout moving to the traditional winter holes at once can really send us on a whirlwind. Here in Galveston we've grown accustomed to fishing in 8-10ft of water since May and this drifting pattern can become somewhat monotonous, even when fishing is good. It is nice to hop out of the boat come winter and walk down some of the bigger trout in our bays but we cannot rush that pattern.

November can actually be the best of both worlds for wade and drift fishing, between fronts, of course. A lot of our fish will move onto the shallow mud flats to seek a warmer bottom for the cooler days. With the amount of fish moving up shallow, it can make for some very exciting fishing throwing topwaters and Corkys in waist deep water. But let us not forget about the great number of fish that are still lingering on the deeper edges of the flats that haven't quite made the move to shallow water. I have experienced phenomenal November days drifting the edges of flats in 4-6ft of water throwing soft plastics to locate the school and then switching over to a bigger-bodied lures for bigger bites – MirrOlure 52MR and Tidal Surge Maniac Mullet.

November fishing reminds me a lot of late February. It's not too cold and it's not too warm, it's just right. We don't really need to be in knee-deep mud and nor do we need to be on rock hard sand. November is best right in the middle. The fish's metabolism is still high enough to readily smoke a topwater throughout the day. Even after substantial cold fronts the fish don't seem to go into lockjaw mode as easily as in the more frigid months of December and January.

We continue to experience great trout catches on the many reefs and shell pads located in the central portions of East Bay. The reef pattern will start to fade away through the end of October once the water temperature stabilizes below 70 and this is when we will start focusing on shorelines and bayou drains. The timing will definitely hinge on the water temperature. Bayou drains on the south shoreline can be exceptionally productive for trout, redfish and even flounder during outgoing tides. While drifting, key on slicks and bait congregated over scattered shell. When wading, key on scattered shell on softer bottom.

West Bay has been steadily producing trout drifting scattered shell in 3-5ft of water with plum and chartreuse soft plastics. One of my favorites is the MirrOlure Provoker. Redfish have been numerous and starting to school in Greens and Karankawa Lakes. Quality trout and redfish continue to hold along grass-sand edges of the north shoreline. November's cooler water temperatures will push more fish toward scattered oyster-mud bottom areas.

Trinity Bay is looking better by the day. Birds are working schooled trout all across the north-end and providing quick limits. When bird chasing becomes too crowded and hectic, the action will be slower but you can find better quality trout over clamshell beds and well pads. These fish will leave the wells in the next few weeks, as fronts become more frequent and water temperature stays below 70for about 10 days or so. When this occurs, drifting clamshell beds on the north end of the bay will consistently produce fish throughout November. Generally, during this time of year, the fish will stay put so once you get on them, mark them and stand on them, they aren't going anywhere unless YOU spook them. Wading flats and mud guts in front of bayou drains will be good depending on freshwater inflows. I don't expect the number of trophy catches up here this year as we had in years past since the spring floods pushed so many of our resident large fish toward East Bay. The "harvest" was unbelievable for several months in East Bay and also along the Ship Channel. We'll just have to wait and see.