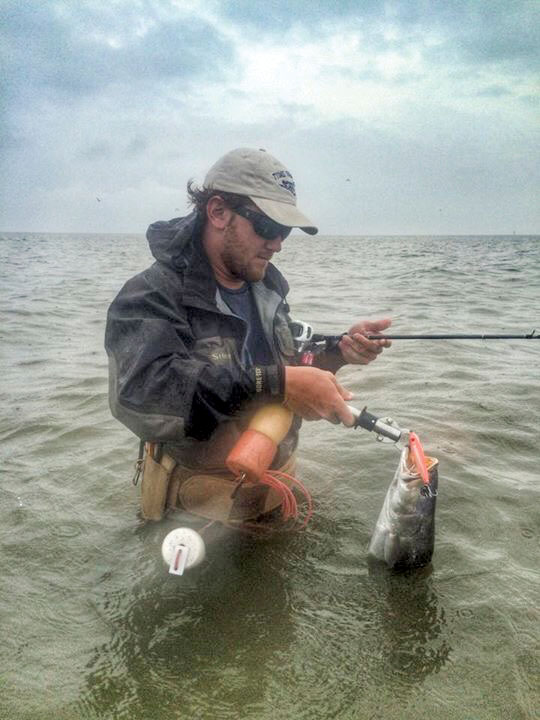 Old-school 51M MirrOlures can be the ticket when they’re feeding near the surface but won’t hit a topwater.

November brings a much awaited weather pattern for big trout enthusiasts. Each cold front will stage fish shallower over mud bottom, setting us up for winter wade-fishing. The anticipation for this is very strong for those of us who have been boat-bound and drift-fishing deep structure since April.

As November approaches, the fronts push bait from marshes and bayou drains where they stage on bay shorelines and this in turn draws the trout to the same areas. Once the water temperature stabilizes in the high-50s to low-60s, the fish will be drawn to the mud where it is warmer. Fishing a north shoreline in the days following a front can be especially productive as the sun will be lower in the sky, shining more directly upon the north shorelines, and causing a warming trend that is often 6- to 8 degrees higher than shorelines on the south side of the bays.

Managing expectations and waiting patiently is the name of the game in November; we must wait for the water temps to drop and the fish migration to develop. They don't move shallow overnight. Drift-fishing can still be very good in certain areas during fall and early-winter, and that will be our Plan B. Sometimes after a hard norther and the tide gets blown out, drifting is the way to go adjacent to a drop-off or ledge. But we also have to deal with the high atmospheric pressure that sets in following most fronts; this always makes for a day or two of tough bite conditions. When you walk outside and don't see a cloud in the sky, the pressure is high and most likely the fish aren't going to be jumping in the boat. Generally speaking though, two days after a front, fishing can really turn on given that they haven't fed since the front arrived.

East Bay has been very tough of late and I have to point a finger at the massive fish harvest that has happened there over the last two summers of fresh water inundation in the upper parts of the Galveston Bay system. There are a few pods of fish hanging around but it's pretty slim pickings. Hopefully after the first few hard fronts we will see some fish moving out of the marshes and coming through Rollover Pass. November is known for excellent wade fishing in the back of East Bay. The Anahuac Wildlife Refuge shoreline all the way to Oyster Bayou has been legendary around Thanksgiving time. My favorite lure choices for this style of fishing are the Corky Fat Boy in bright colors such as a pink-pearl or tequila sunrise. The 51M MirrOlures can be deadly too, when the fish are active and feeding in the upper part of the water column but won't eat a topwater very well. Outgoing tides around bayou drains are usually the best. Drifting mud-shell bottom in 3- to 4-foot depths can also be productive when the fish are staging a little deeper.

Trinity Bay has been steadily improving since the flood but it's not nearly as good as we've seen in years past. I'm fully convinced that the majority of the Trinity trout that fled south to saltier reefs during the floods went home in ice chests and will not be returning. I sincerely hope I am wrong but it is beginning to look like all we have left are some stragglers coming home. Old-timers are likening it to the freeze of '89; we are fishing hard for the survivors of a tragedy. If the numbers should somehow miraculously improve, it could be really good because there are literally tons of bait in the upper end of Trinity Bay. Generally, we plan on fishing in Jack's Pocket and surrounding coves and inlets during the month of November. Redfish have been thick in the back of the bay along grass beds and bayou drains on MirrOlure's Marsh Minnow paddletails.

West Bay, which was least affected by the floods of last spring, has been our best producer through late-summer and early-fall. Luckily the San Luis pass feeds the west-end with fish during the summer months, so it stays pretty stocked up. As the water temperature continues to cool, I'd look to the south shoreline coves and mid-bay reefs such as Confederate and similar areas. If you've got plenty of bait in the area, you've got fish. Throwing rattails rigged on a super light jig can be really good during the fall anytime you are not experiencing decent topwater action. Redfish are still thick in the marshes.