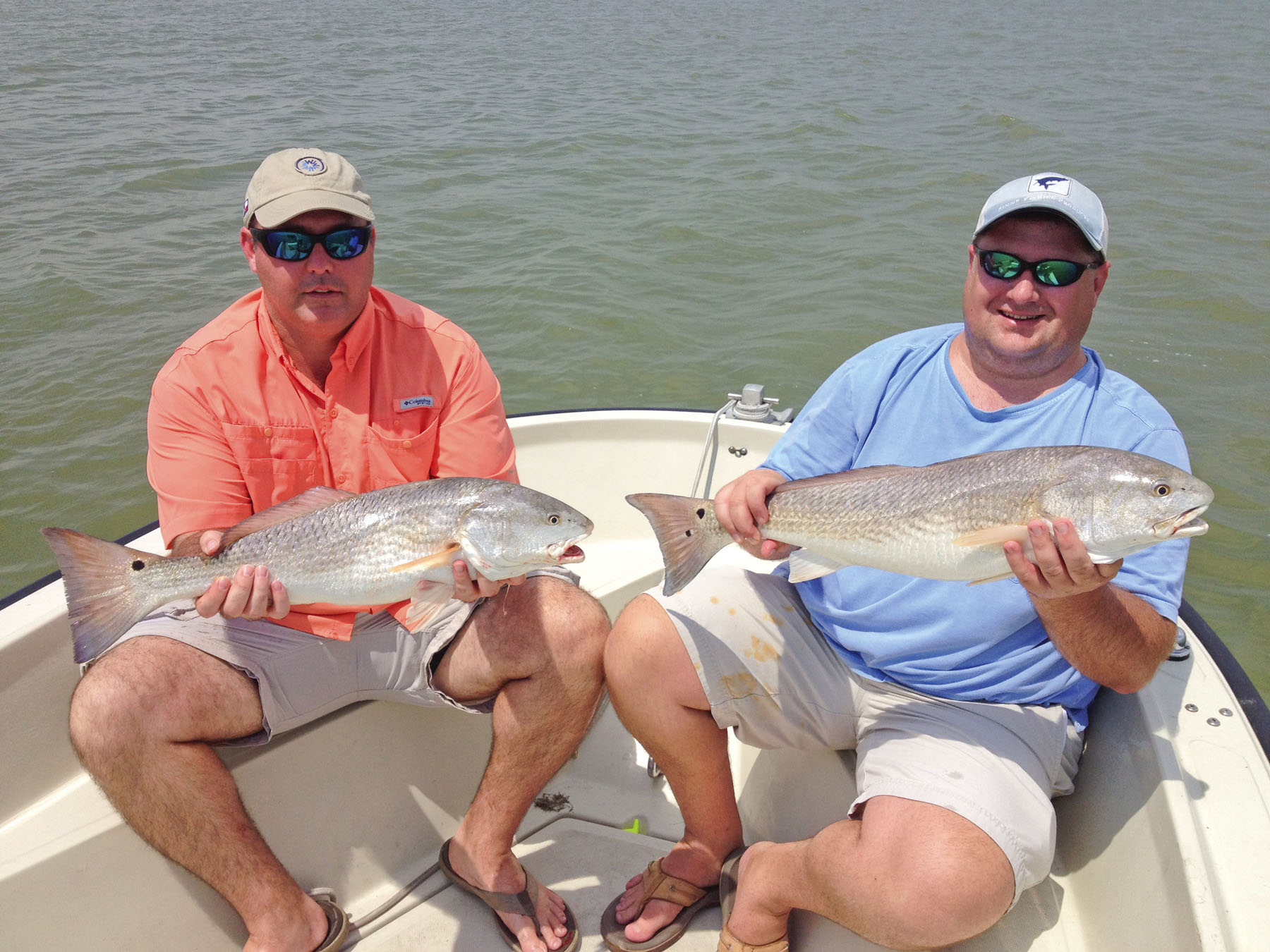 Steve Hughes and Kent Copeland with double hook-ups!
We're still catching good numbers of trout and redfish over deep shell. So, not much has changed over the past month other than an influx of small trout throughout the bay system. There are still plenty of solid trout being caught, but many areas are inundated with little ones too. When I say "little" I'm talking about 8 to 15 inch fish. We drifted a set of slicks the other day and about every other cast yielded a throwback. Crimping (using needle-nosed pliers) the barbs on our jigs enabled us to flip most of them off the hook without ever touching them. I highly recommend doing this especially when working birds. If you can't get on the right part of the school (keepers); it's better to just move on.

The dog days are drawing to a close and cooler early-morning boat rides are a welcome reprieve. Wading a secluded shoreline as the sun rises on a brisk October morning kind of rejuvenates the soul. As cool fronts become more frequent some larger trout will tend to show up along shorelines. This works out well as early fronts typically bring stiff northeast winds which make drifting open water difficult. This is when wading comes into play. We'll be focusing on patches of shell near depth changes. Undulations and bayou drains will be perfect staging areas as currents funnel shad, shrimp and mullet onto adjacent flats. Various topwaters will be the first choice, most days. MirrOlure She Dogs, Heddon Super Spooks (including Juniors and One Knockers) and Rapala Skitterwalks are all great choices. Throw the larger, higher-pitched plugs like the She Dog in choppy conditions and the One Knockers and Junior varieties on calmer days. Salt Water Assassins, MirrOlure Lil' Johns and Tidal Surge Split-Tail Mullets will garner more attention when surface plugs aren't getting it done. A high barometric pressure day following a front would be a good time to throw tails, in most cases.

We're already seeing tons of little whiskers and eyeballs especially towards the back of the bays. There are some keeper trout in them but you have to sift through the throwback trout, ladyfish and gafftop. Towards the end of the month these shrimp will be larger and cool fronts will be stronger resulting in more keeper trout under them. Last year I found that throwing a Tidal Surge Maniac Mullet or a topwater helped weed out the little ones. There should be plenty of mid-bay flocks in Trinity, East and Chocolate Bays from which to choose by mid-October.

Slicks and pods of bait will be prevalent in 4 to 7 foot depths, especially near ridge lines. Oyster and clam reefs will be good for drifting when the wind cooperates. Upper stretches of the bay near Tabbs, Sylvan Beach and San Jacinto River satellite bays will all yield good results as water temperatures drop. Aforementioned soft plastics as well as MirrOlure 51 and 52 Series are good choices when drifting these areas.

Back lake redfish are a blast this time of year as bull tides flood the marshes. There's nothing like seeing a bronzed-back bulldozer of a redfish crush a topwater. Heddon's Super Spook Jr. and Rapala's Baby Skitterwalk are two baits that come to mind. Keep your eyes peeled for wakes and mud boils. Sometimes the water is clear enough to actually see the fish. Cast in front and beyond them or the school may scatter. Then, work your lure out in front of them. Keeping your distance and not casting a shadow is important. Making long accurate casts will increase your chances of a hook-up as well. If your surface offerings aren't doing the trick then a 4 inch Salt Water Assassin Sea Shad is tough to beat. Speaking of making long casts; having the right reel for the job is a must. I personally use Shimano's Chronarch 50e or Core 50Mg with just one brake set. Keeping your reels cleaned and conditioned is a must.

There's a lot to be excited about during the month of October. With more options than probably any other month it's obvious why this is my favorite month here on Galveston Bay. Weekdays won't be so crowded but weekends can be like a Wal-Mart parking lot. Please just remember that there's a lot of water out there. Use what you know and be courteous. There is great pride to be had in fishing with your eyes and finding your own fish. Don't be the dog that licks the bowl.