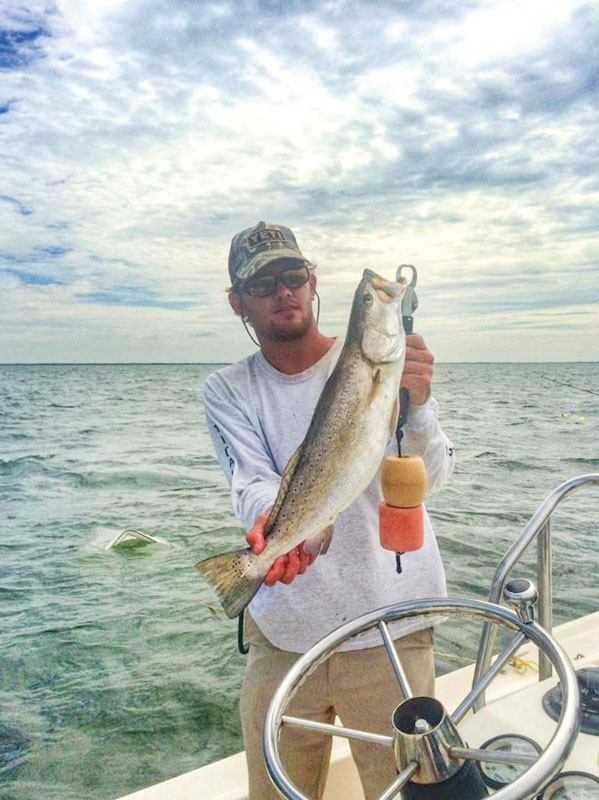 October can be truly phenomenal on Galveston bays. Air temperatures are down requiring light jackets for morning boat rides and we encounter daily the blood-pumping October sight of acres of seagulls going nuts over migrating shrimp and hungry trout. Redfish by the 30s and 40s cruise shallow flats eating anything they can and trout blowup ferociously on Top Dogs on brisk sunrises. I look forward to October all year.

As for now, September fishing is great! Most of the bay complex is back to normal after that horrendous spring flood. Beautiful trout-green water fills most every part of the bay complex with light wind throughout the day and great tide movement. Rivers are running normal flows and with strong daily incoming tide and warm water temperatures, the bait is migrating further and further north and you guessed it the trout and redfish are following.

Without trying to sound too obvious, the name of the game right now is to find a feeding school of fish. One school might be going off while another is at a lull. You have to bump around until you locate ones that want to eat. Do not resort to using bait for instant gratification, there is a school somewhere nearby that will take lures, it just takes a little work. Mix it up. September is full of transitions and there are plenty of scenarios going on. We have fish holding on reefs, clam beds and other types of structure, and we also have open-water schools of trout and redfish following mullet and shadthese we find by locating mud boils and lines of slickshovering gulls are a dead giveaway and usually means they are feeding on shrimp. Just keep on grindin'!

East Galveston Bay continues to produce great catches of trout and redfish and has become substantially less-crowded than early and mid-summer as water quality improves in the Trinity and Upper-Galveston region. Trout action is consistent on oyster reefs throwing chartreuse-ice MirrOlure Lil Johns. Redfish have become easier to pattern; large schools can be found under slicks but, do not crowd them! The best way to get in on this action is definitely by drifting and riding the trolling motor. With October approaching, flocks of feeding gulls will be numerous toward the back of the bay and in front of marsh sloughs. Once we get into the "real" October cycle, the fish will transition to more mud-shell mixed bottom vs. solid oyster reefs in the middle of the bay. Drifting shallower reefs will produce great catches of trout as well as wading around bayou drains and mud-shell flats with Paul Brown Corkys.

West Bay has been running pretty much the same late-summer pattern as East Bay. Wading shallow sand flats is producing solid trout on big topwaters; drifting mid-bay reefs with soft plastics has also been steady. Redfish have been plentiful on grass flats on the north shoreline using Bagley spoons or a paddletail such as the Marsh Minnow by MirrOlure rigged on a 1/16 jig-head. October's pattern should transition the fish more toward muddy bottoms in West Bay. Be on the lookout for bird activity as each cool front will draw more and more shrimp out of the marsh.

It's great to finally write about my own backyard again. Trinity is back and it's been good so far; I look for it to get even better in October! On a normal year we know where to look for resident trout on deep structure and we also understand the patterns of migrants coming up the Ship Channel and the way they join with resident stocks. This year has been very different though, it seems they all showed up at once, moving steadily north as the salinity recovered.

Fishing over well pads and isolated clamshell beds has been the predominant pattern during Trinity's recovery. You must use a trolling motor to experience the best these structure types can offer. Our best catches have been made on blue moon Lil Johns, and chartreuse gold Provokers on all sizes of jig-heads for different conditions. The 1/8 ounce for when the fish want to feed near the top of the water column, 1/4 ounce whenever they are suspended at about 4- to 5 feet and 3/8 when the bite is on the bottom. We should see more fish near the head of the bay as October rolls along. Judging by the number of shrimp already in the bay, October's bird action should be one for the books. Be as courteous as possible while fishing the birds, it can get hectic out there.

Be safe out there and tight lines. Capt. Caleb Harp