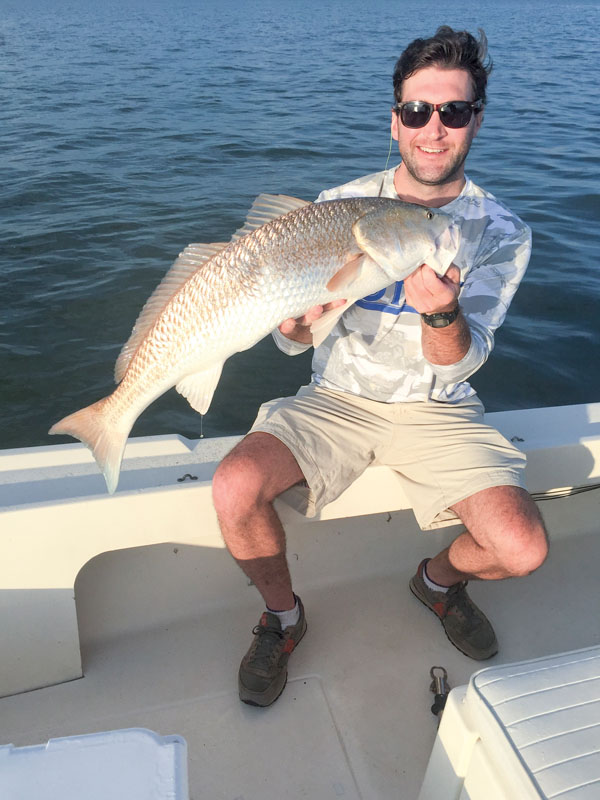 Peter Alonso with a rather rare zero spot redfish.

There's not a better month, in my opinion, than October. As the first few cold snaps start to configure our transition, and by the time we stabilize into a true October pattern, everything will fall into place. October is such a relief from the brutal heat that we're so exhausted of. You can't beat rolling out of the marina with a light jacket on in the mornings. Flocks of birds working over airborne white shrimp and redfish stacked on the flats with tails up are all great parts of October. Drift fishing is good and so is wade fishing. October can be the best of both worlds.

West Galveston Bay has had the upper hand lately and I think that's been due to the lack of pressure. Great mixed catches of trout and redfish are coming from the flats and sandbars around San Luis Pass and Bird Island. The north shoreline grass has been hot as well for throwing topwaters early and then switching to a big paddletail like a MirrOlure Marsh Minnow rigged on a light jighead in the potholes. The fish use these sand pockets in the grass as ambush points so thoroughly working a paddletail through the pockets will normally result in at least a reaction strike when all else fails. This pattern should stay true through October until the water temperature gets below 75 degrees and stays there. Flounder should begin moving out of bayou drains and marshes, stacking up on ledges adjacent to shallow water. Redfish will be thick in the marsh and should start schooling up in tight groups, tailing from time to time.

East Galveston Bay has been off and on lately. One day they bite good and the next day, you can't buy a bite. But there will be slicks so you know they're there, just no cooperation. This is due to the transition of stunted water temperature. Once October rolls around I'd expect to see a more normal pattern emerge. Look for birds in the back of the bay as the first groups of white shrimp will start to flood out of the marsh drains during this time of year. The deep reefs will still be good in October if there are any fish left after the two-year massacre that we just went through on those spots. Wade fishing should potentially get better throughout the month of October on the shorelines throwing Corky's and MirrOlures. Make sure to wear your mosquito spray!

I wouldn't expect a banner fall season in the back of Trinity this year. I'm almost certain that the biomass of fish from Trinity that skedaddled from the flood were unable to make the trip home when the salinity finally started to come back. We simply just don't have that many fish in Trinity Bay and they magically aren't all going to swim up here any time soon. It takes trout awhile to push back up. Once October comes and the birds start to work above shrimp we will see how many trout are here. Redfish are plentiful on the shorelines along with an occasional flounder. Better days are coming!