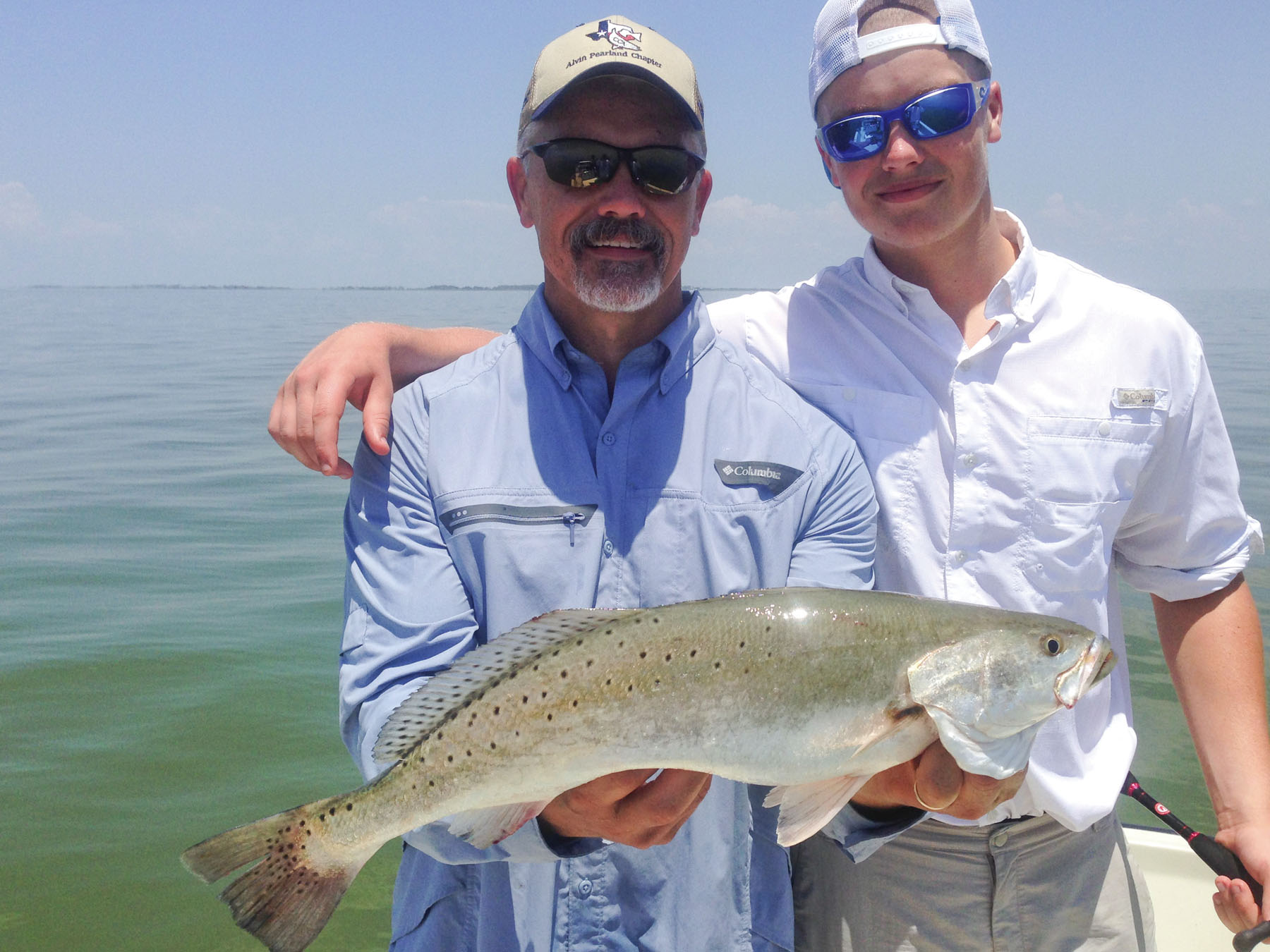 Jeff Sadler and son Easton having a great day before Easton heads off to the Navy.
Stiff winds finally subsided in early August and everyone was able to spread out and catch fish. Occasional showers have kept the water temperatures a little cooler than normal and I think that has really helped the bite. We even had a little cool front that dropped early morning air temperatures into the low-70s. The worm bite is good as it always is this time of year and the topwater action is outstanding at times, even out in deeper water. It's nice to finally be able to follow a more predictable trout pattern. A slow day right now consists of catching fourteen or fifteen keeper trout and a few reds which is still plenty in my book. In my opinion a fishing trip should be about the whole experience, not just numbers. After all, we're not grocery shopping. If everyone has a good time and hopefully learns a thing or two then that's a successful day on the water.

The abundance of forage throughout the entire complex continues to impress, especially shad. As a result, the trout are extremely healthy with most females chock-full of roe. The overall size of the trout is just as impressive with scores of 2- to 3 pounders and above average number of 5- to 7s. On the other end of the spectrum, many 9- to 14 inch trout are being caught. I'm still not convinced that we have more trout bay-wide than we had last year, but it seems pretty good. Furthermore, the overall health of the bay appears to be in great shape.

We seem to be in a similar wind pattern for the past several summers; a westerly breeze early then slick as glass by late morning. In the afternoons the wind switches to due south or, on rare occasions, southeast. The most reliable strategy for us has been drifting deep reefs and spoils along the ship channel and working a few reefs west of the channel until the conditions allow the water to clear in other areas. Once that happens you can pretty much go wherever you want. Trout are being caught from the upper reaches of the bay down to Lower Galveston Bay and over into West Bay. East Bay and Trinity have been consistent as well. The jetty fishermen are doing very well free-lining live shrimp. Our best baits have been Salt Water Assassins, MirrOlure Lil Johns, Heddon One Knocker Spooks and Rapala Skitterwalks.

Working slicks in 7- to 10 feet of water will continue to be productive for early September. Quite a few schools of trout are holding on the transition from shell to mud. Sometimes they'll pull out 100 yards or more from the shell. Just follow the slicks. If it's too calm to see slicks, just put the boat back on the trailer. Seriously though, when it's too slick, trolling to active bait where you've been having success usually works. Many times you can smell the trout even though you can't see them. Having good trolling motor batteries on those kinds of days is essential. I recently switched to a lithium-ion battery and on-board DC charger that charges my trolling battery while the outboard is running. It has been a dream come true under the circumstances mentioned and also for on-the-run open-water redfish schools. A huge thanks goes out to Breakwater Marine for hooking me up with my Stealth One charger and battery. I now have one 36 volt battery that weighs 28.8 pounds and never runs low. It replaced three batteries that had combined weight of 150 pounds.

The second half of September will be influenced by early cold fronts. If fronts are somewhat frequent and cause water temperatures to fluctuate, we could experience a bit of a transition. We saw this last year. Transitional fishing requires more moving around, but it actually presses you to mix things up a little. You may catch a few good trout on a shoreline reef on topwaters then drift slicks in 8 feet of water throwing tails. There are usually a few groups of gulls working as well.

It's been a fun summer. Now it's time to get ready for dove and teal season, football and a little taste of fall fishing. My hat's off to all the parents that took time to get their kids on the water this summer. I saw lots of memories being made and tons of big smiles.