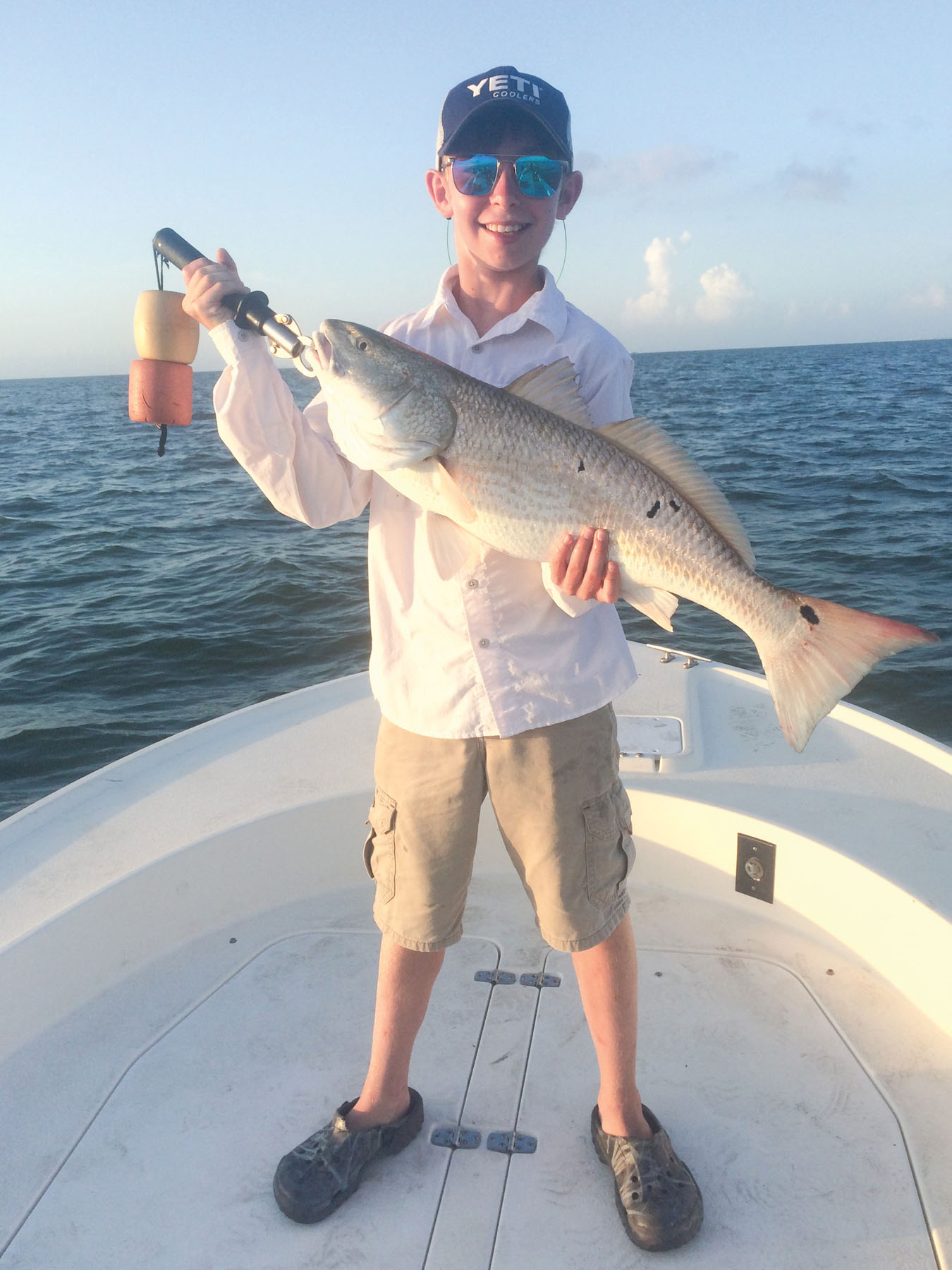 Ricky with a multi-spot red caught from an open-water school.
Finally – the Galveston Bay complex is beginning to recover from the floods. With greener water in areas that have been chocolate brown since April the fish are beginning to spread out and so too are the throngs of anglers. For several months we have been crowding into the few areas that remained productive and days on the bay are definitely becoming much more enjoyable. As a whole the fishing here has been great, tricky at times, but still pretty solid in the grand scheme of things.

Not all of the freshwater is gone nor am I going to bring bad juju on us by saying it has stopped for good; Goodness knows we could very well get slammed by another series of storms and end up right back at square one. BUT, we are rebuilding quite nicely and in a pretty quick fashion. Each bay was affected by freshwater inundation at one point this spring and summer, some more than others. The main source of freshwater, the Trinity River, is down to only 5,000 cubic feet per second as I write this. Now the tide has more control and each incoming current we get mixes the freshwater up more and more, allowing salt to take over in areas we haven't been able to fish in months.

East Galveston Bay remains great and what's even better is that a large number of fishermen have shifted focus to other areas. Six weeks ago it was normal to see forty-plus boats on each reef, sometimes more. While the fishing was amazing due to a huge number of trout migrating toward East Bay as they exited freshed-out Trinity, East Bay always holds a great number of "resident" fish of her own. With surface water temps hitting 90 the deeper reefs that cover much of the bay floor are currently the way to go for trout.

A vital key to fishing these reefs is finding where the fish are holding on them, whether it be on the outside edge, in a trough-gut, or cruising-suspended chasing bait. A great lure for locating fish on reefs is the MirrOlure Lil John soft plastic. Its unique shape produces very realistic darting and can be fished in any portion of the water column by varying jig weight and speed. Typically, if the fish are suspended, I like throwing a paddletail such as MirrOlure's Marsh Minnow on a 1/4 oz BAAD Marine Knotty Hooker jighead. Counting it down and adjusting retrieve makes it easy to stay within the strike zone.

Redfish are still hanging around marsh ponds and can be caught easily on Bagley weedless spoons slow-rolled across their territory. Flounder have been steady around bayou drains on the south shoreline and can be caught bumping GULP along the bottom.

West Galveston Bay has been consistent with decent catches of trout, wading sand-shell bottom with topwaters in bone-chrome-bone and 51MR MirrOlures early in the day. Once the sun comes up it's always good to bounce a paddletail on a 1/16 ounce jig through sand pockets amid the grass for mixed bags of bigger trout and redfish.

Upper Galveston Bay/Ship Channel has been exploding lately with the new salt water arriving with each tide. Reefs and spoils off the Ship Channel are holding a lot of trout and some redfish. These areas are common for live-baiters and while that works for sure, do not be misled into believing you cannot get them on lures. The old 3/8 "gumball" jigheads with Tidal Surge Split Tail Mullet or MirrOlure Provokers worked just off the bottom and will produce plenty of solid trout this time of year.

Trinity Bay has begun to recover but it's going be a while before it's right again. I am guessing that maybe by mid-September we might be fishing the wells and east shoreline again. Those Trinity Bay gas wells can be absolute dynamite when fished correctly. Remember to always work your lure with the current and you can't go wrong with Capt. Mickey's favorite "Purple Demon" Lil John. Just throw it and you'll see why we're such believers. Large paddletails on 3/8 ounce jigs are also great at the wells, the big jighead makes it run deep while a fairly quick retrieve keeps the tail flapping.

Mid-bay redfish action should be good during September. Keep watch for mud streaks and slicks in deep water over balls of shad and menhaden.

As good as it has been, I believe we are going to see even better fishing in the coming month. As Blaien Friermood says, "Better days are coming."