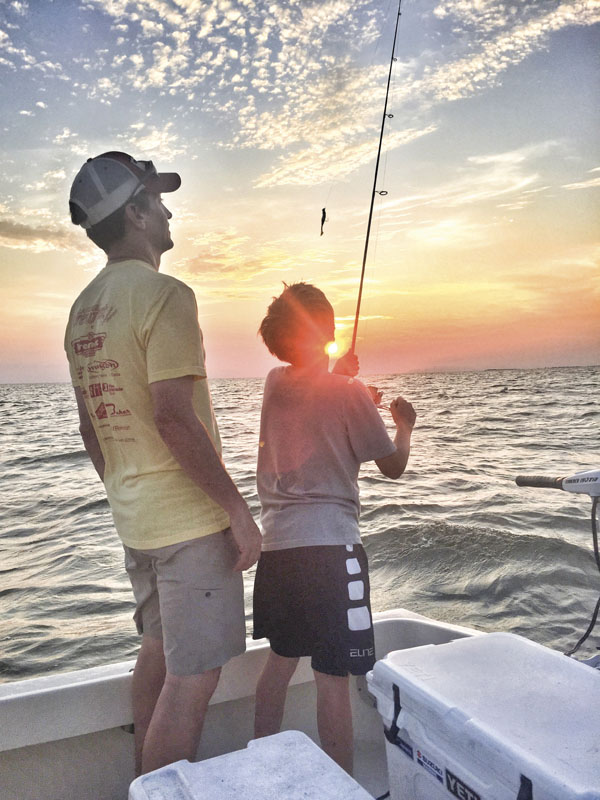 September brings coastal anglers a well-deserved break from August's excruciating heat, even if just a little. September also brings other sporting opportunities and I am excited to be sitting in a teal blind along a rice field levee. While the first weeks might not be all that much different than August, other than teal season and an occasional light north breeze, it sets the stage for a transition that will begin to emerge in our fishery. Mention transition and most fishermen think instantly of spring but this one can be equally significant in the ways it rearranges staging and feeding patterns. Long about mid-to-late month the change should become noticeable.

Water temperatures have been pushing into the 90s and will continue into the first days of the month. Fishing deep water is the key when it's this hot. We've been bouncing bottom with plastics on 3/8 ounce jigs and then finding our trout suspended at five feet the next day, with the same baits on 1/8 ounce heads. You have to keep your head on a swivel and patiently decipher the pattern of each school.

The alternative is buying a bucket of croakers and anchoring on the Houston Ship Channel, Corps of Engineers rock piles just off the channel, Redfish Island or Todd's Dump and put a big box of fish together. But I do not see this as angling or especially sporting. I fear that we could see a decline later this fall in the numbers and quality of trout in the back of Trinity Bay because of the numbers taken from these places through the summer months. Fresh water stack-ups can be fun, no doubt until you sit back a few months later and realize that you've already caught them all.

Freshwater is almost all gone other than the upper region of Trinity Bay. The Trinity River is almost at a complete standstill now. Most of the bay complex is beautiful and emerald green again! I never thought the day would come, three to four months ago, when it was fresh water brown everywhere.

Trinity is finally making a rebound. The gas wells and shell pads in the middle of the bay are holding decent numbers of keeper trout but nothing big. Let's hope the big ones haven't already gone for a ride in an ice chest. Fishing the wells in the middle of Trinity Bay can be all about bouncing around. Sharks are abundant with the elevated water temps. Rolling up to a well and catching a hand full of trout right away, only to have bite shut down instantly, could be a sign that sharks have moved in. Fish struggling on the line and thrashing on the surface are like a dinner bell to predators further up the food chain. To stay on steady action we frequently have to hop to the next well and start over with another school the sharks have not spooked recently. MirrOlure Marsh Minnows in Blue Moon on 3/8 ounce jigs and the MirrOlure Lil' John on 1/4 ounce are my most consistent baits out there. I expect to see a big improvement in Trinity Bay by the beginning of September and continuing throughout the month. Once the first light northers begin to arrive the fish should begin to congregate at the top of the bay and around the river mouth.

I'm certain that East Bay still has some fish but the unreal crowds during the early and mid-summer stack-ups on the reefs cleaned out tons of them. I hate to sound all doom and gloom but you simply cannot deny what was going on out there. Places that were yielding a dozen or so before the fresh water stack-up turned into forty by 8:00AM during the peak of it. Now you're lucky to catch more than three or four. The crowds aren't as badprobably because the fishing is so much slower. September tides and weather will hopefully change things. Open water redfish schools can be found feeding on pogies and ribbonfish in the middle of the bay and will take big spoons and plastics on heavy jigs.

West Bay has grown generally inconsistent for lure guys although decent trout catches continue to come from the San Luis Pass area on loud topwaters such as She Dogs when the currents are strong. Redfish remain pretty thick on north shoreline grass beds and also in the marshes. September's cooler weather and stronger tides should spark trout action on mid-bay reefs.

Stay safe out there... Caleb Harp