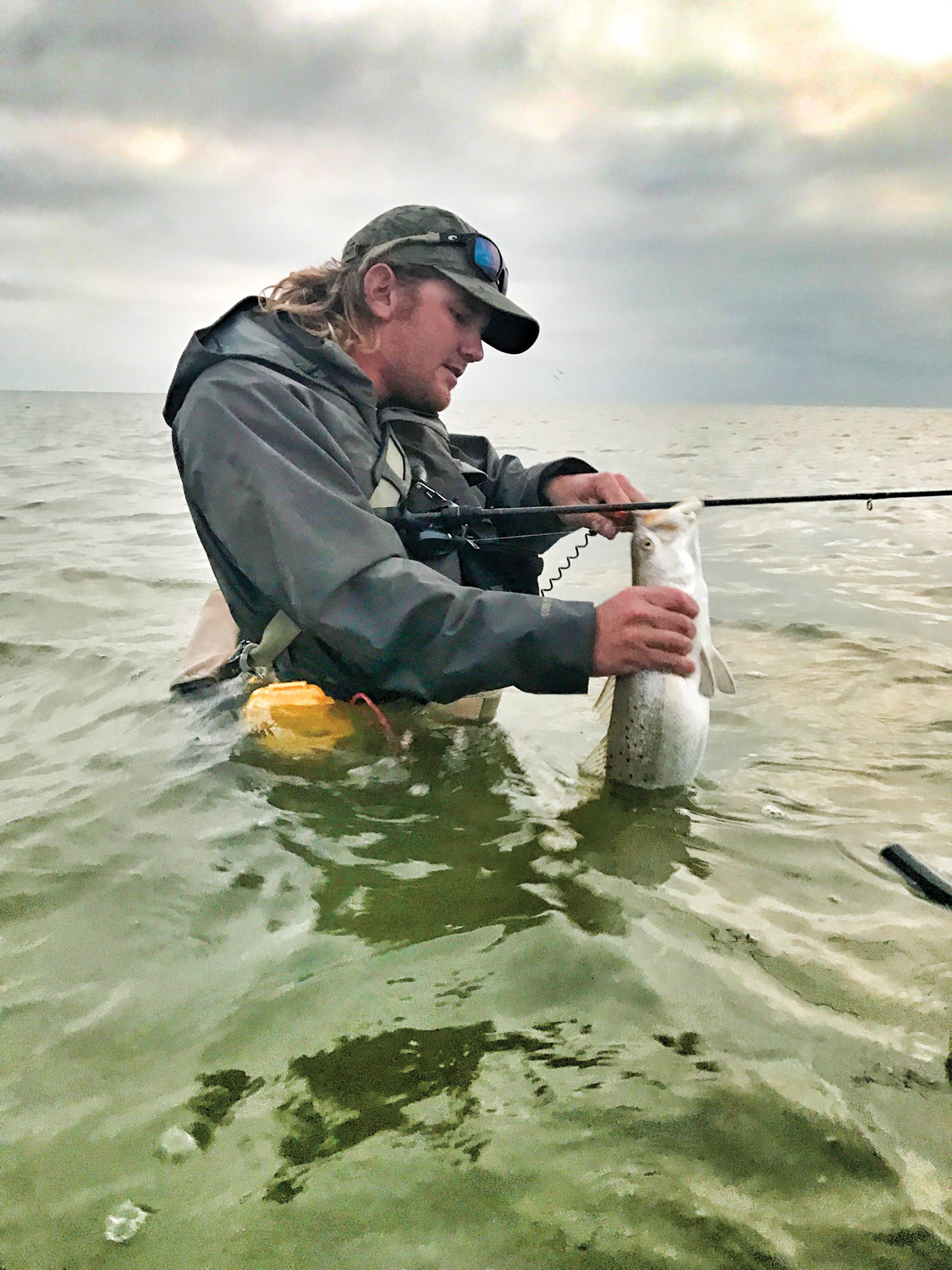 Wade fishing shorelines in April can be as good as it gets in the Galveston bay system.

Working our way through the spring transition is what April fishing is all about. March can be so frustrating. The fish haven’t been eating very predictably, and when they do, they may not feed for long. On warmer days, we’ve seen slick after slick running from a point or shell pad structure but bites were hard to come by. They’re there, for sure, and feeding. But getting them to eat a lure hasn’t always been easy. The closer we get to April, the more energetic and reliable the bite will become. This comes as the result of rising water temperatures and diminished wind that will allow us to target prime structure and shorelines.

Winds have been inconsistent, pretty much the norm this time of year. The “washing machine effect” of sustained southerly flows followed by equally strong west, north east, back to east, then south again can make things challenging for finding fish in water of fishable clarity. The water doesn’t have to be gorgeous to catch fish. Actually, I’m not much a fan of clear water. Water that’s emerald green, like in the Bahamas, is pretty to look at but you’ll need some color streaks or a bit of turbidity to put them in a comfortable feeding mode and willing to take a lure.

Never get discouraged by dirty water. The last two years, with the floods coming into the bays and the fresh water stack-ups, we did very well when the trim tabs were barely visible. In dirty water conditions, I like to throw a lure with a distinct break in the color scheme, for example; Texas Roach with a chartreuse tail, Morning Glory with a chartreuse tail, or a Plum with white tail. I believe fish can see the break between two bold colors better than one solid color.

April brings the first spawning activity of the year and fish seem to be unusually willing to feed aggressively, as though Mother Nature tells them to feed-up in preparation. And before the spawning becomes protracted, the extra weight of all those eggs they’re carrying affords the chance to land some true heavyweight specks. Old timers like to say spawning trout are like pregnant women – moody and downright mean at times, but always ready to eat. Throwing a big topwater during spawning periods is known for producing some exceptional specimens.

West Bay fish are in late-spring pattern already with the warmer than normal water temperatures. Fishing hard sand flats with a lot of shell has been the most productive. Wade fishermen have had good success throwing topwaters whenever there are plenty signs of mullet activity. Rat-tail soft plastics like the MirrOlure Provoker on Bass Assassin Pro Elite 1/16-ounce jigheads have also been steady producers. Redfish have been abundant over thick shell adjacent to deep water and over shallow grass flats on warmer days. As the water temperature rises in April, expect better catches to come from the San Luis Pass area, especially during strong tide exchanges.

East Bay has been inconsistent in general but trout remain plentiful around marsh drains. If timed right, you can have a memorable catch around these drains on outgoing tides throwing small soft plastics, but the heavy ones we expect have been relatively few. Redfish are thick in back lakes and in areas with soft mud-shell bottoms toward the back of the bay. As April approaches, sandier flats will heat up for wade fisherman and become more consistent with topwaters. Don’t be afraid to stop off on a slick or two out deep, over the numerous oyster reefs that comprise the bay floor of so many areas. Late-April can be fantastic drift fishing over these reefs with MirrOlure Lil Johns on 1/8-ounce jigs.

Trinity Bay isn’t what it once was, prior to the massive flooding the past two summers, but there are still fish to be caught. The top end of the bay is currently rather fresh from local rains. I wouldn’t expect too much of a change, anticipating the arrival of April’s famous showers. Let’s just keep our fingers crossed that we don’t pop another raging flood this year. I don’t think we can afford it. The east shoreline can become suddenly productive anytime a sustained east wind comes along and cleans it up. I wouldn’t bank too much on seeing the consistency of the pre-flood years until conditions stabilize, maybe during May. The incredible harvest of speckled trout during the stack-ups the floods created will require a few years to overcome – my opinion. It’ll bounce back, but it’s going to take a while.