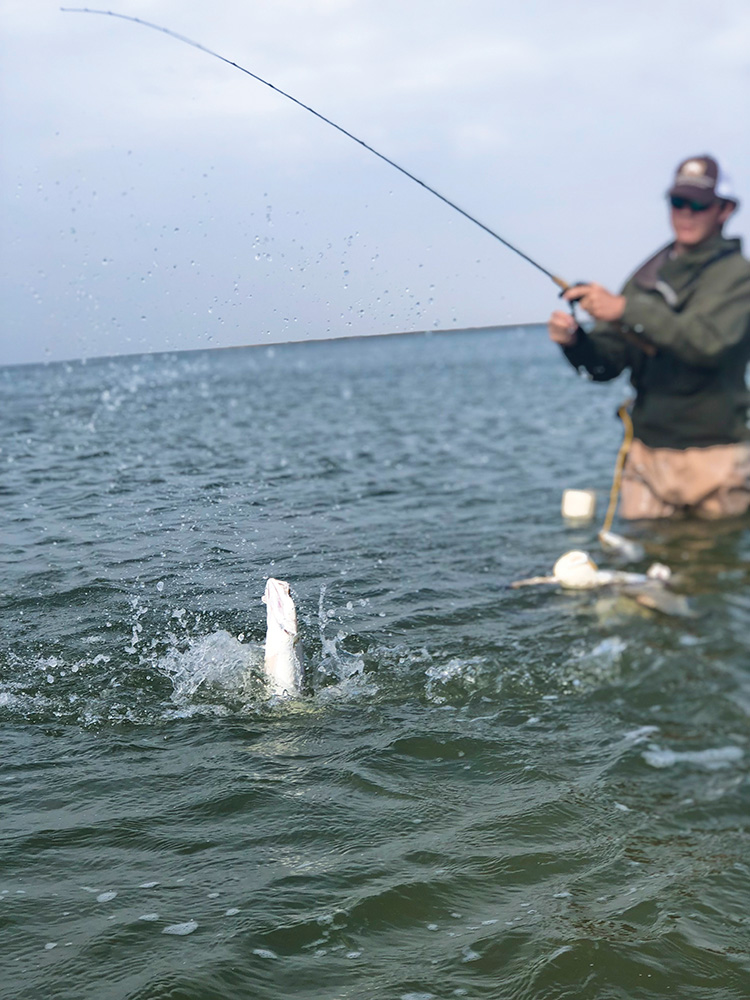 April can be a sign of relief for us as we overcome the dreaded spring transition and frustrating feeding times. March can be a fabulous time to wade fish for trout in the Galveston Bay complex but it is often a very difficult month for us. The glass minnow hatch, inconsistent weather patterns, fish moving around a lot, and light feeding patterns make March a challenge for fishermen. Approaching April, things will become a little easier for us and we will be able to see more fish activity.

Although the wind and weather may not cooperate exactly how we would like, the feeding pattern will become much more predictable during the month of April. Traditionally, April comes with rain and hard southerly blows. Wade fishing on protected shorelines is generally going to your best bet whenever the wind is blowing. As the water temperature warms, drifting will become a more consistent option when the wind allows.

Fishing tight to a shoreline is a great game plan this time of year to target a trophy fish. April is typically when the trout begin to spawn and the first event is quite often the largest of all the spawning that follows through spring and into summer. Excited male trout will roll into a flat first and start to drum. Drumming is their mating call for females and this is the croaking sound they make when you lift them from the water. Once the females arrive and the time gets right they begin to release eggs.

Trout do not bed like bass and there is no effort to guard eggs or parent larvae and fry. This disproves the theory that trout eat croaker because croaker try to eat eggs and baby trout.

Typically, around the full moon in April is when spawning will occur. Favored spawning areas are over sandy bottoms with some amount of grass, near a marsh drain or bayou with lots of current. On an incoming tide, she will dump her eggs and the males will fertilize them as they drift on the current, deep into the grassy safety of the estuary.

Trout feed aggressively when spawning and it is believed a large mullet in the belly of a female helps push the eggs out while she is digesting it. Given that spawning trout are known to gorge on mullet, it would be a good idea to throw a big topwater plug. Chances are that an egg-laden sow will take a swipe at it.

Redfish will become more active in marshes and around the shorelines as their metabolism increases with the water temperature. Forage species will become more available, which seems to trigger them to feed throughout the day. A popping cork or Mauler style float combined with a GULP, spinner bait, or gold spoon is always hard to beat whenever targeting redfish in the marsh. The jetties and rocks along the channels will also come to life during this time. Most all of the early spring redfish tournaments will be won at the Sabine or Galveston jetties. A good jetty tactic is to jig a Texas-rigged GULP shrimp in the washouts or throwing a deep-diving crankbait down the ledges or around the rock piles.

East Bay is normally always a good area to work in April. Wade fishing the south shoreline can be great whenever the wind is really stiff. The famous oyster reefs in East Bay will to begin to attract schools of trout during April as well. Your reefs closer to the south shoreline such as Pepper Grove Reef and the Elm Reefs will turn on first and they will allow you to fish with a little more forgiveness from the wind.

West Bay can still be good for wade fishermen around the south shoreline and towards the San Luis pass. Redfish will become thick in most corners of that bay complex. North shoreline grass and sand pockets will be more and more consistent, too. Just be careful of all the stingrays. Using a MirrOlure Provoker rigged on a very light jighead can be dynamite for West Bay trout and reds during April any time the topwater bite dies off.

Trinity Bay is a still a little fresh right now from the runoff coming out of the river. Should we continue to receive mostly easterly wind and we do not get too much rain, we could see a rebound of wade fishing action along the east shoreline and some slicking action around Smith Point.