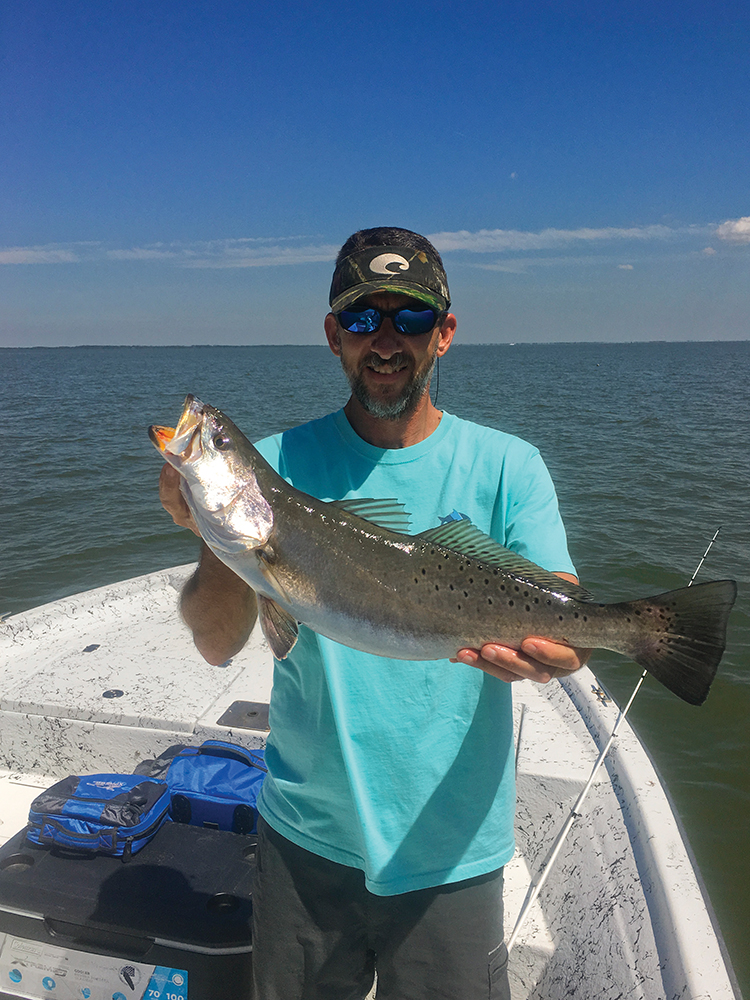 Bryan Jones shows off a nice early spring speck. Drift fishing can be productive when you catch some calm weather.

As we emerge from the spring transition pattern, the month of April brings hope for new stability in our quest to keep up with the bite. Indeed, there are few gimmes in March. The fish don’t eat all day, nor do they HAVE to eat every day. On warmer days we’ve seen slick after slick pouring off points or shell pads but with no bites. They’re there alright, just not willing to eat what we’re offering. The closer we get to April the more aggressive their feeding habits become. Thank The Lord for rising water temperatures and stronger tides.

Wind has been inconsistent, as should be expected this time of year. The notorious “washing machine” effect of very hard southerly blows for a few days, then a hard blow out of the west, followed by a hard blow from northeast and east, before turning south again, can make it challenging if not impossible to find suitable water clarity.

The water doesn’t have to be gorgeous to catch fish, and I am honestly not much of a fan of beautiful clear water. Sure, water that’s emerald green and reminds you of the Bahamas is pretty to look at but you’ll need some color streaks or a little bit of sandiness to make the fish less nervous and therefore willing to offer reaction strikes, whatever lure you’re throwing. My point is not to become discouraged over dingy water. When you know the fish are there, summon the confidence to stay put and grind a while.

April initiates the trout’s first spawning of the year, a time when they begin feeding more aggressively. With that extra “baby weight” (eggs), April can be the best opportunity to catch the heaviest fish of a lifetime. Kind of like a pregnant woman, the spawn can make the trout mean and unpredictable, ready to kill and eat anything that annoys them. Right before they begin to spawn they are known to devour unusually large mullet. Some old timers say it’s to help push the eggs out but I’ve never been able to verify this. What I do know is that a large topwater during the spawning period will draw some incredibly vicious strikes.

West Bay fish are in a late spring pattern already with the warmer than normal water temperatures. Fishing hard sand flats with a lot of shell has been the most productive. Wade fishermen have had good success throwing topwaters whenever there are plenty signs of mullet present, and also rattail soft-plastics such as MirrOlure Provoker on 1/16 ounce Bass Assassin Pro Elite jigheads. Redfish have been abundant over thick shell adjacent to deep water and have been caught as shallow as ankle deep over grass on warmer days. As the water temperature continues to rise, expect better catches towards San Luis Pass and like areas.

East Bay has been inconsistent but there are still decent numbers of trout staging around marsh drains. If timed right, you can have a memorable catch around these drains on outgoing tides throwing small soft plastics, but mostly only keepers size-wise. Redfish are thick in back lakes and on mud-shell bottoms towards the back of the bay. As April approaches, sandier flats will heat up for wade fisherman and become more consistent with topwater lures. Don’t be afraid to stop off on a slick or two out deep on the numerous oyster reefs that make up much of the floor of East Bay. Late April can be fantastic drift fishing over these reefs with MirrOlure Lil Johns rigged on 1/8 ounce jigheads.

Upper Galveston Bay has been producing decent numbers of trout and redfish and even a few healthier-sized fish. I will refrain from saying “big trout” because it’s honestly been a couple years since fish over the seven-pound mark have been seen, apart from a few rare landings. Trout in the three- to four-pound class are achievable and they’ll get the blood pumping nowadays, for me anyways. Working drop-offs with soft plastics on cooler days has been a good tactic. On warmer days, working shallower flats with oyster shell, throwing Corkys and topwaters, will become more of a routine.