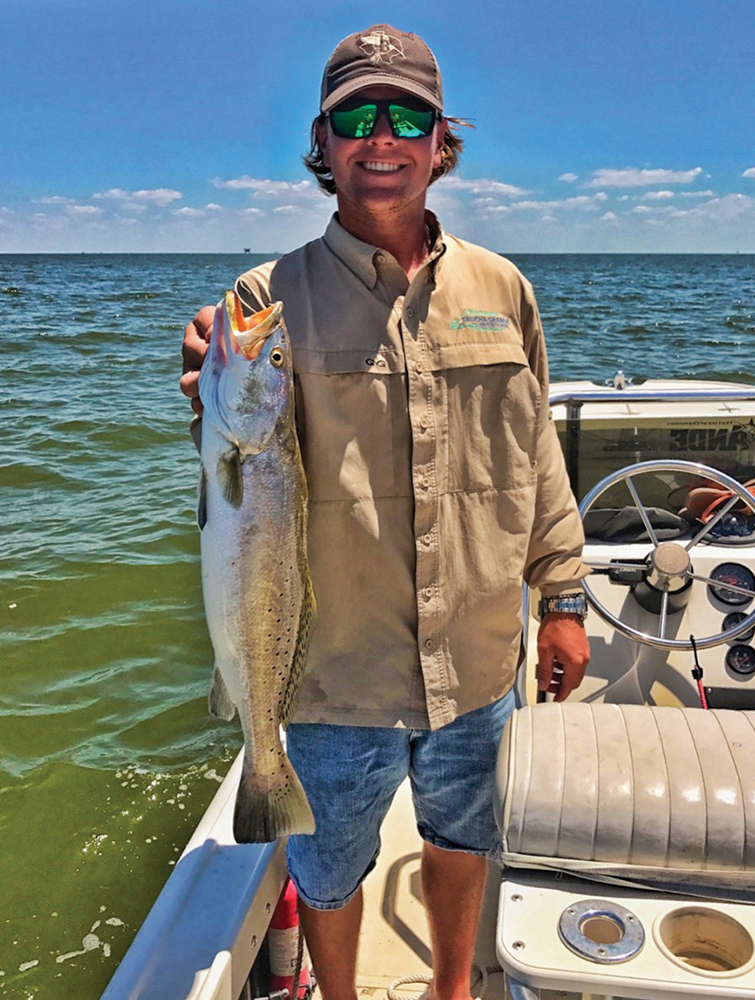 August on Galveston Bay can be nothing short of phenomenal due to the weather patterns that dominate this month of the summer season. Options become nearly endless during light wind and zero-wind days. Due to the great majority of our fish living in the middle of the bay, it’s almost impossible to get on them when the wind is blowing 20+ mph. However, when it’s calm you can go wherever you want, whenever you want.

Too bad we do not still have the vast schools of trout as we did in years gone by. Nowadays we have to play it smart and live or die on a school we were lucky to locate. The days of leaving fish to find fish are pretty much gone. Whenever you find a pattern, you better camp out. Needless to say, the calm winds of August will allow more time on these schools though, and hopefully several days of fishing success before they break up or move on.

If I was allowed only one word to describe what’s been going on around the Galveston Bay System I would say inconsistent. Fishermen have had some great catches in the areas in and around West Bay but these patterns are typically short-lived and heavily pressured.

East Bay has been pretty slow on average, and whenever you do catch something you better have your Check-It-Stick handy.

Trinity is gutted with freshwater again, the same as it’s been the last five years.

As negative as I probably sound, I do believe it will eventually turn around. Our saving grace will come on September 1st when our new 5-fish limit will take affect. It won’t be a cure-all, at least not right away, but I’m willing to bet it will be a huge step in the right direction. Give it two or three years and I’m willing to bet we see a big difference. Better late than never…right?

Last year at this time I expressed the need for everybody to fish smarter and more conservatively, which I believe continues to be as important today as it ever was. Fishermen must stick together as a group that loves this bay system and the sport of fishing and take better care of our fishery. We need to do away with the kill-em-all mentality. Gone are the days when good ol’ Galveston Bay could cough up liberal limit after limit, year after year. While we’re at it, we also need to ditch the posting of hero stringers on Facebook with captions to the effect…“Nobody saved me any buffalo!”

When I say to fish smart, what I mean is that we have to slow down and dissect every detail of what’s going on to understand the reason why the fish are doing what they are doing and why they are where they are. Often times we get into a rush and want to power through an area or pull up to a spot and give it ten casts and keep rolling.

Fishing smart means slowing down and locating fish, and then finding out what they’re willing to eat. Once you get a few sessions like this under your belt you will be ready to carry the knowledge to other places and other schools of fish without wasting a whole day running around and practicing your long distance casting.

I remember years ago on a wade fishing trip with Mickey Eastman, we were fishing a rather small cove and I wanted to push forward while fan-casting a topwater. After thirty minutes without a bite, I said to Mickey, “Let’s get out of here. They’re either not here or they’re not feeding.” Mickey just looked at me and dryly replied, “We aren’t going anywhere.”

Two hours later and still no bites, we finally saw a slick pop. Within an hour we had experienced a day I will never forget – literally a dozen or more fours and fives, a couple of sixes, and three over seven pounds. This is just one of many examples why it pays to slow it all down and study everything that’s going on around you.

In closing, I wish everyone the best on the water and I encourage everyone to try to fish smarter and learn as much as you can. The fishing will get better and we will be just fine. The slowest of days are often when we learn the most. I hope to see you all on the water soon. – Captain Caleb Harp