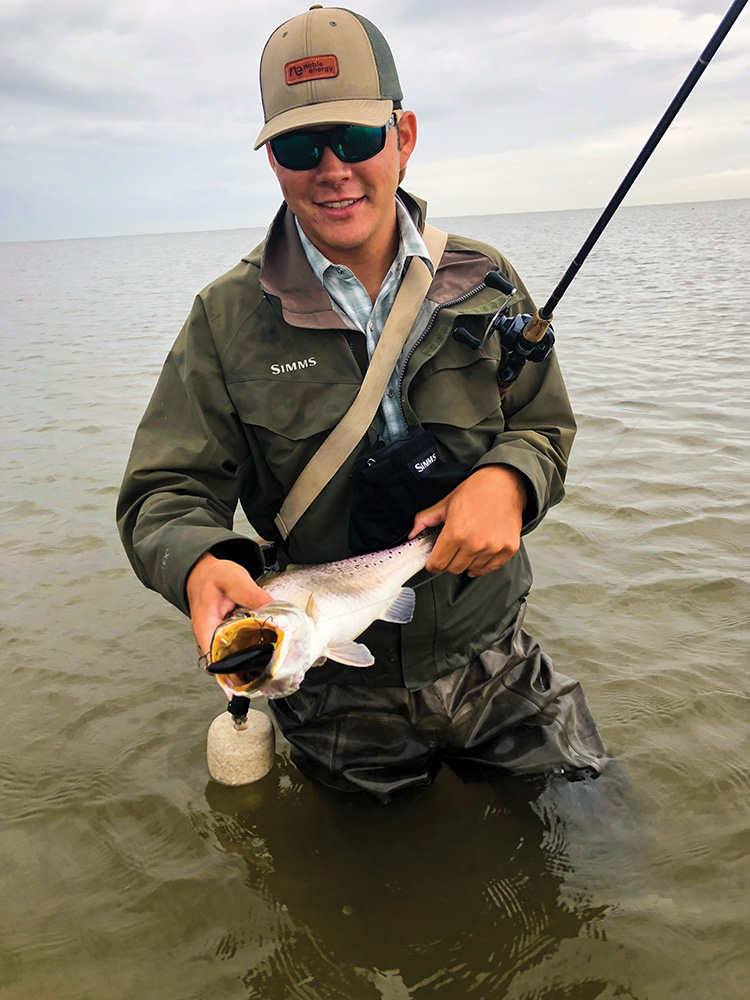 Capt. Thomas Francis says the trout are running to the small side but a ton of fun when it’s every cast on topwaters.

As most of you probably already know, the upper portion of the Trinity River basin experienced exceptionally heavy rainfall back in October, which kind of put a new spin on the freshwater inflow situation. Although we didn’t experience nearly as much rain locally, the rivers and tributaries north of us got slammed and, like always, “you know what” runs downhill. By no means is this abnormal, in all actuality this might be the new normal. Four years in a row the dam at Lake Livingston has recorded 80,000 cubic feet per second discharge, or greater. Luckily, the river and lakes have receded quite a bit and things are starting to shape up for the better. This flood wasn’t nearly as bad as the 2015, 2016 or Harvey floods but it did interrupt a few programs that were producing nice catches for anglers in Trinity and parts of East Bay.

Prior to the little flush, Trinity was actually in pretty good shape and the fishing was improving in the back. Redfish were plentiful in the back of Jack’s Pocket and around any kind of shell in 1- to 4-feet of water on topwaters and paddletails. The trout bite was beginning to turn on drifting old clam shell beds and there were actually a few good groups of birds that had keepers under them. If the freshwater will get away before too long, this pattern will stay true until the water temperature drops too low come January.

Trinity can be a phenomenal bay to fish during the winter months. The whole north end of the bay is composed primarily of mud/shell, which is exactly what you want to key on during the month of December. The bayous that stretch out from the deep Trinity River delta create a rich estuary with plenty of forage and current, as well as deep water getaway whenever the tide drops out after a front. Focusing on these deeper holes this time of year is important because as soon as the sun pokes out the fish will come out and start feeding aggressively.

West Bay has been good for anglers fishing shell reefs in 3-4 ft of water and wading mud on the south shoreline. Mullet are going to be key this time of year in West Bay so when you’ve got the bait, you’ve got fish. You just have to be patient. The harder it blows, the better the bite will be because it’ll streak up the water. West Bay can get too clear this time of year so any color difference will help out a lot.

East Bay has been good for anglers working bayous and drains whenever the tide is up. As the cold fronts because more frequent the very back of the bay will be a better bet. Mullet is key here as well so keep your eyes peeled. Redfish action has been good in the marsh on higher tides.

Wade fishing during winter has always been more consistent for finding numbers of trout. You don’t have to fight wind direction and velocity nearly as much as fishing from the boat. Having said that, though, there are a few situations where drifting can be a much better plan. Take for instance some of the areas in Tabbs Bay and other bays going up toward the San Jacinto River, and also in the back of East Bay near Oyster Bayou. The mud in these places will have you sinking to your waist and that just doesn’t work. So here’s two instances where drifting will always trump wade fishing. Nobody likes hanging $9 Corkys on shell where you cannot wade up and get your lure back.

Equipment is probably more important in winter than any other season. The fish don’t just jump in the boat; you have to work for them. You need equipment that works hard for you, not against you. Leaking waders and jackets won’t cut it on cold days; that’s why I always buy Simms gear. Yeah, it’s expensive, but it lasts far longer than any other brand I’ve used.

That same strategy applies to rods. A good high-modulus graphite rod is going to help you feel those softer bites this time of year and whenever you’re throwing a Corky or a twitch-bait like the new Jay Watkins Series Custom Double-D by MirrOlure. You need a fast tip with some real backbone in the mid-section. The Waterloo Ultra Mag is perfect for these applications.
Stay safe and only keep what you need. -Caleb