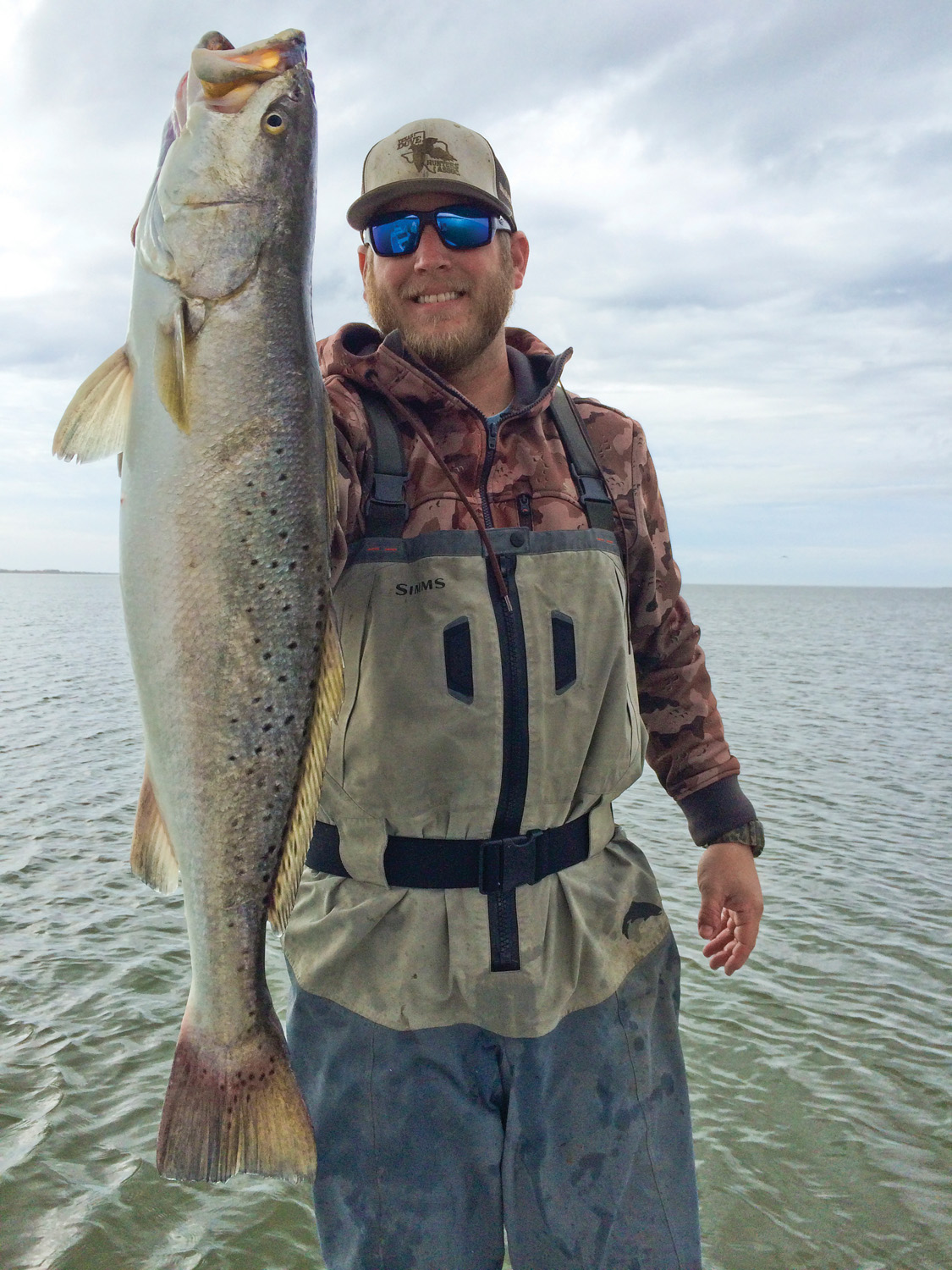 Fishing in the Galveston Bay complex has become pretty consistent for the most part, considering how slow it was during fall. Maybe it’s because we’re actually getting some winter weather for a change. Let’s just pray Mother Nature doesn’t throw any curves this month.

February has always been one of my favorite months to target big trout. The dead cold of January is behind us and we’re not yet into the dreaded spring transition that comes in March.

The fish lately have been hanging out on oyster-filled mud flats situated near deeper water. This time of year, with frequent cold fronts, the fish need a deep refuge they can slide into whenever the water gets blown out of the bays. Fishing next to channels, deeper bayous, canals, etc., will be your better bets, on average. Fish use this deeper water to hide whenever the water level drops sharply following a front, and then creep back up on the flats to feed whenever the tide comes back in.


As the water temperature warms up, the bait will become more active on the surface. You can pretty much bet that where there’s bait there’s game fish.

Even when bait is located, the bite during the winter can be kind of finicky, and it’s because of the crazy weather swings the fish have to endure. Plus, at this time of year with predominantly colder water temps and lower metabolism, they don’t need to eat every day. You’ve just got to be patient and keep on grinding until they finally turn on. Luckily, our bays are holding plenty of smaller, recruitment-sized fish. So even on slower days, you can generally still get a lot of bites.

I believe lure selection is more critical this time of year than perhaps any other season. What I’m describing here is lure size and sink rate to match subdued feeding moods. Think larger profile soft plastics, light jigheads, slower sink rates, and lures that will almost suspend in a fish’s face long enough for them to finally take a swipe at it.

Some guys get hung up on colors but I do not place so much stock in that aspect. To me, color is more of a confidence thing. If you have confidence in whatever color you’re using you will try harder and be more attentive. When someone asks what color they should use, I say, “Whichever you feel you have the best luck on or looks the best to you.”

But, there’s an exception to every rule and when the water gets all churned up or stays crystal clear for days, you definitely need to make color adjustments. In murky water I like a bait that is predominantly dark with a contrasting tail. Texas Roach and Morning Glory seem to work well. Purple Demon with a white tail is another.

The opposite goes for clear water. Here I prefer more translucent baits such as a Day-Glo, Opening Night, Blue Moon or Chartreuse Ice.

Plum and other shades of purple turn out to be what I term multi-purpose baits as they work well in both murky and clear conditions. Good examples are plum-chartreuse, Geaux Gleaux and Slammin’ Chicken.

West Bay
Areas that have deep water access or lie close to deeper sloughs have been producing steady trout action. Subdivision canals have also been holding some nice fish. Drifting guts and ledges has been a slam-dunk when weather allows. Wade fisherman have been doing well on the shorelines, depending on the wind direction. North shore with south wind and south shore on north wind. This pattern should continue through February and might even show greater consistency in the latter weeks.

East Bay
East Bay has been full of fish on the south shoreline and along the Anahuac Wildlife Refuge shoreline. Not many true giants have been caught but a lot of good numbers and fun fishing. Prior to the recent nasty fronts, the topwater bite had been really good in front of drains. Consistently colder water temp makes for a steady Corky bite in these areas. I expect to see this pattern continue until spring, and hopefully some heavier trout will begin to show soon.

Trinity Bay
Trinity Bay has improved of late but the fish have been somewhat isolated in tight schools. Jack’s Pocket has been the steadiest producer of both trout and redfish since the colder temps set in. I look for action to pick up along Trinity’s east shoreline as soon as water temperatures begin to rise and stabilize in the mid-50s.