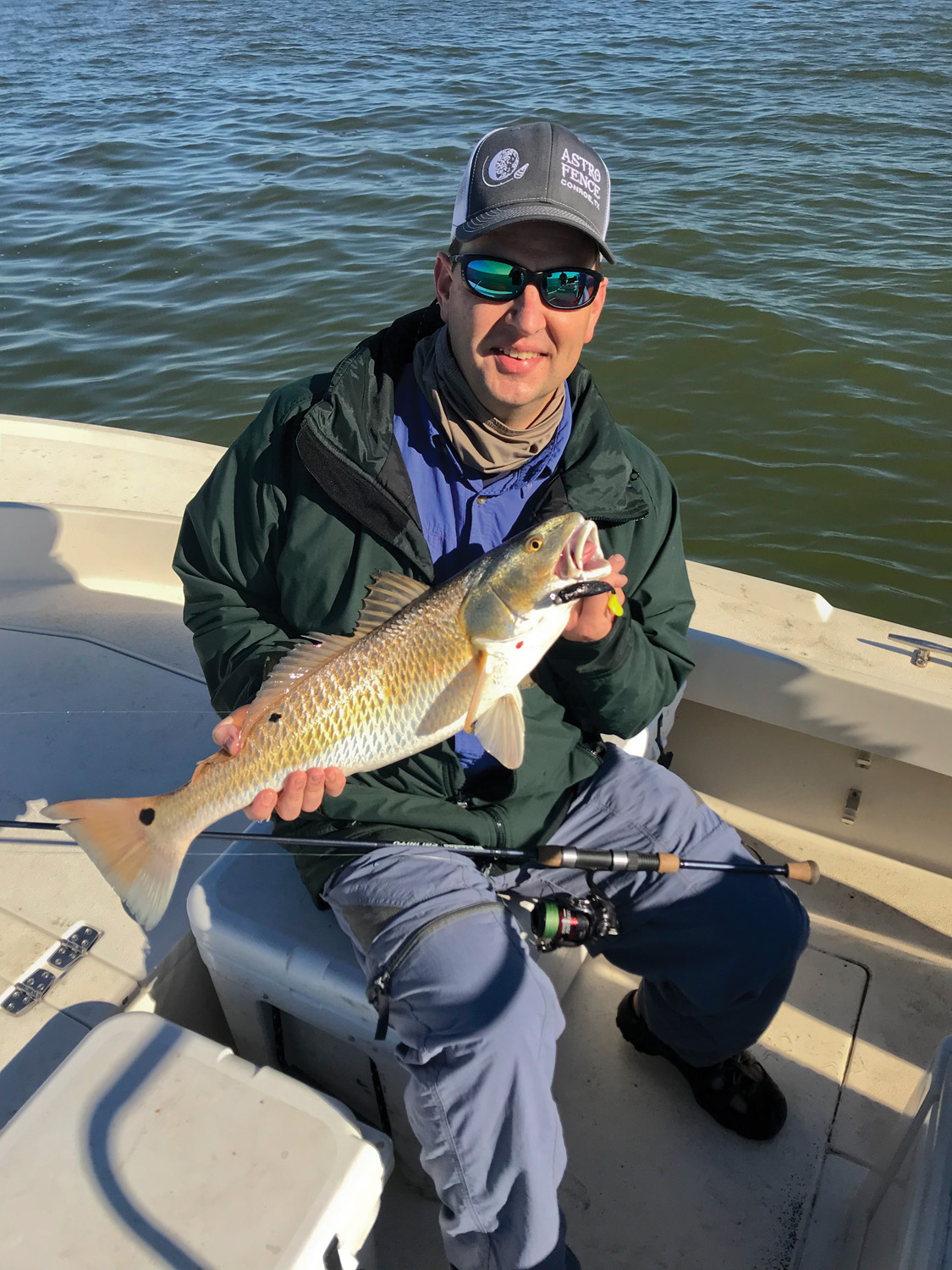 Two days after a front - Jason Kramer with a nice red on a MirrOlure Marsh Minnow.

January is usually our coldest month, according to weather statistics, and therefore a difficult month to pattern and target fish. Mother Nature throws some wicked curves and, naturally, the stars do not align as often as we’d like. Gusting cold fronts roll in from the northwest, blasting nearly all the water out of the bay and the barometer begins to soar as soon as the front passes. Veteran guides and professional anglers have battled these conditions and tried to find a way to catch big trout during a front with little success. Sure, prior to the front can be phenomenal, but during and immediately after can brutal.

First of all, gale force winds as the front crosses are just too dangerous to be on the water. Navigation remains hazardous for a day or so with all the water pushed out. The first day or two following a front can deliver chamber of commerce weather but with the barometer peaking we find another problem – the fish will have lockjaw and are not likely to feed. Generally, long about afternoon of the second day, definitely the third day, the barometer starts to fall and the fish will start to chew again.

When discussing wintertime fishing, the fish will go into what I like to call “survival mode” and drop into “deep water getaways” hiding from the icy blast. You almost have to picture this process like an animal going deep into its burrow for the winter. Fish seem to be programmed to gorge feed when they sense the approach of the front, as though they know they won’t be eating for a few days. But we know they have no such reasoning ability – it’s instinct.

The disappearing act during the front, pulling down into deeper water, is another response to survival instinct. They seek warmth mostly, and safety from ripping currents, as water is raked from shallow areas by wind.

The pre-frontal feeding frenzy is what makes wintertime fishing so good; you just have to time it right. Several hours before the front arrives, you need to be on a flat adjacent to deeper water with lots of visible bait. Post-front, your best bet is to be on the edge of that or a similar flat as the tides slowly return and sunshine brings warmth back to the shallows.

Just so we’re clear on location, a “deep water getaway” can be anything from the channel of a bayou or inlet, a shipping channel or barge canal. Typically, whenever the water comes back after a front, the fish will follow the rising tide. You have to give these fish time to settle in and start hunting again, though. A good rule of thumb is that whenever you see bait returning to the flats, the predators are there as well.

I’m pickier with lure selection in January than any other month. I try not to use the word lethargic because people take it wrong, but when it’s freezing cold they do become more selective in their feeding. Always remember that fish have to eat to survive, they do not hibernate. Even though they slow down they’re still burning energy.

The Corky family of lures are famous favorites for winter fishing and rightfully so. Each model has its niche but the common denominator is the slow-sinking, almost suspending characteristic they exhibit – easy targets that can fill a belly with little effort expended.

But this is Texas and it doesn’t stay 40⁰ forever. As soon as the water temperature rises to about 58⁰ I will start throwing topwaters again, if bait is present. Don’t get discouraged by the bad weather. Any day you go out and learn something is a successful day of fishing.

West Bay
West has produced some great catches behind cold snaps. South shoreline coves have turned on. On colder days with off-color water, waders have reported trout running 4-to 6-pounds. Size diminishes to 2-pound average on prettier weather days. This should continue through January.

East Bay
East has been giving up good numbers of keeper-size trout. Occasional heavy stringers are coming for waders at the back of the bay near Oyster Bayou and Anahuac Wildlife Refuge – typical this time of year.