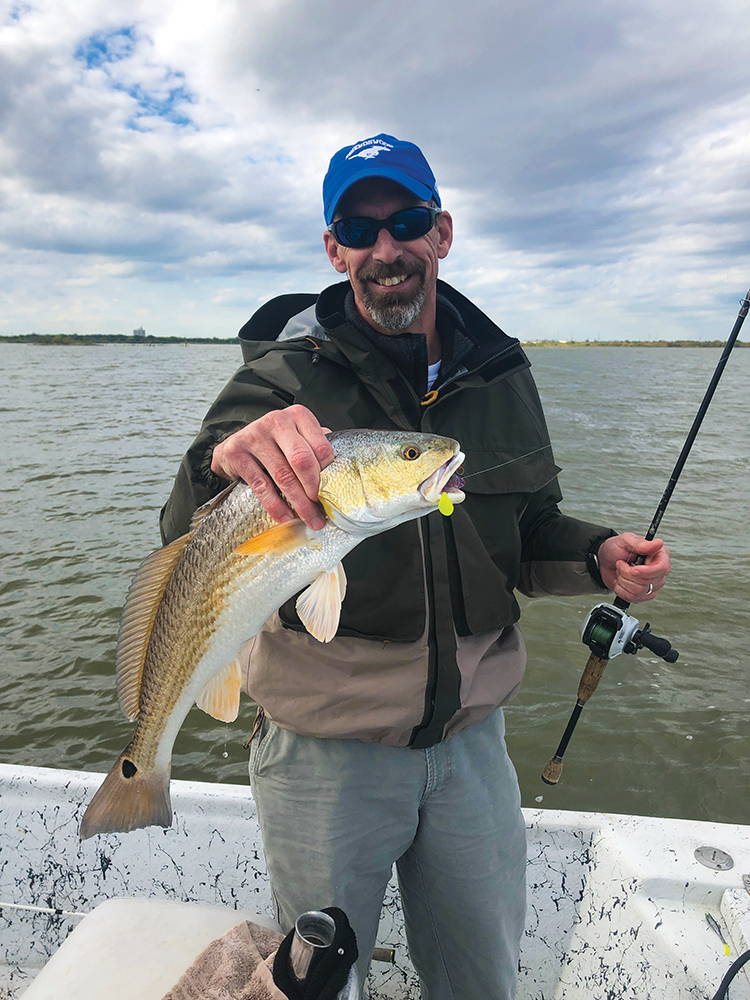 Happy client with a healthy December redfish. Capt. Thomas Francis has really been on the reds lately.

I like January fishing best when we’re experiencing a true old-fashioned winter. The general temperature trends of November and December begin to stage fish onto their wintering grounds but I do not believe they adopt a true winter pattern until it gets cold and remains cold for a prolonged period. Fronts in January become more consistent and this is what allows the ability to consistently predict where they will be holding.

Some fronts arrive with vicious northwest winds, pushing most of the water out of the bays, followed by a few days of high barometric pressure. Many longtime guides and professional anglers have battled these conditions and tried to find a way to catch big trout during that period with little to no success. Sure, prior to the front can be phenomenal, but during and after can be brutally slow.

First of all, when the front is barreling through it is simply too dangerous to be out and about. And after the front, you may think the weather is beautiful, but a cloudless sky is generally the signal that barometric pressure is too high for serious feeding to occur. The rule of thumb is to wait two days and they’ll be snappin’.

I have seen people get discouraged from fishing this time of year because of the cold or the frustration that fronts add to the equation. The best advice I can give you for high pressure days when fish aren’t biting is to use that opportunity for scouting. Days of extreme low tides provide exceptional opportunity to locate reefs, guts and ledges you may not even know existed. Take off walking the guts that are normally too deep to wade and find shell with your feet. I have found some of my most productive areas exploring without the distraction of being in the middle of a good bite.

Fishing has been pretty decent across much of the Galveston Bay Complex whenever the weather allows. Trinity is still pretty fresh and as I write this the weatherman is predicting that we could receive an additional 2- to 6-inches of rainfall tomorrow. Let’s keep our fingers crossed – Trinity was only beginning to recover from the last big deluge in the Trinity watershed.

East Bay has been fairly productive but nothing too big trout-wise just yet. West Bay has probably been our most consistent region. Along with more stable salinity levels, West Bay offers many areas with excellent deepwater getaway for trout to slide into when water temperatures dip too low for comfort. The Upper Galveston Bay system, up along the ship channel, has been producing steadily as it normally does this time of year – vast expanses of deep channels that provide cover and warmth when the northers come screaming through.

West Bay
West has produced great catches behind cold snaps. South shoreline coves have been especially productive. On colder and windier days when the water turns off-color, wade fishermen have been catching trout of 4-to 6-pounds, but on prettier days the average seems to shrink to two pounds on average. This pattern should remain through January. Fat Boys and Soft-Dines will be excellent baits. Deep holes adjacent to waterfront neighborhoods and bayous will hold lots of fish when the water temperatures plummet.

East Bay
East has been good for numbers of “keeper” trout. Occasionally a few really solid stringers will come from wading the back of the bay by Oyster Bayou and around the Anahuac Wildlife Refuge. Typical for this time of year. Keying on water level is always important in East Bay. You really need to have some decent tides for the larger trout to pull up along banks and feed regularly. You might want to experiment with topwaters on warmer days but the Corky family and 51M and 52M MirrOlures will produce steadier action on average.

Upper Galveston Bay
The Upper Galveston Bay region is the area with the most deepwater getaways due to the Houston Ship Channel running straight through the middle of it. Areas like Tabbs, Scott, Crystal and Burnett bays can be some of the best and most consistent this time of year. But – these areas are also going to have the most boat traffic for that same reason. Soft plastics are often your best bait choice here, given that fish are usually tightly schooled and the bite can be fast and furious when the conditions get right and they really turn on. Vary your jighead weights to match the depth they’re holding in and the current strengths. Bottom conditions are almost entirely soft mud but if you know that country well enough there are a few places you can wade.