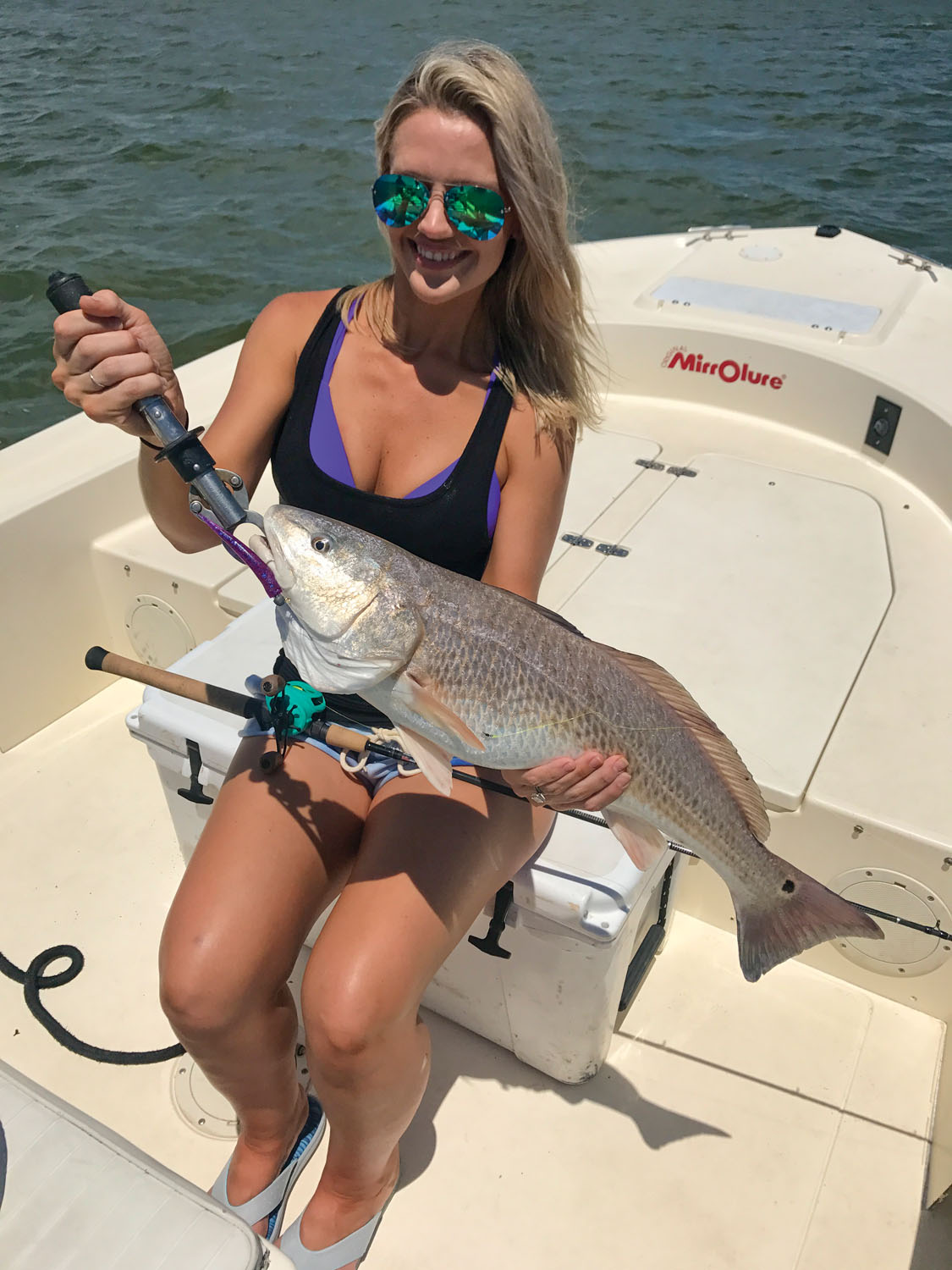 Chelsea Burns was all smiles after landing this slot red.

As I mentioned last month, we are just now beginning to experience what I call normal fishing conditions across the Galveston Bay complex. Our salinity is mostly back to normal and the water is pretty clean, depending on the wind, of course. Assuming everything stays on track, July should give us great fishing. Actually, July is one of my favorites. By mid-summer the weather and fishing patterns have stabilized and the bite becomes more predictable.

Now, let’s all knock on wood that we don’t pop another flood, we should be set to enjoy great fishing in most of our “normal” summertime holes. I’m somewhat gun-shy to say that, seems that having said it last year and the year before totally backfired on me. Hopefully it will not come back to haunt me this year.

Measured as a whole, the fishing has been good. Some days are easy and some are tough but we really cannot complain. Most of our success could be attributed to the mild winter and early push of gulf fish through the jetties, which we call tide-runners. There are areas that have held schools of resident trout that survived through the winter and spring, but those natives seem fewer in number than the those that arrived recently.

We say this because the trout seem more numerous along the migration routes fish are known to travel as they enter the bay system. Spoils and humps along the Houston Ship Channel are prime examples. It would be abnormal for these points of structure to attract such numbers of resident trout this early in the year, which seems to reinforce the theory that many of them came up from the gulf. I believe that as salinity continues to improve and bait moves further up the channel, these fish will eventually end up in Trinity Bay.

Once they find suitable habitat and forage remains plentiful they should be willing to stick around until the conditions change.

Summer’s elevated water temperatures cause fish metabolism to rise accordingly, which means they will feed more often and for longer periods. Expect to see trout slicking more frequently and pushing bait to the surface and attracting hungry gulls and pelicans. Slicking fish are easy to spot and they’re easier to stay on than drifting blindly will ever afford. Lighter summertime wind will allow us follow them across open water – places we normally cannot fish in the gustier spring months.

West Galveston Bay
West Bay has been good for waders on the south shoreline down toward San Luis Pass. The sand flats and guts are holding both trout and reds. Topwaters have been effective during feeding periods and soft plastics will dredge up a few when they are not as aggressive. That whole area of lower West Bay stays good most of the summer, allowing waders to target fish traveling through the pass. Redfish have been prevalent on the north shoreline from Mecom’s down to Carancahua Cut, over grass in about 1- to 2-foot depths. Weedless rigged paddletails like the MirrOlure Marsh Minnow can be great lures whenever the fish are right up against the grass.

East Galveston Bay
East Bay has been the most consistent trout producer of all our bays. Drifting the mid-bay reefs has been a great tactic for targeting trout, even if a bit crowded at times. Working shell in 5- to 8-feet of water with MirrOlure Lil’ Johns and Provokers has been effective for solid keeper fish. Recommended jighead weight is 1/8-ounce for probing the full water column. Redfish action has been decent on spinnerbaits and GULP! along the ICW between High Island and Rollover. Gulp! Shrimp under a popping cork against the rock walls and bluff banks adjacent to bayou drains and marsh ponds should help you find them.

Trinity Bay
Trinity Bay may finally recover to her old self. There have been a few fish caught at the wells on the south end, a good sign, but still not up to par. We typically do not see the well pattern kicking off until Independence Day, so time will tell. This pattern will be hard to pass up if/when it goes off in normal fashion. Plastic baits rule here when bumped across the shell pads around the wells and I am particularly fond of the MirrOlure Marsh Minnow and Lil’ John on 1/4-ounce jigs. Stronger tide currents require 3/8 jigs to get the baits down. Redfish have been good up in Jack’s Pocket over clam shell on gold spoons and GULP! Shrimp under popping corks.