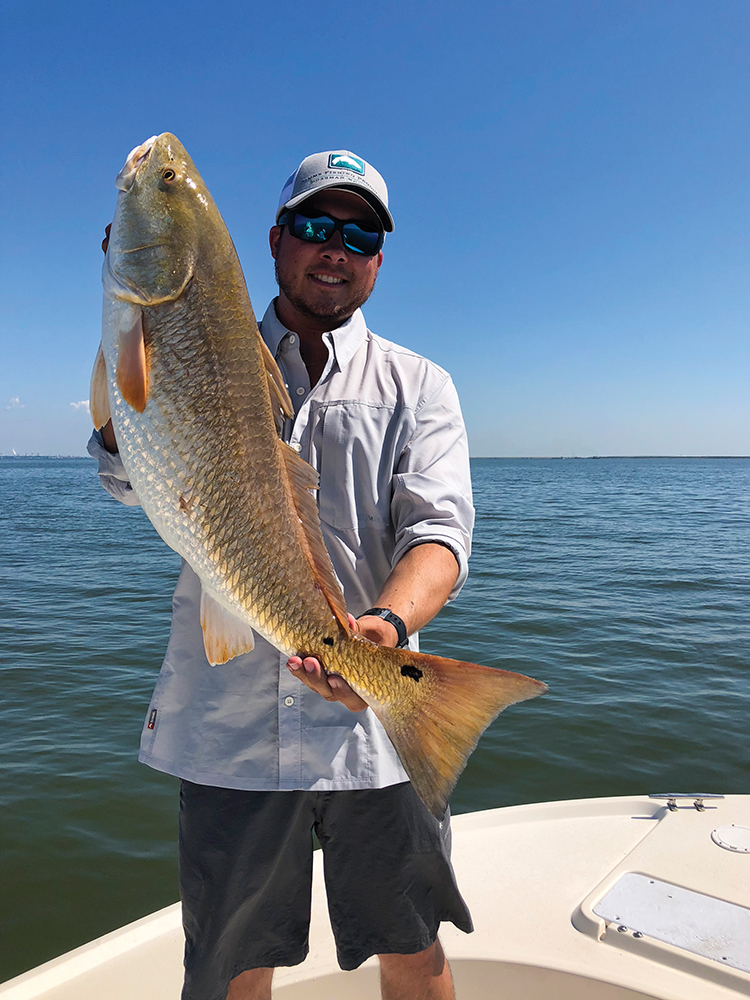 Darrell Palmer with a bull red from an open water school.

July typically brings stable weather patterns that includes lighter winds and calmer bays. This will be a great improvement, coming off recent weeks of windy, stormy conditions. I’m not sure what is going on with these continual west and southwest winds but they’re welcome to go away anytime.

In general, any amount of west or southwest blows water out of our bays and greatly diminishes the strength of incoming tides. Galveston Bay system’s hydrology works best for fishing when the prevailing wind comes from the southeast. Hence the “sweet southeast” nickname. Southeast wind pushes water into the bays, increasing the strength of incoming tides. Several days of predominantly west/southwest drains the bay and usually puts the kibosh on the bite.

Being that July mostly gives us calm conditions, we can all quit complaining and enjoy a wider window of fishing opportunity. More water in play means we won’t all have to crowd into small areas. Lord knows it’s going to be hot, though. But don’t let that scare you away from enjoying a day on the water. Often times people don’t want to grind all day in July heat but if you know the Galveston Bay System very well, you probably already know how good the fishing can be.

Stable summertime weather patterns allow us to fish just about anywhere we choose, and when we are able to locate schools of trout on deep structure they tend to remain there as long as the bait holds. Sure, spring weather is hard to beat, temperature-wise, but dealing with the spring transition and all the crazy wind gets lots of folks to thinking they’d just rather have a crawfish boil. If you can stand the heat July is definitely game-on in the catching department.

The fish aren’t super spread out right now, which means you cannot simply drift around all day and expect to catch fish wherever you end up. You have to pinpoint the schools and stand on them. With all the new technology in Power Poles, GPS, and iPilot trolling motors with “anchor mode” capability, anglers nowadays have greater ability to position themselves right on the school without drifting away from the action. It seems lately that if you keep trying to re-drift or troll around a spot you will eventually lose the school and risk not being able to find it again. The days when we could make a short move and find another school are over. We don’t have nearly as many fish, so you’ve got to play a lot smarter.

It amazes me that with as much information as we have at our fingertips fishermen don’t seem to be able to read the handwriting on the wall. Like I’ve talked about in previous articles, we don’t have to wait for the new limit changes to be implemented in September. We should change the perception of why we fish today.

Fishing doesn’t need to be about killing every legal fish we catch. Learning the patterns, tricking fish, having a good time, and enjoying the day for what it’s worth is what it’s all about – or should be. Try to keep only what you need for dinner and release the rest. That’s the beauty of fishing. You can throw them back and still have a good time. If you’re truly so hungry you have to kill everything, you might want to take up another hobby…one where you can earn a few extra dollars for groceries.

West Bay has been good for wade fishermen on the west end and around San Luis Pass throwing MirrOlure She Dogs and Provokers. East Bay has been a bit inconsistent but when the tide is right the reefs have been producing solid trout. There have been a lot of smaller fish spread all over the bay, so getting bites hasn’t been a problem. Just be patient and handle the little guys carefully on your way to the better ones.

Redfish have been good in open-water schools in the middle of the bays, pretty much hanging with rafts of mullet, menhaden and ribbonfish. The Houston Ship Channel spoils will become more consistent for trout as the weather settles in July. Everybody is anxious to see the tide-runners coming up the channel toward Trinity Bay. Let’s just hope the salinity improves in time for their arrival; it’s pretty much a muddy mess right now. Barring any unusual rain events between now and the end of July, I expect Trinity could make a rebound toward the middle of August, certainly by Labor Day.

Be safe out there and enjoy your fishing.