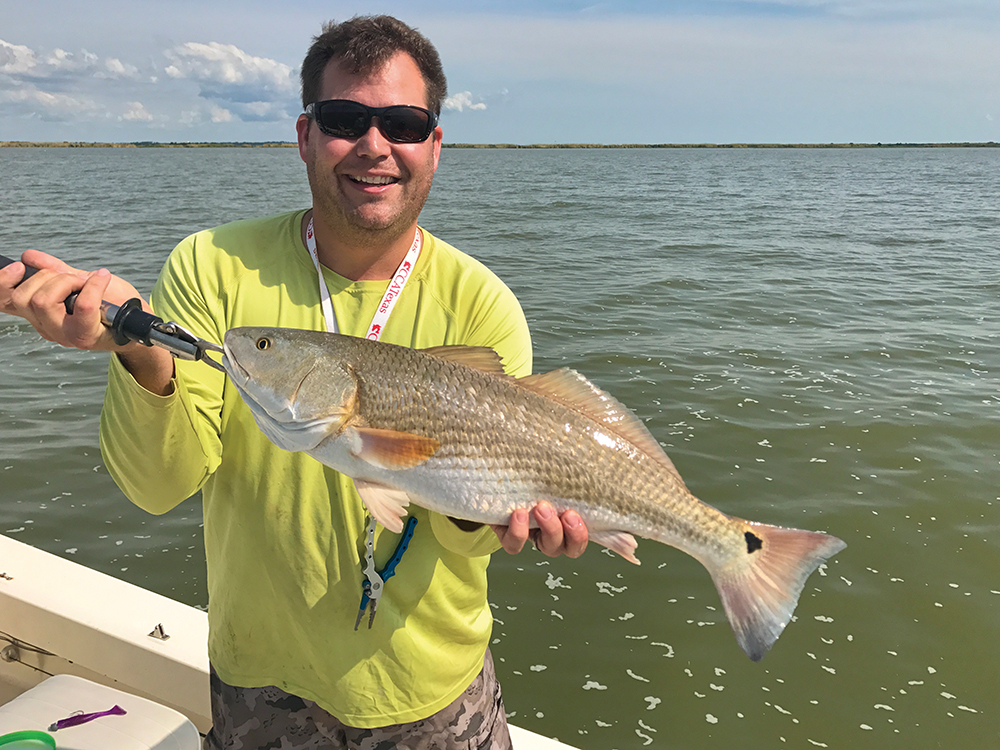 June is a favorite month of many Galveston anglers and I have to agree. Honestly, any time spent fishing is a good time but June’s consistent weather and good catching in most all corners of the bay complex is what makes it a favorite of mine. June can be a fantastic time to adventure around and find new schools of fish, given that the weather is generally friendly and the “tide runners” usually appear in strong numbers. Wade fishing can be a great tactic during summer on sand flats and close to passes. The redfish action is usually consistent and widespread.

I almost hate to talk about how well our salinity is improving because it seems every time I do it brings bad juju on us. Of course, I’m writing this story a couple of weeks before you’ll be reading it, but I do think that we’re finally going to be in good shape. I hope to see good fishing in the northern stretches of our bay system this summer.

Our tide-runner trout seem to be arriving late this year as most patterns are a month behind schedule due to late cold fronts that we battled weekly in April. My prediction is that by mid-May we should see promising signs of new recruits and they will be most welcome. As the shrimp and other forage migrate into the bay, these trout will follow and ride the tides in search of easy meals – hence their nickname. Sooner than you’d expect, these new fish will be coming up the ship channel, and hopefully all the way to Trinity Bay.

Until the tide runners get fully positioned in the northern parts of the bay, the normal summer patterns are always going to be a good bet. Drifting the oyster reefs in East Bay is always going to be a ticket to finding lots of trout throughout the summer. Most all of the oyster reefs in East Bay are marked with PVC poles signifying the oystermen’s leases within those reefs. Using your sonar, you can find particular high spots and fingers that jut from major reefs, features that concentrate schools of trout. Drifting with soft plastics is always going to be the best choice for getting bites. I prefer MirrOlure Lil’ Johns and Soft Shads. Try downsizing your jigheads as much as you can get away with. Often, I see people throwing 1/4 and 3/8 jigheads out of habit. I find substantially greater success throwing 1/16 to 1/8-ounce jigheads and I believe it’s due to the slower sink rate and more time in the strike zone. These fish suspend toward the top of the water column more than some anglers believe.

Wade fishing should still be great in West Galveston Bay, towards San Luis Pass and on grassbeds along the north shoreline. The north shoreline has lots of grass, potholes, and moguls, which all make for great trout and redfish habitat. These fish will use the potholes or sand pockets within the grass as ambush points. Throwing topwaters whenever there is a lot of active bait at the surface is a good plan but, I find a soft plastic paddletail such as a MirrOlure Marsh Minnow on a weedless flutter jig more consistent. Always be on the lookout for spastic mullet and don’t be surprised it if it’s a school of reds chasing them.

The Houston Ship Channel region will become a steadier player as the summer season develops, simply due to the consistent effect of tidal currents and deeper structure that surrounds the channel. Fishing the channel is often a hot spot for the croaker crowd but, believe me, you can get them on lures there, too. Nearly all the spoils along the ship channel have some amount of shell and can provide consistent fishing once you get the bite figured out.

The Exxon A-Lease gas wells between Smith Point and the ship channel are also known to hold lots of trout toward the end of June and into July and August. Be advised though, there are lots of submerged pipes and other hazards around those wells. You don’t want to get into a hurry bouncing from well to well and knock your lower unit off. Don’t let this scare you, just navigate slowly and with caution.

Toward the end of June we should see Trinity Bay’s Sun Oil and Exxon C Lease gas wells holding lots of trout. That’s a long guess on my part but definitely something to keep your eye on.

Always remember to have fun and enjoy your fishing. Throw ‘em back if you don’t need ‘em. Follow us on Instagram @harpsguideservice.