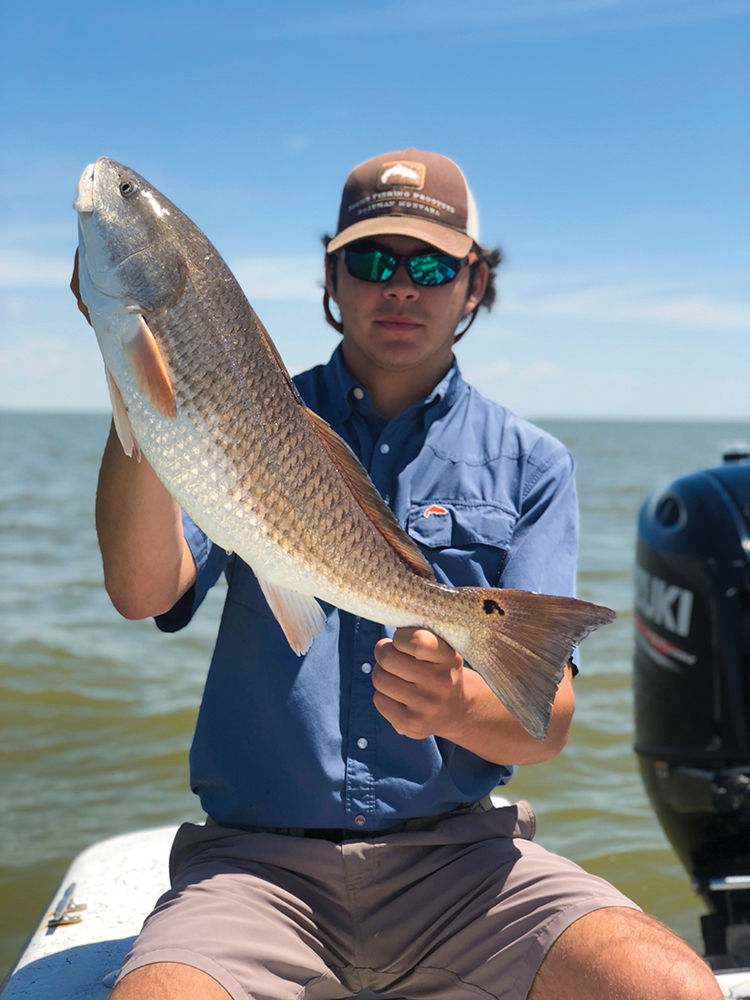 Capt. Thomas Francis with a nice slot redfish from an open water school on Galveston Bay.

The stabilization that’s been long overdue is finally here. Outside of a stray front here and there, everything seems to finally be moving into place. As a whole, our fishery is becoming more vibrant and lively than we’ve seen for the past few months. With the big uptick in fishing success, we have cause to wonder if it’s been sparked by the arrival of tide runner fish from the gulf to our bay complex, or it’s simply because the dreaded spring transition is finally over for good. I think it’s a little of both.

As tough as the fishing can get during the spring transitions, it’s very hard to get a good sample of how many fish we have in our bay when they aren’t feeding regularly. We definitely DO NOT have as many resident fish in our bay as we’ve seen in years past but our saving grace is the tide-runners that are coming in through the passes.

Tide-runner is a term that describes a fish that is not a full time bay resident, was likely born in the gulf, and enters the bay through gulf passes during the warmer months while following bait migrations. This occurs primarily on incoming tides. It is also believed that some of these fish will return to the gulf during fall when forage species such as mullet and others make their annual spawning runs.

Due to the recent mild winter and warmer-than-average bay water temperatures here in late-spring, the tide-runners have already started their swing and have infiltrated the bays in full force. This isn’t just a one-time deal either; these fish will come in spurts most of the summer. Given the number of tide-runners already inhabiting the bay, I think we have very good chances for an above average summer fishing season.

The migration of fish through the Galveston jetties, coming up the Houston Ship Channel, can be quite impressive to watch. These fish will show up one day like crazy and keep riding the tide as far as they can. The gas wells in Trinity Bay are kind of their final stop, making this area so good during the late summer months. The key to fishing these tide-runner fish is to intercept their migration and find out where they are likely to hold for a period. The abundance of baitfish and shrimp are keys to understanding this phenomenon. The areas of Ship Channel spoils covered with oyster reefs provide excellent structure to attract both bait and large schools of gamefish.

I am excited to see how this year plays out. Several of the old timers are predicting a return to “normal” fishing. That would be wonderful compared to what we’ve endured the last five years. Pray we don’t get another flood!

East Bay has been consistent for drifters on mid-bay reefs. Each reef is different and sets up differently in it’s own way, depending on how the tides are running and the bait congregates. It’s no secret that the reefs are a great place to catch trout in the summer months, especially after the last few years of madness that took place there but being on the right reef at the right time is critical. MirrOlure Lil’ John’s are my go-to reef bait most of all of the time. I like the Purple Demon whenever the water is stained to “trout green” and the Chartreuse Ice color whenever the water is clearer. Finding high points within the reefs will help you pinpoint schools of fish better and always keep an eye out for slicks to show you where the fish are moving.

West Bay has been pumping out some good stringers for wade fishermen around San Luis Pass. Working guts and sand flats around the pass can be quite productive in late-spring, throwing MirrOlure She-Dogs. Redfish are thick on the grassbeds of the north shoreline. Throwing paddletails like weedless rigged Marsh Minnows is definitely hard to beat – especially in and around sand pockets in the grass. These patterns should stay true for most of summer.

I wouldn’t expect much action in Trinity until these sporadic heavy rainfall events go away. As I type this, we’ve gotten another twelve inches of rain in the last week and the discharge out of the Lake Livingston dam is reading over 54,000 cubic feet per second. To give you a visual, Niagara Falls is 67,200 cubic feet per second. Those memorable trips in Trinity will become a reality again one day but, for now, we’ve got to trailer around or stay to the south.

Stay safe and enjoy your fishing.