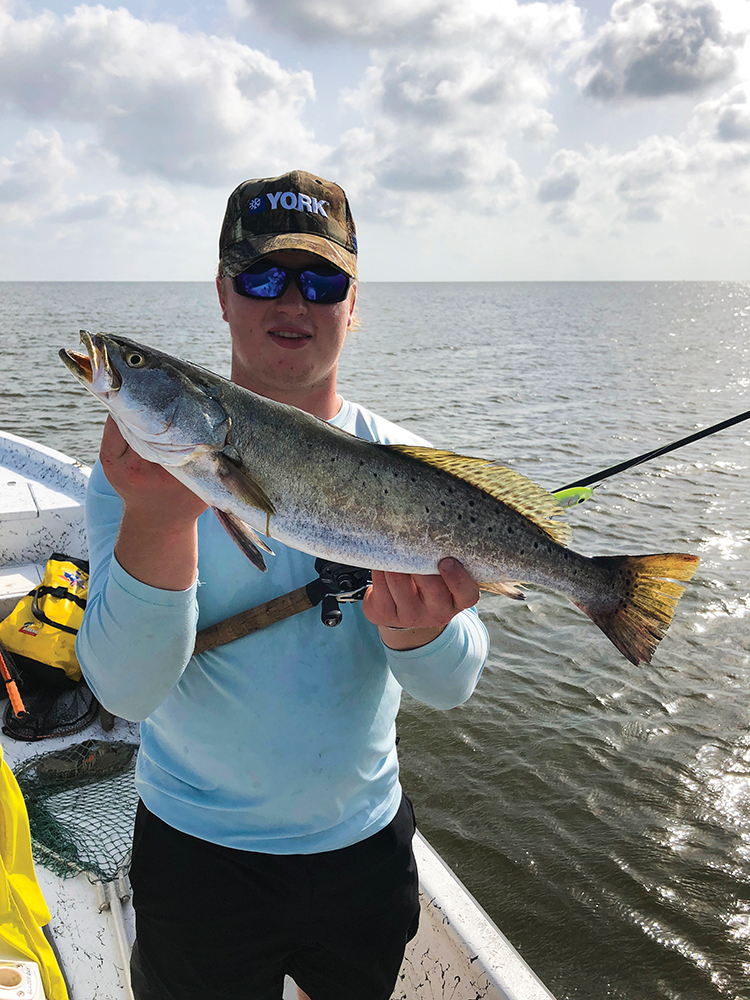 Drift fishing over shell with topwaters during May can be very rewarding.

Timing has been everything lately. Traditionally, April is always like this, though. You can go where there are fish, and you’ll have to sit and wait for them to go off. When the fish do go off, it can be very memorable but it’s often frustrating until then grinding on them. Fish are very temperamental this time of year. They need something to turn on their light switch and make them feed! Those things include a tide change, a minor or major feeding period, dusk or dawn. Sometimes we’ll fish the sunrise bite, minor, full outgoing tide, major and half of the incoming tide to no avail but as soon as the sun starts going down, hold on!! Sometimes the best thing to do is just go for the long haul because you just never know when that banner feed will happen.

May brings a little less frustration and more consistency to the bite. They’ll start to get into more of a routine. May is where we’ve gotten away from our spring transition and pretty much into the beginning of the summer pattern. This year has seemed to be a little a head of schedule so I think that our May fishing should be great!

Fishing deeper water will become a thing to do in the coming month. A lot of the fish are trying to pull out away from the flats but each little cold snap we get brings them right back shallow. As soon as we are without fronts and the water temperature stays above or right at 70-75° the fish will become way more active and move to deeper, cooler water. Don’t forget about wade fishing sand flats during this time, though. You can experience some quite phenomenal bites throwing a big topwater wade fishing a shallow sand flat on an early morning in May. The warming of the water temperature will fire the fish into better feeding frenzies, ultimately showing themselves off by more slicks. Slick fishing can be great during May.

East Bay looks promising for a good May. Freshwater isn’t totally gone, but it’s nothing that we’re not used to for the last few years. Wading has been the ticket lately but with the push of fish headed out deep, drift fishing has been successful, too. Like I talked about above, timing is everything so try not to get too frustrated if they don’t light off as soon as you pull up to your spot, it’s been a waiting game. While wade fishing during the coming month, focus on sand bottoms with scattered shell. Topwater lures have been best but whenever the bait hasn’t been active, soft plastic lures such as a MirrOlure Provoker rigged on a 1/16 ounce jighead have been the way to go. If you can catch the water really clean, old school MirrOlure 51MRs are hard to beat this time of year as well.

May in East Bay is known for the reef fishing. Reefs can offer some easy drift fishing but can become overrun by flat billers. Remember to be courteous while fishing the reefs and try to keep a respectful distance from other fisherman, use your trolling motor once in the area of the reefs and try to refrain from firing up your big motor and blowing through the area where everyone else is going to drift.

West Bay has been consistent and still bringing in bigger catches from time to time. The fish are stacking up on sandier shorelines over grass and shell. We’re still seeing a lot of shad and the fish are feeding on them. Wade fishing has been best over sand and shell bottoms throwing topwaters. Once the topwater bite dies off, MirrOlure Provokers on 1/16 ounce heads have been dynamite. Redfish have been consistent in the marsh on Bagley spoons and paddletails. Flounder have been spotty but they are beginning to show on shallow sand flats around bayou drains.

Trinity Bay has been all but forgotten several years now with the all the river inflow this bay has been receiving over the recent past, but do not surprised to see her rising again to her former glory – so long as we do not get inundated again. Remember that timely rain and inflow is a good thing, but not the monumental floods that have become of a pattern. Once the wind gets right, and it should during May and early summer, I wouldn’t be surprised to see some solid drifting action on slicks out deep from the east shoreline and an occasional open-water school of reds.

Stay safe out there and always remember to enjoy your fishing!