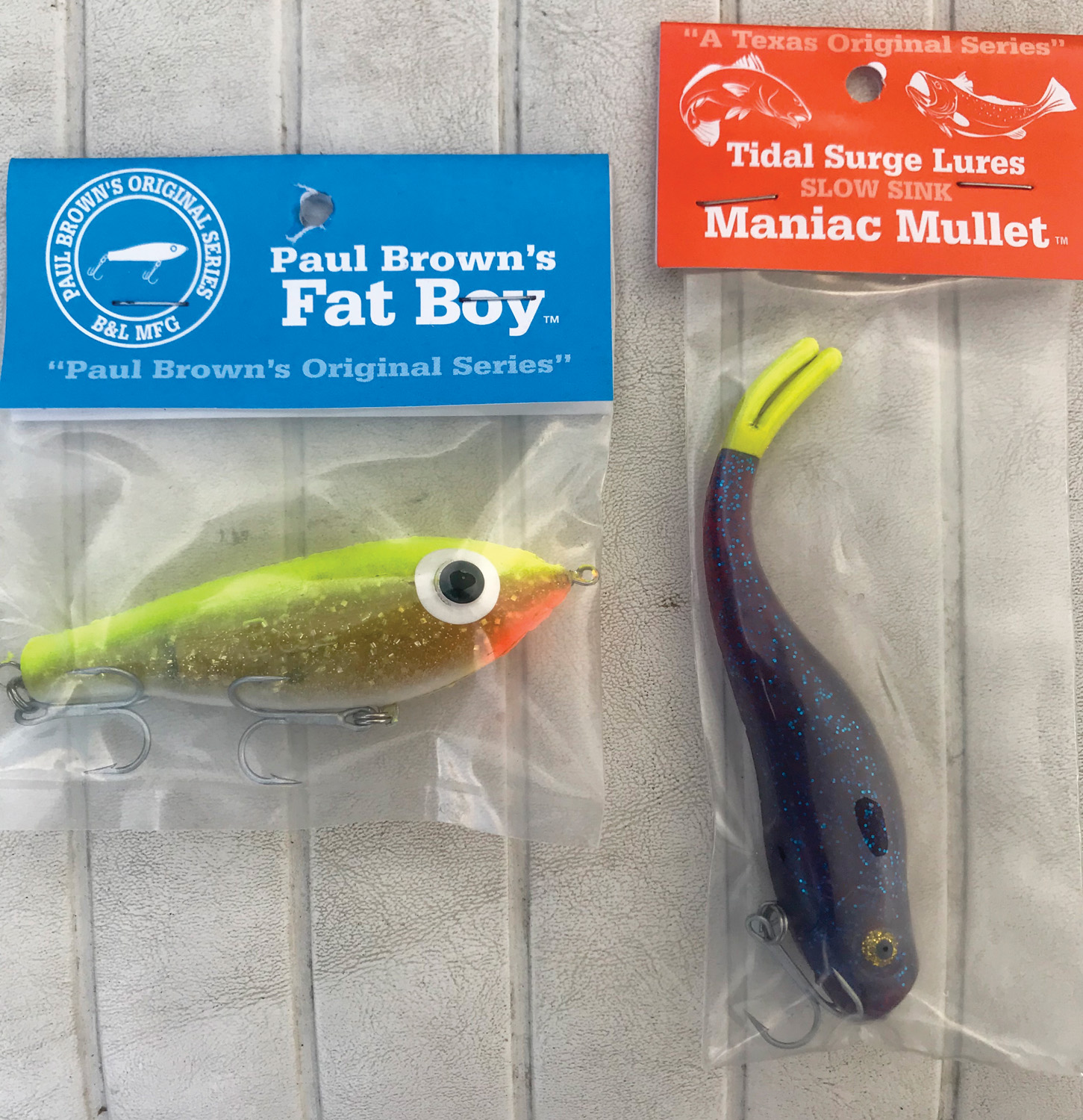 The Corky Fat Boy and Maniac Mullet are both excellent slow-sink/suspending lures.

The aftermath of Hurricane Harvey doesn’t seem to be as bad as we had originally thought. Being that we’ve never experienced such an event, it was hard to predict what would happen to the bay, especially after seeing all the devastation on land. I think that we expected to be thrown off course for a very long time, judging by the amount of water that came down the rivers. The San Jacinto and Trinity were at record flows and the dams were at record discharges. What saved us is that it came and left so quickly. Within five days, the Livingston Dam went from record discharge to a standstill. Essentially, it was just a giant flash flood. Judging by how quickly the bay is recovering, the flood didn’t completely inundate the entire water column in some areas, allowing for a quicker recovery.

Now, with that said, we did incur enormous inflow that will be detrimental to some types of habitat. Oysters cannot live in salinities less than 2 ppt for longer than a few days. We have to assume we lost nearly all of our oysters. The long-term effects of this are almost impossible to predict, but being that we still have a fall oyster spawn coming, we should see a great oyster spat set. It will just take time for the new oysters to grow.

Luckily, Mother Nature has blessed us with favorable conditions for a quick salinity rebound. First is wind, that will encourage evaporation of the fresh surface layer. Next is strong seasonal tides that will obviously help mix up the fresh water and bring in new salt water. We’ve also experienced exceptionally high tides recently due to other storm systems in the gulf, and predominantly easterly wind that always “bulls up” the tides. All of these factors play strongly in salinity recovery and I think we are on the road to recovery sooner than originally believed possible.

Fishing in November, generally, can be fabulous across the entire Galveston Bay Complex. Being that all of the fresh water isn’t gone yet, we will have to adjust some things from a typical November, but I believe that we will still have a decent fall season.

October is often thought to be the best month to target speckled trout, but October has been far from normal this year. With a great abundance of juvenile shad and white shrimp in the bays, the bite has been finicky. Hopefully, November’s cold fronts will fix some of that problem. I feel that as bait migrations reduce the amount of forage available we should begin to see fish more willing to take lures, and then it’s only a matter of unraveling the patterns.

As the availability of smaller forage is reduced with each passing cold front, larger finfish species, like mullet, will take their place as the primary forage species. Mullet imitators, Corkys and topwaters, seem to always work better as November approaches, at least for me.

Some believe topwaters are more effective in warmer months but November’s water temperatures are still very favorable on average for trout and redfish to feed on the surface, except maybe for a few days if we get an exceptionally cold norther coming through. I trust the presence of bait activity at or near the surface more than anything as a signal that topwaters might be effective.

When the mullet cannot be seen to be active at the surface is when I know it’s time to tie on a Corky. MirrOlure offers many different styles of these Paul Brown classics and each has its own niche. Most of us tend to use the Fat Boy more often and I feel that its deeper profile adds to its appeal. The Fat Boy also suspends better than most of the others in the Corky family. The suspending qualities are basically what allow covering the water column more thoroughly. The Maniac Mullet, now also made by MirrOlure, is another great suspending lure that can be worked effectively while drifting.

Drift fishing can also be a good tactic during November. Especially when the wind angle allows following the contour of drop-offs and ledges that cannot be waded.

West Bay should be great this fall, being that it was least effected by the flooding. South shoreline coves and mid-bay reefs should setup better with each front. East Galveston Bay looks promising with the amount of forage that’s already in the back of the bay towards the Anahuac Wildlife Refuge. Trinity isn’t completely out of the question yet, we just need a little time for the salinity to recover.