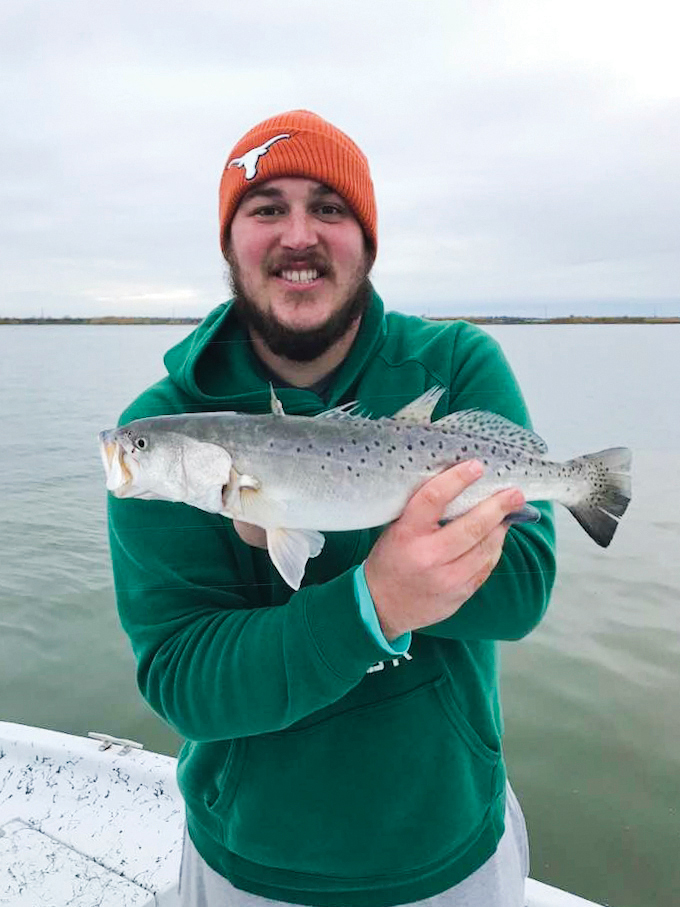 Cole Cooper picked up this November speck drifting along a drop-off with Capt. Thomas Francis.

November has long been known as a great month on the Galveston Bay System, so long as the cold fronts don’t interfere with our opportunities to be on the water. Lots of folks believe that fall patterns emerge and become established during October but we usually do not get enough frontal passages and cooler weather to make this happen until sometime in early-November. Once the water temperature stabilizes in the mid- to upper-60s is when the trout patterns become truly predictable.

So, the fishing this month will be quite weather dependent, which is a very simple tip, but there’s more to it. Mother Nature has lots of tricks up her sleeve and is known to throw a tantrum every now and then. So I offer you Cold Front 101: Before the front, everything eats. Immediately after the front, everything lays up.

Generally two days after the front you’ll get some lower barometric pressure rolling in and things will be back to normal. When the fronts hit and the barometric pressure soars, the fish will become almost dormant – at least in their feeding habits. If you’re fishing under a cloudless sky or when you hop in the water right after a front and you feel like you’ve been vacuum-sealed into your waders, you’re going to have to do some grinding to make the fish eat!

Fish, and basically all wildlife, are programmed by nature to gorge as a front approaches. When you know a front is approaching, find nervous mullet along any shoreline and throw your favorite lure right in amongst them, it’ll probably be good. But don’t expect much the day or two following the front, or at least until the barometer begins to settle again.

Come November, the greatest part of the year’s shrimp crop will already be out in the gulf. I’m not saying that in the beginning of the month you won’t find any bird activity in the northern stretches of the bays, but most of our Hop-A-Matics are gone. This will trigger the trout to prey almost entirely on finfish, especially mullet. Your mullet imitating plugs become one of the keys to consistent catching…enter the Corky family. Topwaters also become prime players in November as the water temperature is still very conducive for surface feeding. Some of my favorite November memories include topwaters getting absolutely crushed at daylight.

Often times we relate favorite fall fishing holes turning on when the first couple really strong fronts roll in. These areas, mostly in the northeast stretches of the bays, are primarily of softer bottom consistency, not hard sand. Mullet are again the culprit, as they feed on sediments and algae commonly stirred up from those softer bottoms. Any such area then begins to also attract lots of trout. As the fronts become more predictable and severe, the trout will linger around drop-offs or just inside the mouths of sloughs and bayous. These little hideouts make perfect havens for fish to drop into when the water gets blown out by the front, or when the water temps drop suddenly in the face of a chilly north wind.

The back of East Bay is almost always a good place to start your November days. If you draw a line from Marsh Point to Robinson’s Bayou, everything east of that line will be generally good, depending on tide levels. On a high tide, you want to be on the north shoreline right up against the grass. On lower tides you better be in front of a bayou on the south shore.

In Trinity, wading all along the north shoreline around Jack’s Pocket, Anahuac Pocket and the North Ridge can be good. Trinity is a great place to drift in the fall for the guys who don’t like to wade. The back of Trinity offers many different options with various bottom undulations, ledges and flats that will hold fish on varying tide levels. Covering lots of water can be a key in finding fish and drifting therefore becomes a solid option.

In West Bay, mid-bay shell such as Confederate, North Deer and Mechoms reefs will produce lots of fish. Some decent action will also be found in the coves along the south shoreline.

Further upstream around the San Jacinto in the Upper Galveston Bay region and along the ship channel, we can also expect some strong bites to develop. This deep water system will hold fish in late-fall and into winter given the diverse bottom structure of ledges and other features that create excellent ambush feeding points.

Be safe and enjoy your fishing…keep only what you need for a meal or two!