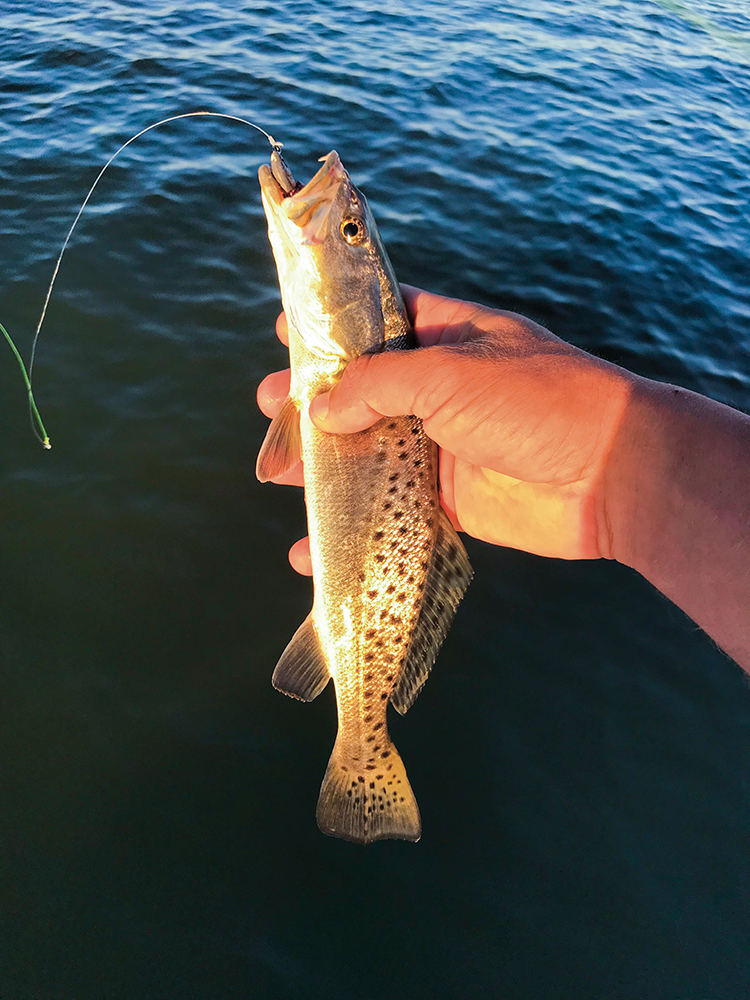 Hundreds of trout this size are a good indication that recruitment is currently strong but it’s going to take year or two for them to grow up.

Many anglers say October is their favorite month on the Galveston Bay Complex, and for good reason. Everybody is by now sick to death of baking in 100° heat every day and, even though the fishing hasn’t been terrible during the heat of the summer, it sure will be nice to get a couple nice cool fronts to knock the temperature and humidity down.

Long days on the water will be less of a physical strain and the different patterns that will start to develop will enable many different techniques to be included in our daily fishing plans. Those boat rides in the morning with a light jacket and crisp air behind a front can’t come soon enough. The bird action will be in full swing and schools of fish will be staged over deeper structure as well as finding their seasonal home on flats and shorelines. You can’t beat fall fishing!

Like I talked about last month, the fall transition is already happening and the fish are starting to spread out as cooler water temperatures change the patterns of primary forage species. When the first strong northers hit and the shrimp really start dumping out of the bayous and marshes, the fish will congregate into tighter schools, staging near and feeding on the easy morsels.

That’s when the bird action will really shift into high gear. Everyone thinks of October as the traditional month for working birds but in all reality, fishing under actively feeding birds can be a player essentially from April all the way through early December. When October hits, the birds don’t just magically know it’s time to rock n roll. They are highly-opportunistic in their feeding habits all year.

Trout and redfish (and other species) are players in this. They find the migrating shrimp and their feeding activity pushes the shrimp to the surface. Sharp-eyed gulls and terns see the shrimp skipping on the surface to escape hungry fish. And then, as they say, it’s on like Donkey Kong!

October will bring wadefishing back into our game plans. With the fish spreading out and following the forage migrations, you can bet it won’t be too long until they are staging along shorelines all across the Galveston Complex. Wadefishing in and around the south shoreline coves of West Bay will come back into play, as will the shorelines toward the back of East Galveston Bay. Typically, there will be a lot of small schoolies along the banks first so you might have to weed through dinks until to find decent keepers but that’s been the norm this year across the whole system. We are seeing encouraging numbers of fish right now but most of them are babies. TPWD should be pleased with the recruitment side of the trout equation but the 5- and- 7-pounders we used to catch have become rather rare.

Trinity Bay is where many fishermen will be headed when looking for bird action, from the HL&P Spillway northeasterly toward the mouth of the Trinity River. Flocks of feeding birds are usually quite abundant all along the west shoreline, as well as the area around Fisher’s Reef and Dow Reef. The back of East Galveston Bay will be loaded with birds as well from Frozen Point all the way to Moody’s. You just need to be able to find a school of fish that are bigger than your lure. West Bay should offer some bird action around the mouth of Green’s Cut and toward Chocolate.

The drift fishing on the oyster reefs in East Bay will begin to slowly dwindle away as each cold snap comes but this will result in better fishing on the shorelines. In Trinity Bay, the fish will likely stay on some of the wells for the greater part of October but, come November, they’ll most likely all be in the back. Although we don’t seem to have the general biomasses of schooling trout that we once had to create historic appearances of slicks, it’d still be a good idea to make some loops around the mouth of the Trinity River and Anahuac Pocket just to check it out. The fishing in the Upper Galveston Bay region toward the San Jacinto River will get better and better with each front. The Burnett/Scotts/Tabbs Bays region can be substantially good come fall and offer protection from the wind when Mother Nature isn’t on our side.

Enjoy your fishing and try to learn something on each outing. Keep only what you need for dinner and let ‘em go when you can!