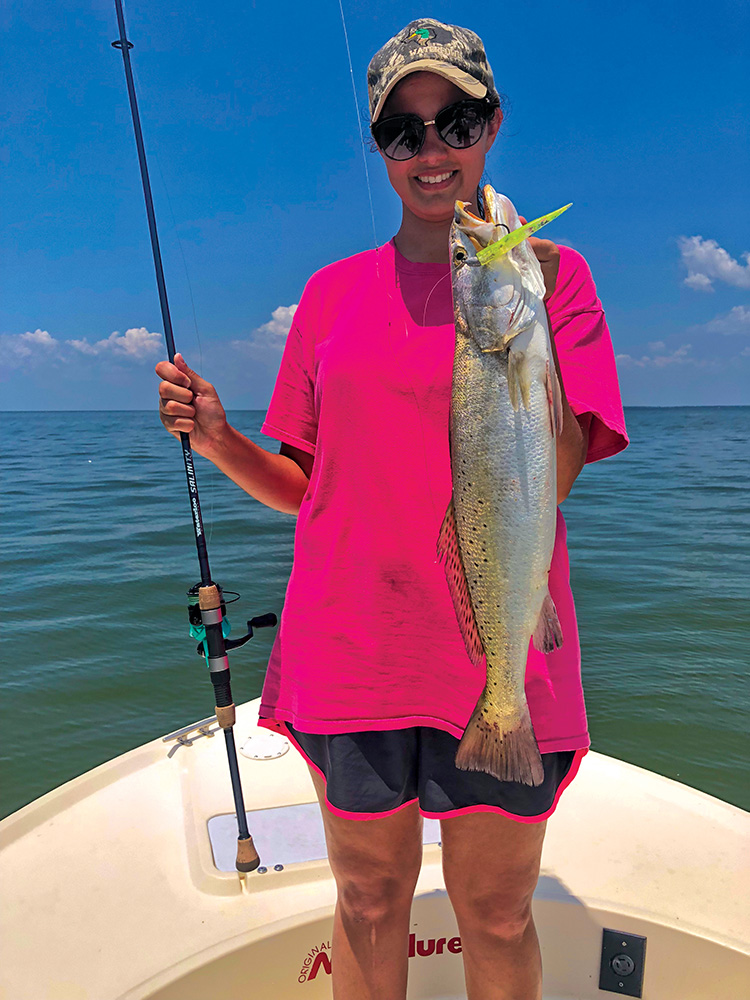 Every once in a while we pop a good one; like this trout that ate a MirrOlure Lil John.

We hear fishermen talking about transitions quite often. In a nutshell, a transition is a period of change, usually seasonal, that affects water temperatures, depths, and structure types that fish will relate to for prolonged periods. Transition of game fish (migrations) can sometimes also be traced to availability of primary forage sources.

September is generally recognized as a transition month on the Galveston Bay System. When the fall transition begins, things will start to get mixed up a bit, the same as we see during the spring transition. It happens with the arrival of the first cool fronts, the effects of which are amplified by steadily decreasing hours of daylight in the fall – shorter days alone will bring cooler water temperatures.

It’s not that the fish have somehow pulled a disappearing act. I see it as the schools becoming strung out, less concentrated, some are moving with the food and some continue to linger where they’ve been all summer. The challenge for fishermen becomes one of where are they headed, when will they begin to school back together, where and how can we find them in the interim.

Once the fall patterns become stable, later in the month toward October, these fish will stage back up together and be easier to target. All the patterns so far this year seem to be running a few weeks to a month late in developing, so please forgive me if it doesn’t happen exactly as I have predicted.

As I’ve been saying right along, we’ve had a tougher than normal year for trout across much of the Galveston Bay System and it remains below par here in late summer. While I believe we have fewer fish in general within the three, four and five year-old age classes, and there is also less suitable habitat available than say 10 years ago before Ike, and we have other variables working against us.

Never in my experience have I seen such an explosion in the shad population. Everywhere you look you find schools and rafts of shad of all sizes – from the size of a dime to nearly as big as your hand. Trout don’t have to look beyond their nose for a meal, so how willing should you realistically expect them to be when you offer a plastic imitation? They say hurricanes and the floods they create greatly enrich the estuaries. Looks as though Harvey did a bang up job – shad-wise anyway.

Believe it or not, there are reports circulating that tankers in the Houston Ship Channel have been fighting overheating issues from clogged cooling water intakes. You guessed it…too many shad!

Shad have a marked preference for the upper portion of the water column. Here lately we are seeing trout and redfish schools staging very near the surface. Just the other day we had a boat within sight throwing live croakers with little success while we had it going on pretty good with soft plastics. How could that be?

My guess is that the game fish had all been chummed into the upper two feet of the water column to take advantage of the shad explosion. Poor guys slinging croaks a couple hundred yards away were only drowning bait on bottom – nothing down there to eat them, while the trout were hitting our lures before we could even engage the reels after the cast.

Let’s talk about tides for a second. As most of you already know, tide movement can sometimes be the most powerful trigger to get a good bite going. I hear people say, “Wow, we have an amazing tide tomorrow, it’s going to be screaming in (or out) all day!”

Well, current can be definitely be a good thing, but that’s about the worst tide you can experience in the deeper waters of Galveston Bay.

Trout are opportunistic feeders and like to have their food delivered by current, but they’re not accustomed to fighting raging currents all day and probably won’t be anxious to feed when there is no structure available to block the current and provide ambush points.

Shorelines are different. On a shoreline or in a shallow bay, a steady strong tide all day might be something you want, but not in deep water. Picture yourself on a treadmill and someone offers you a hamburger. You’d likely say, “Not right now. Let me get off this thing and rest a bit and I might eat.” In deep, open water we typically find a better bite when the water is just beginning to move.

Remember to fish smart and conservatively. Keep only what you need for a nice meal and release the rest. Dead fish photos aren’t nearly as cool as they used to be.