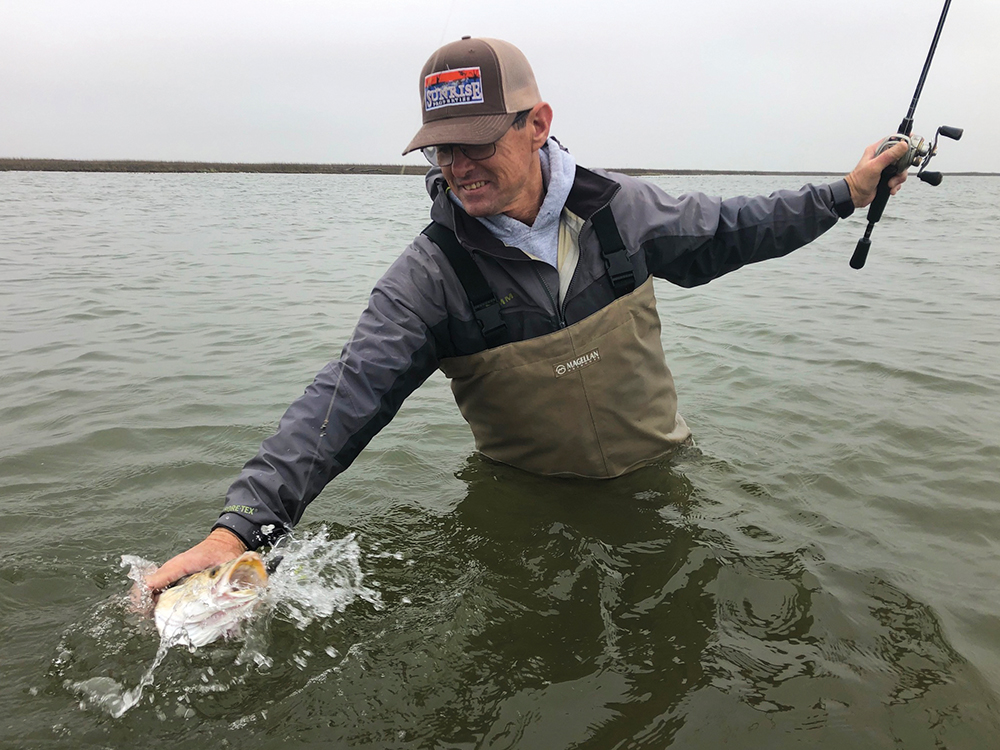 Where we fish in April is determined daily by changing winds and water temps. If winds blow harder than 20 knots, we roll to the back lakes in West Bay and work redfish. If winds are more friendly, we work the middle of East Bay for springtime speckled trout.

I have caught some heart-pounders on the edge of East Matagorda Bay on an incoming tide. Those big trout stage in the deep water just waiting for a swollen tide and rafts of mullet to pour over adjacent mud flats littered with shell.

Our bays are in awesome shape. Wade a back lake and there are little shrimp everywhere. Wade a bayou and watch all the little crabs scurry away. When the bottom of the food chain thrives, the top of the chain thrives. Our catches in Matagorda prove it.

Our winter fishing was great this year. March was just as good. Fish were where they were supposed to be and in good numbers. That's why I am so optimistic for April.

The question that pops up every April is, “When will the glass minnows show up?” Glass minnows are really just bay anchovies - little white, silver flashes that swim in herds that get swarmed by hundreds of brown pelicans, trout, and redfish. When the fish go off and gorge on the big balls of minnows along the south shoreline of West Bay it is a sight to behold. I have had redfish swim between my legs blowing minnows out of the water and happy trout literally jumping out of the water just a few feet away.

Some of the best wading happens on the afternoon incoming tide. Get a good night's rest, get up, read the paper, eat a little breakfast, and head out. Take your time and wait for the tide to usher the minnows to the grassy shorelines of West Bay. We like to throw Down South Lures, Bass Assassins and MirrOlure Lil Johns. Topwaters are a blast as well with Super Spook Jrs. and She Pups getting the nod most often on light tackle.

Redfish along the north shoreline of West Bay should be a mainstay. As tides rise reds hang around the reefs and tight against the grass trying to root out small shrimp. Back lakes like Oyster and Crab lakes are go-to spots for anglers tossing live shrimp under a Mid-Coast popping cork.

Never overlook the north shoreline of Palacios including Turtle and Tres Palacios bays. There are piles of shell along the shoreline that hold all kinds of fish in April.

April kicks off another 26 weeks of the Texas Insider Fishing Report on Fox Sports Southwest. I will give the weekly Middle Coast Report and highlight the coast from Freeport to Port Aransas.