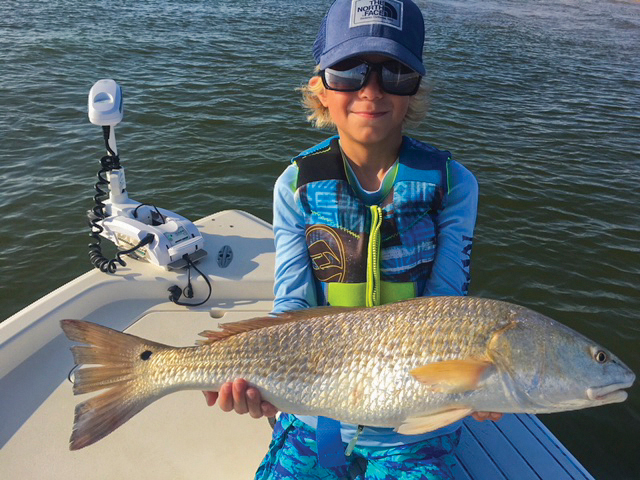 Normally we talk about August being so hot you can hardly stand it. However, since June and July were about the hottest I can remember, August is likely to be little more than business as usual.

With tough winds so far this summer we haven’t had the chance to get on the beach. We are hoping August will change that, being that August is known for its mostly calm, balmy days.

We regularly catch 4-to 7-pound trout in the surf on topwaters, MirrOlures and soft plastics. If you use live bait it can be pretty quick limits on live shrimp, and even quicker on live croakers.

We are hoping for higher tides to pump new water into our bays from the low tides of July and June. That extra foot of water pushes trout right on the beach. I mean, you can literally cast from the beach and never get your feet wet and catch fish – like bank-fishing a bass pond.

I feed them topwaters. Few blowups rival a surf-trout banging a plug and it seems the best bites have come on chrome MirrOlure She Dogs and She Pups. Those baits are just bigger and noisier and I think the fish locate them amid all the gobs and gobs of menhaden, mullet and shrimp. Those Gulf fish are just wired different – they have to be – they are not on top of the food chain like their relatives in the bays.

It seems the bigger the trout, the more the sharks show up. You can try and reel fast and horse the fish to the boat, but a five-pounder with waves breaking on the end of a light graphite rod cannot be rushed.

The guys in the far west reaches of West Matagorda Bay near Port O'Connor should enjoy the same action. Many are heading south out of Pass Cavallo and fishing the Darlington shipwreck and some are hanging around the jetty and walking the rocks and tossing She Dogs, Skitter Walks and Super Spooks.

East Matagorda Bay finally fired up in July and waders caught fish in unexpected places due to low tides. July is synonymous with low tides but I cannot remember a June with lower tides.

We had to hunt trout in hot, dirty water, making for some frustrating days; however, when enough captains get together, share knowledge and work hard to find fish, good things happen. If we can ever put a week’s worth of good weather together I think you will see some amazing catches in East Bay.

As far as redfish go, we are hoping for another shot in the arm like last summer when tides bloated due to low pressure in the Gulf and pumped another two feet of water into the bays and back lakes.

There are lots of redfish in the surf. Most of the fish are right on the beach in the first gut. Those able to make a long cast from the boat have nailed limits on live shrimp. The Surfside, Matagorda and Port O'Connor jetty are holding large numbers on pogies and table shrimp.

Back lake areas in Matagorda, like Oyster Lake, Crab Lake and Lake Austin are good, as are the far east end of West Bay where the Diversion Channel dumps into the bay.

Waders along the West Matagorda Bay shoreline are catching reds right off the grass line on live croakers, shrimp and Gulps. Don't be surprised to find redfish under birds along the shorelines on calm days.

While you are wiping sweat from your forehead, don’t forget we will be shooting blue-winged teal in little more than a month. In fact, the first migration of blue-wings should show by the end of August. The season runs Sept.15-30 and we will be hunting the morning and fishing the afternoons.