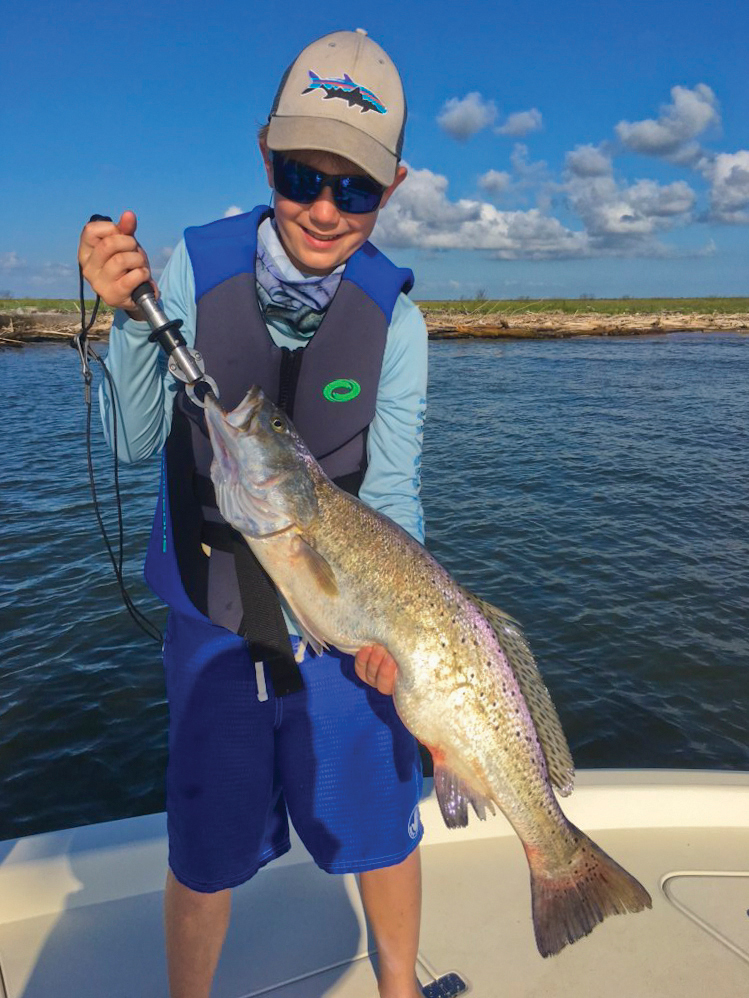 There is really no reason to talk about the heat. It's hot and it's always going to be hot in July.

West winds push dry, blistering air off the Mexican desert and give us arid days while sucking water out of the bays and draining tides from the shorelines. June tides were the lowest I have ever experienced in twenty Junes on the job.

Deal with it and use it to your advantage. Those low tides congregate fish in guts. All those redfish that have been hanging out tight to the shorelines are now schooling in the middle of East Bay. If you see a slick, you better fish it. Often we catch more reds than trout while drifting 4-5 feet of water.

Pick and choose your times to fish. Know when water is coming or going. While wading, I like to be somewhere around the pass or jetty. Tides are going to be strongest around the pass. I like to work the grassbeds within sight of Port O'Connor. Fish there love a Super Spook Jr. or She Pup and plastics like Bass Assassins, Down South Lures and MirrOlure Soft Dines.

Since July is synonymous with westerly wind, water clarity can become an issue. Trout and redfish continue to eat in off-colored water - you just might have to throw live shrimp at them.

If we can find streaky water, meaning generally off-colored water with hints of green streaks, we feel like we can find fish to catch.

Like every July, we prayerfully await light north winds and a flat, green surf. It makes you forget instantly about all that searing southwest you had in your face the day before. One of the most attractive aspects of Matagorda is the miles of beach available to anyone with a 4x4; and, it's some of the best fishing of the year.

We have had some incredible days while drifting and wading the beach. We enjoyed the gulf surf water the earliest I can remember with good catches in late April; and, we also were blessed with a few days in May. We caught redfish in the first gut, trout at the jetty and a scattering of small snook.

It's important to try and fish the surf the first day it greens and flattens. It's been my observation that by third day of a green surf the trout get tougher to catch. Predators like sharks, mackerel, huge redfish and tarpon find the clear shallows and try to find an easy meal and the trout seem to exit.

When wading, we throw small Super Spooks and She Pups on the incoming tide and expect a crash. Later in the morning, we ease to deeper water and toss Chicken on a Chain Bass Assassin Sea Shad and white ice Down South Lures.

We have had a problem with sharks in West Bay this year. That's not to scare you, just to make you aware. Sharks are a trustworthy barometer of how many fish are on a sand and grass flat; and, there have been a lot of trout on the shorelines the past two months.

Most seasoned waders know using the traditional 15-25 feet of nylon cord with a float attached is asking for trouble in West Bay. We use them fall, winter and spring or until the first signs of sharks appear, then break out the five-gallon buckets.

Sure, cord-like stringers are much lighter, easier and maneuverable; nevertheless, if you wade West Bay from now until October and plan on catching fish and putting them on a stringer, plan to increase your odds of shaking hands with a shark.