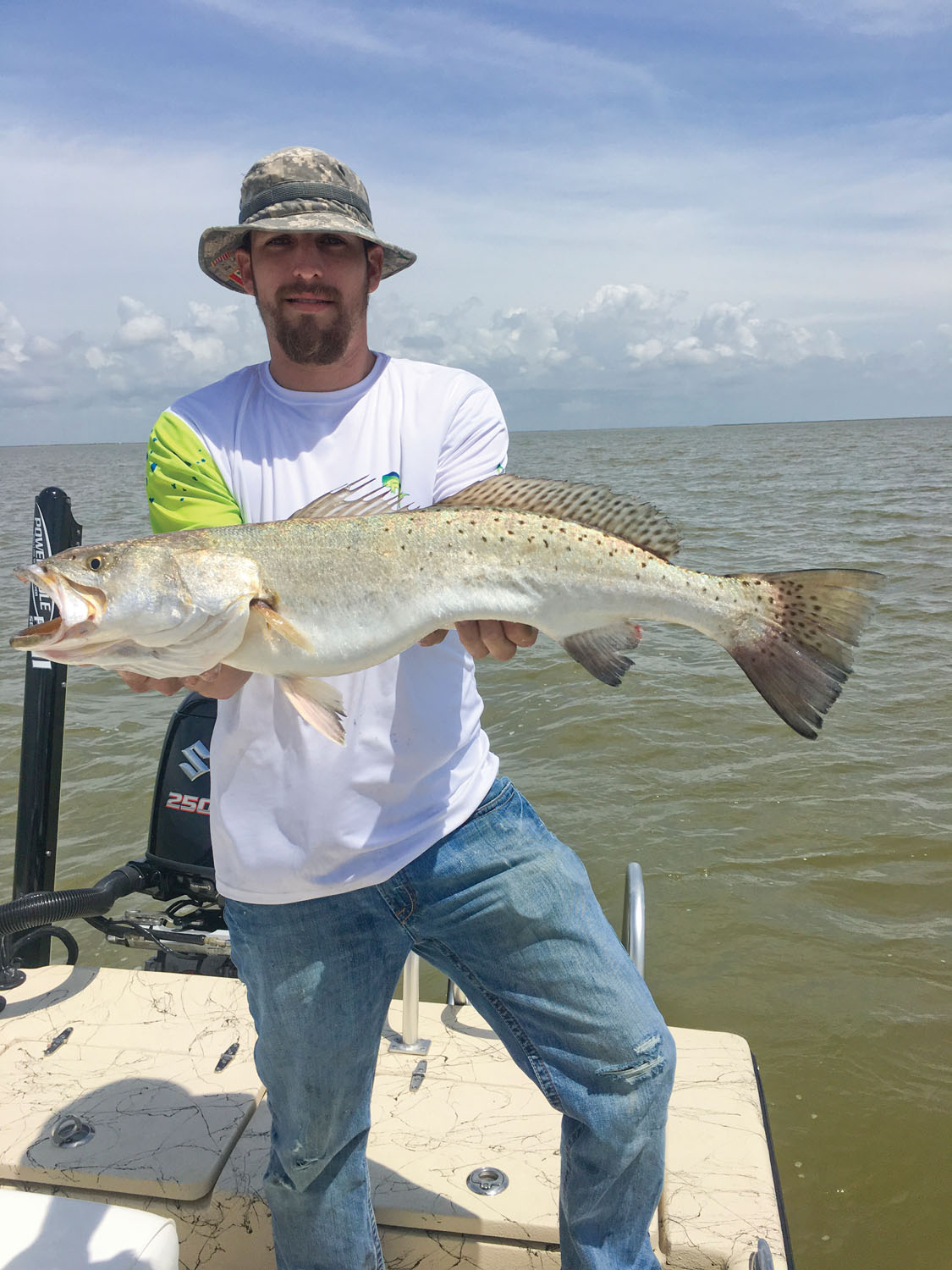 I really think June is my favorite fishing month. Everyone is so excited to be on the water and smiles abound with the whole summer in front of us. Trout, reds, surf, bay, Gulf of Mexico - all are players in June.

For some reason, fish "slick" in June more than any month I can remember. Few things are better for a wader than catching heavy trout on topwaters while the sweet, fruity aroma of multiple slicks pop in every direction.

That's when you know you are "really" in them.

When wading, we focus on the grass beds during summer. Most of this terrain can be found along barrier island shorelines in the lee of southerly winds, and stay fishably clean even when flags are starched. Our best grass beds are in West Matagorda Bay. June normally affords ardent morning incoming tides, perfect for walking a She Pup or Super Spook Jr. over the flats.

But, clear water isn't always where the fish are. Most of the time there is a dingy section of a flat and that's where most of the fish will be. Waters get too clear at times to catch fish.

I love fishing flats adjacent to the Port O'Connor jetty and Pass Cavallo. The best tides in the bay occur there and we toss topwaters, Bass Assassins, Down South Lures and MirrOlure Soft-dines in some of the most beautiful water you will ever wade.

I know it is a broken record, but our bays are in the best shape I have seen in over a decade. There seems to be fish everywhere. Sure, we have our tough days – fish don't bite every day.

However, the sheer number of speckled trout and the quality and size is impressive.

Credit should be given to our attitudes about taking care of fish and not taking more than we need. The 5-fish limit, though it is tough to measure, although it has to help. Our wet weather the past three years is also a boon. The power of freshwater is like a B-12 shot in the arm of our bays.

Back to June fishing – the surf normally gives us a few days to fish in June and there is nothing better than watching a plug get crunched in the foam. We wade the first gut on an incoming tide, but choose to drift out of the boat when tides are falling so we can safely fish the outer bars with MirrOlures, topwaters and soft plastics.

With light winds, all of East Bay is in play, including mid-bay reefs. Few bays in Texas rival East Matty for its potential to grow large trout; and, more big trout have been caught and released in 2017 than I can remember. I tell my Cajun buddies from Hackberry that our bay is a lot like Big Lake 15 years ago, when seven-pound trout were cheap.

Tune in to Fox Sports Southwest for the Texas Insider Fishing Report Thursday-Saturday for up-to-date reports along the coast. Follow the show along with my daily reports on Instagram and Facebook.