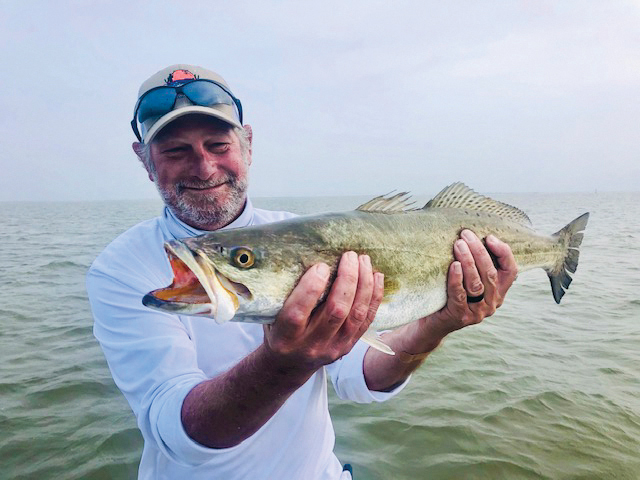 It’s a plugger’s dream to work a topwater in an emerald surf, hearing every ball-bearing click as it dances left and right.

It’s June and the surf is only a light north wind away.

Hopping shrimp and flipping mullet are strong indicators of fishy locales, so are wheeling seagulls and diving pelicans. Speckled trout are ambush-feeders and like to use structure to flush prey from structure. The only structures on the beach, short of a sunken shrimp boat, are the guts and sandbars that run parallel to the shore.

Breaking waves tell you where bars are located. The swells build in the deeper guts and crest on the shallower bars.

Know the tides before you take the plunge. You are wasting your time fishing the first gut at the end of the outgoing tide. Likewise, you are probably stepping over fish to get to the second bar at high tide.

Though wading the surf is a welcomed rite of summer, anglers should always take precautions before diving into the ocean. Too many anglers die needlessly every summer due to neglect and/or disrespect for the foam. Tales of pluggers tiptoeing and even swimming to reach the third bar make me cringe.

Riptides most often occur on a falling tide; and most waders fall victim to rips because tides are receding and anglers must fish the outer bars in deeper water. Best advice is to use common sense – if currents and tides are too strong, get out of the pool. No fish is worth a life.

Beside the safety factor, there is an advantage in fishing the Gulf from a boat, especially on an outgoing tide. Drifting allows you to cover more ground and work deeper water that could not be reached on foot.

The surf is not the only spot we will frequent in June. East Matagorda Bay continues to produce beautiful trout during the first month of summer. There was one 10-day stretch in April where my boat released at least one trout over six pounds every day.

It’s a testament to conservation and respect of our resource. Most anglers are releasing big trout and doing what they can to leave this precious resource better than they found it. Quite a change from yesteryear.

Better June tides will allow us to wade the sand and grass in West Bay. The morning incoming is best for feisty specks on Super Spook Jrs and She Pups. Grassbeds in West Bay are best in June as slicks point the way to feeding fish.

We like throwing Down South Lures, MirrOlure Lil’ Johns and Bass Assassin Sea Shads. The new Texas Custom Lures jigheads are wonderful. The weights are true to scale and the way the head skirts over reefs and shell pads makes for more strikes and fewer hang-ups.

The offshore game gets rolling June 1st with the opening of recreational red snapper season. The federal season is set for 63 days this year with a 2-fish, 16-inch minimum bag limit.

June has always been one of my favorite months to fish. Let’s get outside and get this country rolling again.