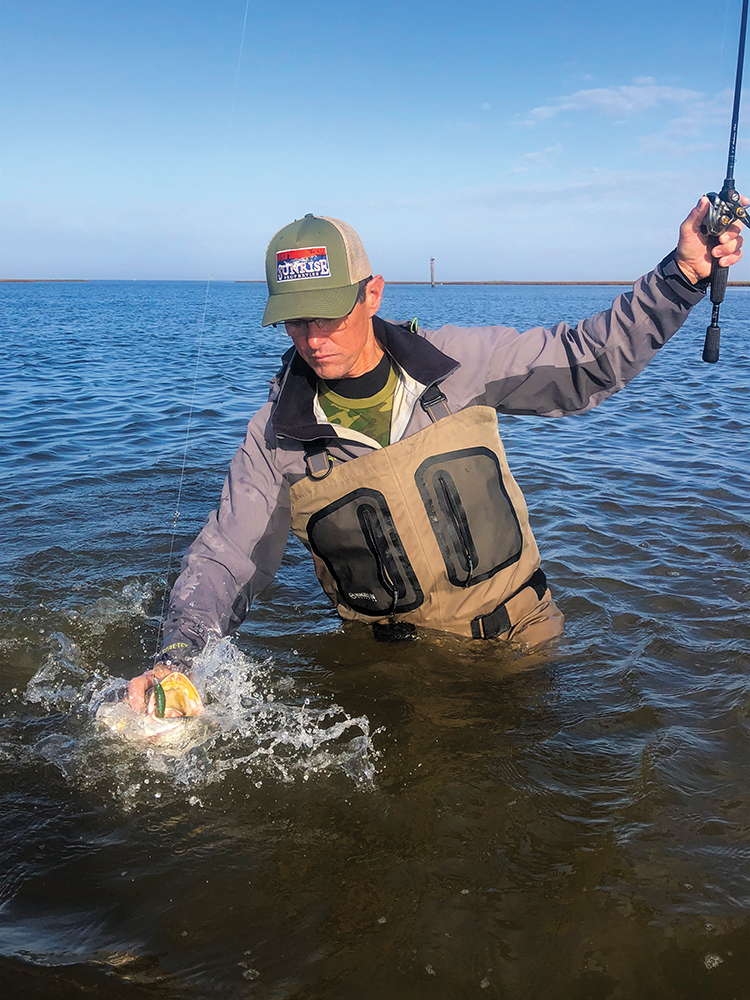 As I write this in early February I am wearing short sleeves and shorts. This morning I made a prosperous wade in water that checked 62° and even gave a topwater a whirl. However, the better choice was a MirrOlure Soft-Dine while my buddy Capt. Ray Sexton tossed a Magic Grass Down South Lure. It was a good morning.

Punxsutawney Phil says winter is almost over and that’s fine by me. I even saw the first green buds on branches today; and, trees don’t lie. Hopefully March jumpstarts the official spring fishing season.

Don’t despair when a cool wave of air rolls through the region. There will still be some cold fronts in March; we usually get at least one or two in April, too. So revert back to winter fishing strategies when the north wind blows the tide out. Move to the mouths of the sloughs that drain the lakes. The water and bait will be pouring out of the marshes and lake systems and the fish ride with the tide and bait. Camp out and wait for the redfish to come through.

Redfish are usually everywhere. Spots like Lake Austin, Oyster Lake, Crab Lake and Boggy are great March hideouts. Make long drifts with live shrimp under a popping cork, or anchor on reefs. The cool thing is we can still catch fish when the wind blows really hard.

Redfish are not the only drum in abundance in March, juvenile black drum, the eating kind, frequent reefs in West Matagorda Bay. Twin Islands, Shell Island and Oyster Lake are all proven drum haunts in March. Live shrimp under a popping cork is usually the best bet. They are also known to take a slow-rolled paddletail plastic when they’re feeding heavily.

Over-sized black drum, those over 30 inches, are the spawners and are catch-and-release only to protect the breeding stock, but that doesn’t mean they are any less fun to catch. Big black bruisers frequent the channels, rivers and jetties leading to the Gulf, and a cracked blue crab is the most popular offering.

Regardless of the weather, we will still be chasing speckled trout and redfish along the deep shell and mud of East Bay. January was stellar and February is off to a great start for drifting with Down South Lures, Bass Assassins, Gamblers and Hogies. Some days the fish want the swimming paddletail of the Sea Shad, while other days they want the traditional 5-inch Bass Assassin rattails.

Make no mistake, we expect to catch some heavy trout in March while wading and drifting. You would be surprised how many big trout we release in East Matagorda Bay while jigging soft plastics out of the boat.

We never discount West Matagorda Bay this time of year. Trout hang on the edges of the guts and sloughs and we gingerly wade these areas with plastics and Corkys. West Bay's grass shorelines hold fishable water when spring blusters blow; and, depending how mild March becomes, the first signs of glass minnows could show right around Spring Break.

Spring Break in Matagorda comes alive with lots of families spending time together on the water and on the beach. We will run both morning and afternoon trips and we are kid and family friendly.

We will be at the Houston Fishing Show, March 6-10 at the George R. Brown Convention Center. Come by and see all the Sunrise Lodge gang and say hello.