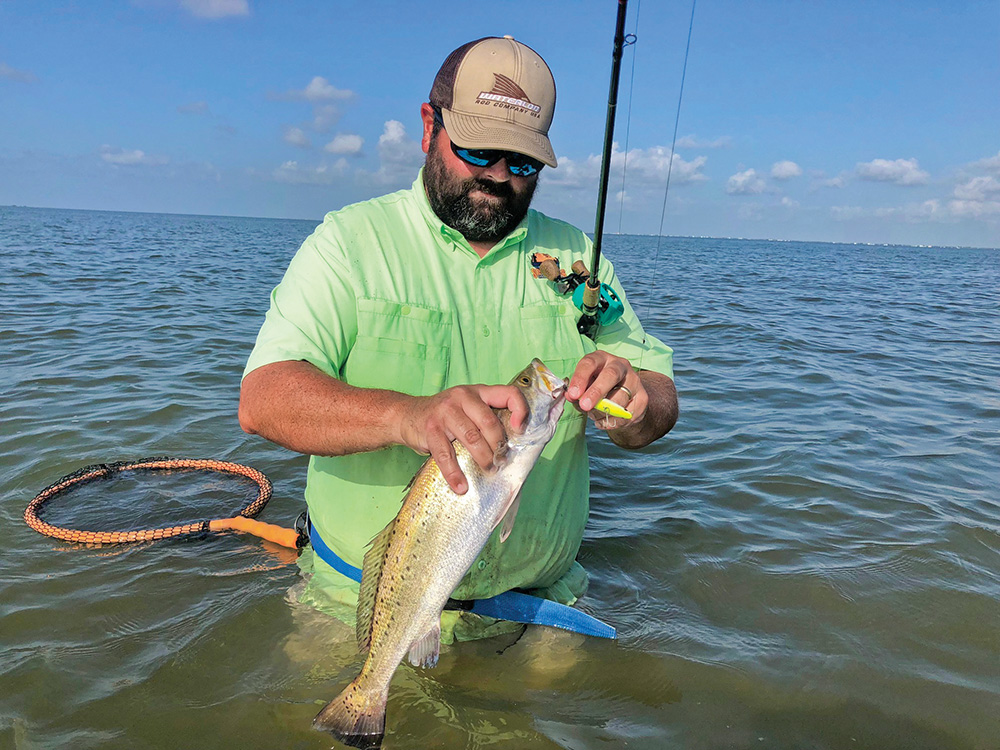 Light north wind in late summer means two things – the surf is flat and hunting season will soon be upon us.

The Gulf surf gave us great catches in July and August; and, though many anglers discount the surf in September, those same trout we caught in August are still in the first gut in September (along with a few more redfish).

Boaters tossed baits in the first gut at daylight, but those willing to brave the heat really worked on trout around midday as tides receded and trout eased off the beach and staged on the edge of the second gut in about five feet of water.

When the surf produces, so does the bay; and, often boat traffic is light because so many anglers are out in the surf. There are some days when the surf is hot that the bays are nearly devoid of boats.

Most trout this summer in the surf were caught by waders tossing croakers, but the good ole artificial guys still duped a few big girls on Super Spooks, Bass Assassins and Down South Lures.

The south shoreline of West Matagorda Bay has been up and down. Sand and grass flats closer to the Port O'Connor jetty and Pass Cavallo are traditionally good this month on She Pups, Super Spook Jrs. and Down South Lures.

Fishing from the boat, never discount Half-Moon Reef in West Bay as it has been on fire all summer while drifting with live shrimp under a popping cork.

Redfish guides in Matagorda know things get tough when water temps reach the upper 80s and tides fall 1-2 feet below normal during the summer. Redfishing was tough all summer, but that should change in September. Hopefully it will happen on the bloated tides we have been waiting for since April. Swelling tides offer more real estate for redfish and allow all captains a chance to float the backwaters where autumn redfish love to roam.

The best pattern this summer for redfish has been drifting in the middle of East Matagorda Bay. All those redfish on the south shoreline had no choice but to fall to the deeper shell in the middle of the bay.

The jetty should be great for reds in September. Most of the fish are near the bottom and best caught on live baits such as finger mullet, croaker and large table shrimp.

Please allow me to switch gears and address an issue that really bothers me. I have witnessed a large number of trophy trout brought to the cleaning table this summer, more so than any other summer I can remember.

East Matagorda Bay is a special place with lots of very big speckled trout. We work all year to protect this estuary by taking care of our large trout only to annually endure the summer tournament season that kills so many sow specks.

So, I am asking all anglers to take a deep breath and think again before tossing a big trout in the cooler. Is killing a big trout worth a little tournament change, a plague or a Facebook post?

This is not an anti-croaker or anti-tournament rant - just a plea for a careful attitude for our special big trout resource we call East Matagorda Bay.

Our editor, Everett Johnson, is all about conservation, preaching “Just Keep 5” long before it became a law. Let him know what you think. Always err on the side of conservation. We can’t continue to take, take, take and expect the bay to give, give, give.