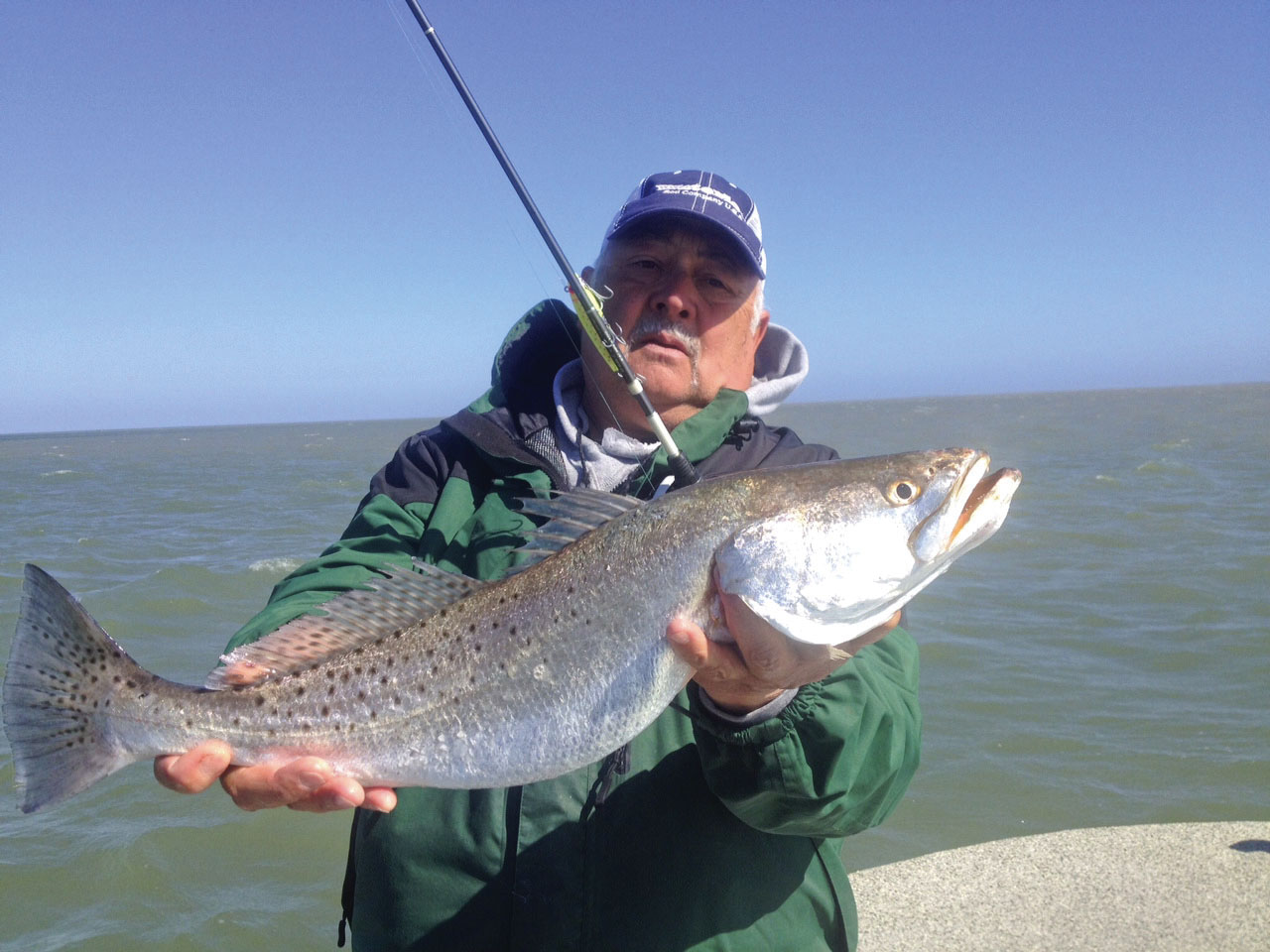 Crystal Beach on Bolivar Peninsula was a rendezvous point for hundreds of teenagers in the late-80s. Armed with pearl and red-tailed tandem-rigged Lil' Fishies, my buddies and I shouldered next to a dozen other anglers wading the edge of Rollover Pass. When it was good, two or three of us would have a fish on at the same time; when it was great a half-dozen would be bowed up simultaneously.

It was the blue-eyed blondes hanging from the roll bars of Jeeps that first brought us thereit was hungry speckled trout riding the tides that kept us coming back long after adolescence.

Water temperatures, tide levels, photosynthetic periods, moon phases, baitfish activity and many other undetermined variables determine when and where to cast in April.

When tides are bloated speckled trout are scattered along shallow flats in knee to waist-deep water, often as tight as they can maneuver against a shoreline. Why? That's probably where a candy bar-sized mullet will be.

Great spots are back lakes or extended bayous that run to secluded marsh ponds and undulating sand and grass flats. That's the south shoreline of West Matagorda Bay.
Another solid locale is the edge of the Intracoastal Waterway. The ICW extends from Sabine to South Padre and runs laterally along some of the most prolific speckled trout estuaries in the Lone Star State.

I have caught some heart-pounders on the edge of East Matagorda Bay on an incoming tide. Those big trout stage in the deep water just waiting for a swollen tide and rafts of mullet to pour over adjacent mud flats littered with shell. That happens in April.

To say I enjoy firing a topwater plug as far as my reel will allow is like saying my retriever enjoys running down a pintail drake. Though I have often been accused of trying to force-feed a She Pup or Super Spook Jr. to stubborn specks, real-world-fishing teaches me that trout sometimes don't want my prancing plug.

The wisdom my graying head brings prompts me to stuff a pack or two of Bass Assassins in my front pocket in case the fish are eluding the surface. Let's be honest, not everyone was made to throw a topwater. Lure-makers would have you believe walking-the-dog is like walking a dog, but the fact of the matter is it takes a lot of practice, patience and a hint of pragmatism. That goes for any angler, no matter their level of prowess.

Where we fish in April is determined daily by changing winds and water temps. If winds blow over 20 knots, we roll to the back lakes in West Bay and work redfish. If winds are lighter, we work the middle of East Bay for springtime speckled trout.

Here's hoping I have at least another day like that under my belt this month.