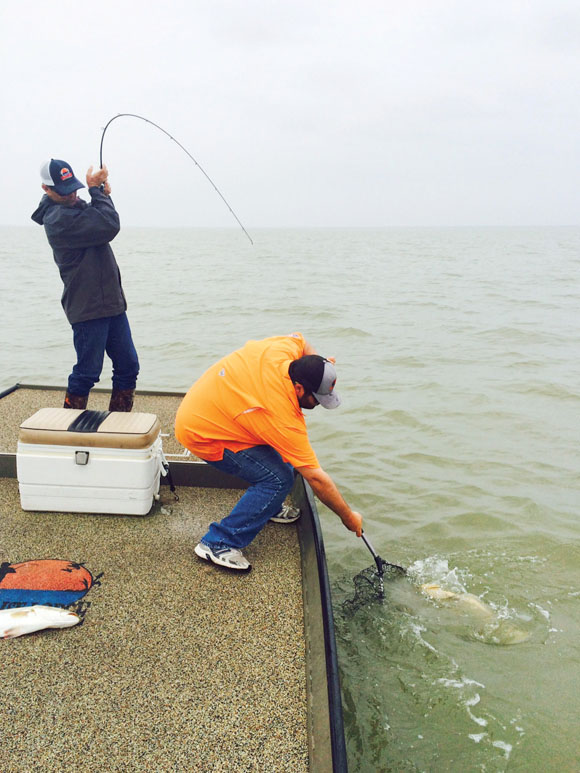 In the "good ol' days" fishers wanted to catch a big trout and didn't mind wading for hours for the big bite. Now, time is more precious. The texting generation has lost patience. It's about let's go out for a good time, catch a few fish, then get back to the dock so we/they can return emails and make a few calls.

Change is a hard pill to swallow for a salty captain; however, a new version of customers has emerged, so I acquiesce.

The first five years I owned my boat, I never knew if my live well even worked. Now, in my home waters of Matagorda, beginning in April, I rarely leave the dock without at least a quart of live shrimp ready to be rigged under a popping cork, unless of course my charter is arranged to solely throw lures.

My favorite method of fishing from the boat for trout is drifting. Pick a piece of scattered shell, start upwind, then gingerly work the area as anglers fan-cast in every direction. When we hit a fish, I mark it. When we hit another fish, I stab the Power-Pole down and work the area more soundly. When the action slows, I pull the pole and keep drifting until I mark another school.

A solid sonar with water temperature and mapping capabilities is a reliable friend when traversing the estuaries. The sonar shows bottom undulations and what we call "towheads," or protruding clumps of shell. Often, trout are found tight to towheads, since shrimp, mullet and shad use the oyster clumps as refuge.

We break out the topwaters in April. The myth that surface plugs only work in shallow water is just that, a myth. My largest speck of all time, a 31-incher, was fooled on a chartreuse-headed, black-bodied, prototype MirrOlure Top Dog in seven feet of water out of a boat at high noon.

One of my most memorable days with a topwater came at the Sabine Pass jetty as I consistently duped five-pounders against the granite in 14 feet of water. I can still picture the nine-pounder that followed my dad's plug to the boat. Topwater plugs only work when you throw them.

The weather will dictate which bay we fish in April. Light winds and green tides are conducive for finding heavy trout over deep shell in East Bay. Southerly winds and an incoming afternoon tide coincides with fishing over schools of glass minnows in West Bay.

Any way you choose, Mama's Chicken, Chicken on a Chain and Red Shad Bass Assassins should do the trick. MirrOlure Soft-Dines and Down South Lures are also good choices. Pluggers choose floating She Pups and Super Spook Jrs.

If the past two Aprils hold to form, I expect to release multiple 30-inch trout from my boat. And that's no April Fool's joke.