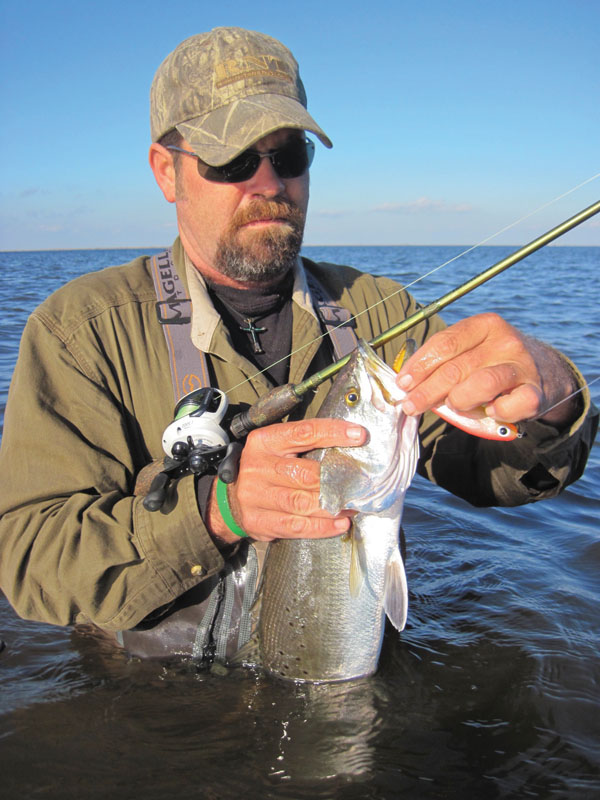 If I had a plan for April I would happily tell you. Truth is, I don't know what April has in store until it gets here. It's different every year–every day really.

I have caught some heart-pounders on the edge of East Matagorda Bay on an incoming tide. Those big trout stage in the deep water just waiting for a swollen tide and rafts of mullet to pour over adjacent mud flats littered with shell. I wait on them with a topwater and smile when they bang it.

Where we fish in April is determined daily by changing winds and water temps. If winds blow over 20 knots, we roll to the back lakes in West Bay and work redfish. If winds are less, we work the middle of East Bay for springtime speckled trout.

That's not to say I won't be wading. There are some awesome trout to be caught in April.

We are looking forward to seeing how all the freshwater from 2015 will affect this April's fishing. We haven't had a true glass minnow run in Matagorda in years. Of course, until 2015, it hadn't rained in years.

Many of my captain buddies have spent mornings at the dock talking about how we bet the glass minnows will show up this year like the good ol' days. Our bays are in awesome shape. Walk in a back lake and there are little shrimp everywhere. Wade a bayou and watch all the little crabs scurry away.

Our winter fishing was great this year, better than I can remember for its consistency. March has been just as good thus far. Fish were where they were supposed to be and in good numbers. That's why I am so optimistic for April.

Glass minnows are really just bay anchovies. Little white and silver flashes that swim in herds and likely being swarmed by hundreds of brown pelicans, trout and redfish. When the fish go-off and gorge on the big balls of minnows it can get really silly. I have had redfish swim between my legs blowing minnows out of the water.

The good thing is some of the best wading happens on afternoon incoming tides. Get a good night's rest, get up, read the paper, eat a little breakfast and head out. Take your time and wait for the tide to usher the minnows to the grassy shorelines of West Bay. Catch 'em till the sun goes down.