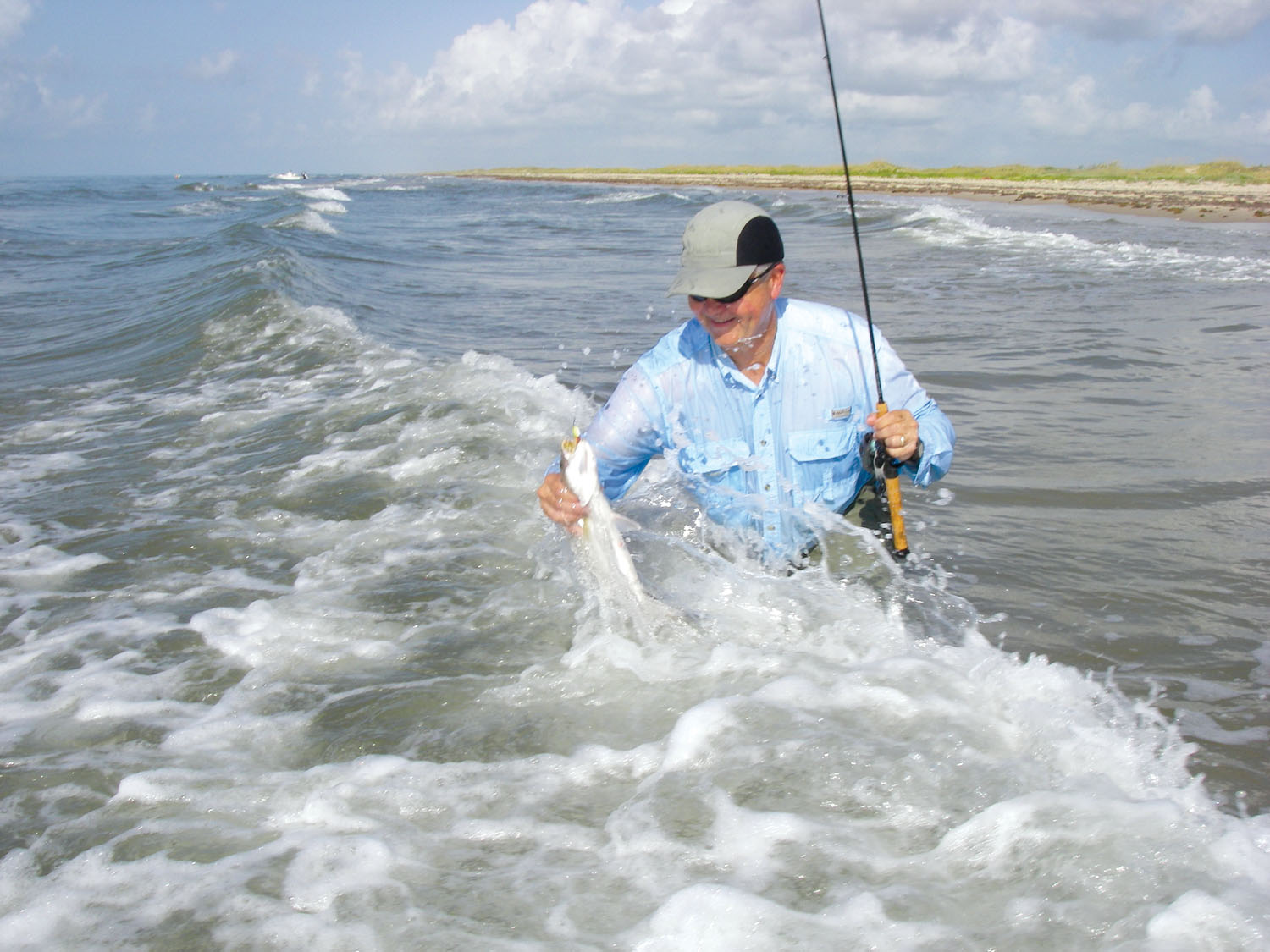 We will take advantage of surf action every day that conditions allow.

August is often categorized as the "heat" of the summer. I kind of like it, though, especially on those almost windless days when "cold" fronts stall and the bay glasses. Every piece of water becomes a player; and, any captain loves the problem of "which way to go" when multiple options exist.

East Matagorda is a unique estuary and its takes time to learn its quirks and summer patterns. Often west winds blow early, then calm to nothing around mid-morning. That means the bay may be off-colored early, but patient anglers know in August the wind lays, the bay greens and becomes streaky.

By streaky, I mean streaks of green in the middle of sandy green, perfect ambush areas for aggressive trout; and, large schools of redfish do circles in the bay and many times leave small slicks alerting their location on a falling tide.

Though the water may not be appealing to the eye, trout continue to eat in off-colored water. We manage to catch some nice boxes of fish by being patient and waiting for fish to slick late in the morning.

When the water gets this hot, most of the trout leave the shorelines in East Bay during the day. Right now, the best fish in East Bay are in the middle in about five feet of water and just off the dropoff for waders fishing mid-bay reefs. Here's a little secret: when winds go calm and the surf gets flat, you can have all those reefs to yourself. Most anglers will be pointing their compasses toward the surf.

I have had some amazing days in East Bay while every other boat was in the surf. More often than not, when the surf is hot so is the bay.

While we are talking about the surf, the few days we have been able to fish the beach have been fabulous. I can't remember the surf being as consistent. Four days in late June and early July were the best I have seen in 20 years. We caught fish everywhere we stopped.

Normally, when the surf clears you have about two days of good fishing, then mackerel, sharks, sometimes kingfish and bluefish move in to the first gut and send trout running for cover. All of the above showed their faces during the above-mentioned stretch, but the trout remained. I think it had to do with so many shrimp on the beach. You know the shrimp are thick when you toss a topwater and hook a shrimp, multiple times, on the retrieve. So, when the surf goes flat in August, you can bet I will be there.

When not in the surf, I'll wade West Bay as close to Pass Cavallo as I can get, especially on days with weak tides. Tides are going to be strongest around the pass, so maximize your opportunity by finding a prime piece of sand and grass where the current moves the most. Toss topwaters early and don't be bashful about sticking to the surface through the heat of the morning.

No, we don't stay out and bake all day. We leave the dock about an hour earlier than normal and then hit the dock again before we roast, just in time for a cold glass of iced tea.